NASA released the Dawn spacecraft captured the image, showing the Ceres crater high resolution photos, details, the images taken by Dawn spacecraft in low orbit. Image shows the Ceres unprecedented terrain, the new image taken in mid December, the orbit height is only 385 kilometers, each pixel resolution for 35 meters. Dawn in the remaining tasks will keep the orbit altitude and comprehensive imaging observations of Ceres, at present there are still some details not captured. 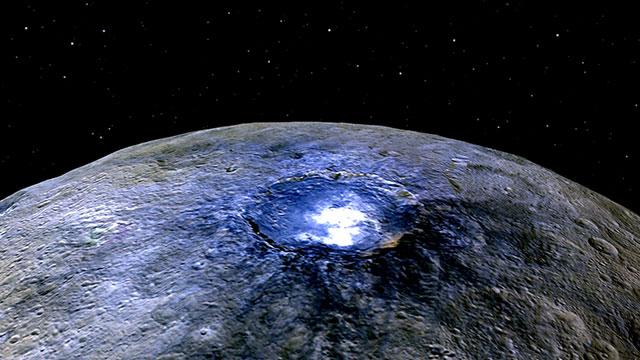 Dawn spacecraft NASA will continue to seek answers in Ceres.

In the absence of the details of the shooting, there is a very important, that is, the mysterious bright spot, internal white spots appear, researchers have proposed a number of theories to explain the presence of bright spots. The latest study pointed out that this is the water or ice residues in salt deposit evaporated to form a large number of reflection spots. The Johns Hopkins University Applied Physics Laboratory, a planetary scientist Andrew Rivkin, compared to other dwarf planet, Ceres real difference is that it's too big, Ceres and complex structure of the crust and upper mantle, why Ceres how special. At present, it is still not very clear.

Ceres crater remains a large number of terrain from impact stress formation, despite the relatively small volume of Ceres, only 940 km in diameter, but the inner structure is very special, this is Ceres is a charming place. Previous research has pointed out that the origin of Ceres from outside the solar system, because we found some special elements in the Ceres, but this view is just speculation, there is no solid evidence. But Ceres is certainly out of the ordinary, Dawn spacecraft NASA will continue to seek answers in Ceres.

Dawn spacecraft mission chief researcher Chris Russell believes that the we continue to Ceres imaging observation, every orbit height in reducing, we continue to review previously proposed various assumptions, and one to verify or refute, gradually approaching the mysteries of the valley God star. The two new studies that Ceres bright spot for salt deposits, not ice material. At the same time, the researchers also found ammonia rich clay.

Our measurement results indicate that Ceres the ammoniation of layered silicate, and found no substantial water ice, scientists believe that these substances comes from outside the solar system. The Dawn spacecraft science team member Paul Schenck found that Ceres geological structure is also very special, it will bring us more great surprise.