Tencent to China Win 10 Mobile sentenced to death? Stop the development of the whole system application 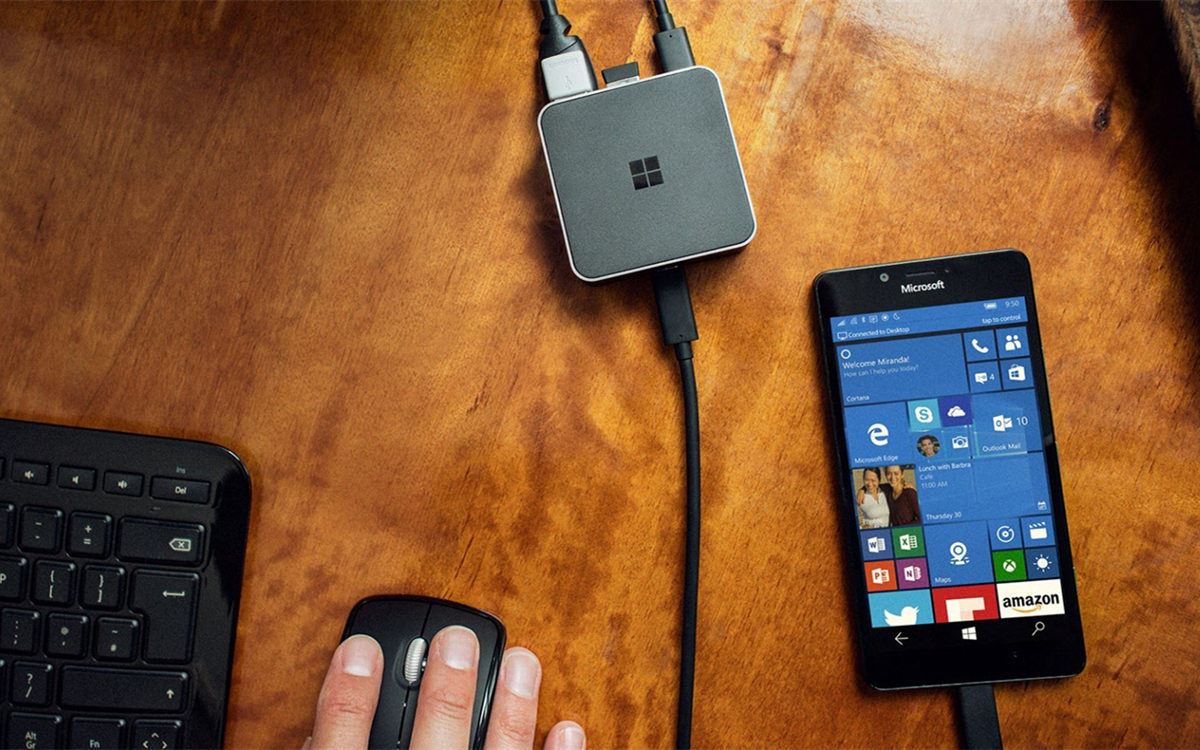 In this let the Windows mobile phone users breaking news before, may wish to look, last time, Microsoft and Alipay.com.Love and hatred.

In March 10, 2015, Apple announced in the spring conference Apple Watch listed details, micro channel, Alipay etc. become the first batch of third party Chinese application, because Alipay first time on Apple Watch platform of the new version of WP, but Alipay.com has not been updated, many of the key functions of the lack of user experience, completely unable to with iOS and Android version compared to Alipay.com and no cash plans to update their spoken.

Such a gap angered some WP users, they have not civilized language back Alipay abuse in the official microblogging wallet, Shuabing up to about 270000 comments. 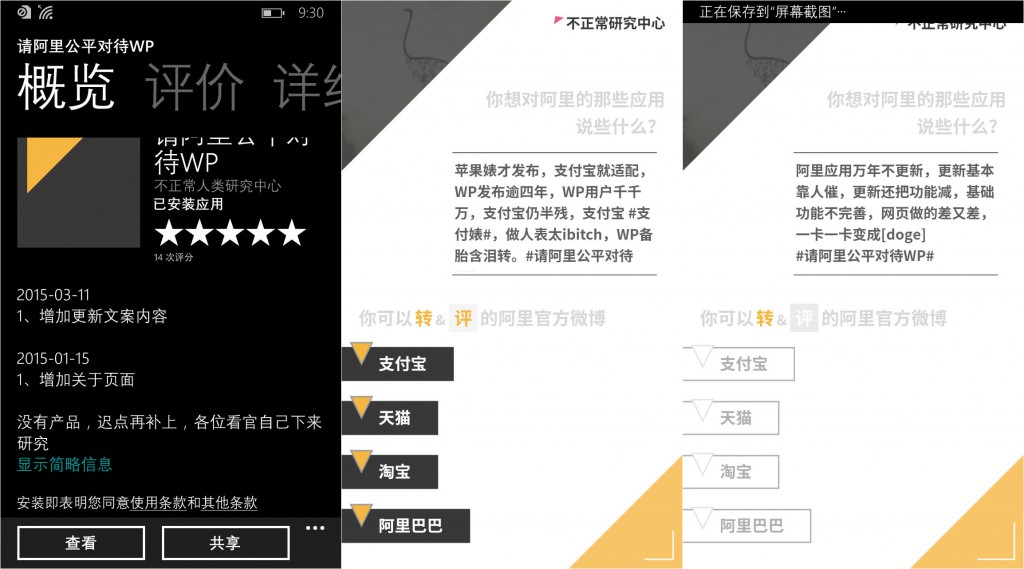 Although at the time of WP in the domestic market share of only about 1, but this time back Alipay.com operations, WP users showed great fighting capacity, finally forced the Alipay.com release of recruitment, the recruitment of WP developers and designers, the event was able to quell, although still unable to see what improvements Alipay.com. Pay a small friction between Po and WP also has not been broken.

To be honest, compared to Tencent and Alibaba and other manufacturers, Alipay in WP development and application of this thing is not hard, Alipay.com and Taobao WP client is a full range of perfunctory, the two that score in the app store only about 2 points (out of 5).

Even Tencent is also discouraged?

In these two days, many channels are exposedDialog screenshotTencent said, stop the development of whole system used in the Windows 10 Mobile platform, developers have changed, only the maintenance personnel. That is to say, unless Tencent back from the brink to rally the team, Tencent's WP application won't update, and original answer of 10 Windows Mobile for the uwp application is likely to not. Subsequently, we also contacted Tencent insiders confirmed that this is true. 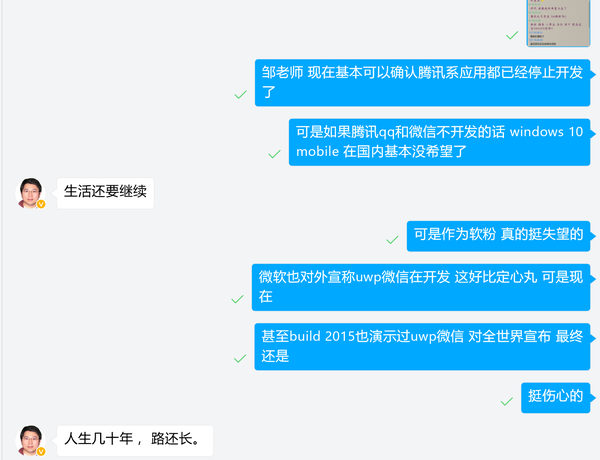 Sources said, WP QQ development group has been dissolved, and now the team is only in the daily maintenance, but also about to withdraw. The original team members are also part of the turnover, some were transferred to other projects.

Although Tencent for some applications to do the update, change the uwp architecture, but may be due to the reasons of development progress, not some Tencent application to complete the uwp application, they did not according to the windows Tablet PC or do adaptation. Last time I in the experience of the lumia 950 found currently supports continuum model used in the form of PC are some of the official Microsoft applications, such as edge browsers, office three piece suit and so on, the use of PC experience and not too many differences.

As for other Phone Windows applications, such as micro channel and micro Bo on the phone, you can not be used in Continuum, these applications in the display of the beginning of the interface is a gray scale display, said it is not available.

Once Tencent really make this stop developing applications for the uwp's decision, then the is still in its infancy in China windows 10 mobile ecosystem is undoubtedly a huge blow. Prior to this, Tencent has been Microsoft in China's close comrade in arms, starting from the WP 7 is for Microsoft application development, although the application development progress is often less than IOS and Android, but basic functions will be guaranteed.

Tencent Ali WP in Chinese hard, how to do?

In fact, because the market share is too small to, to appeal to the developers of minimal, to WP application or Tencent Dachang, either cherish the love of the developers on the platform. Earlier "As a minority, WP the 1 situation is not goodHas said, when the WP 8 came out, many developers still have hope and enthusiasm. But with the passage of time, WP's development situation we have seen.

I had said, for independent developers, in the WP for development work, thereby settle down is not realistic. In fact, our product director was once a WP developer, has also been published in the joint WP development tutorial. But for now, it's just a past experience and memories.

I often talk with him about the WP thing, I remember once, he said they WP developers have a group earlier, to facilitate the exchange of things WP development. But now the things discussed in this group has nothing to do with WP, the group of people are now engaged in career away from the WP development, most of the shift to the iOS development.

Developers of the loss, for a platform is a slow process, and Tencent abandoned is to give WP a heavy blow. QQ and micro channel as two heavyweight national application later don't update, only maintenance, will definitely blow to many users want to switch and following WP.

Tencent WP development team leader said that the Current Windows 10 mobile officially released still bounced, WP users flow Android and IOS, their WP team has begun to assume the task of development of the other platforms, temporarily does not add new features, released a new version. There are also Tencent employees said their Android and iOS developers also need to deploy tight, WP team. Judging from the interests of the enterprise, weighing the future of the various platforms, re arrangement of human resources can be understood as the corporate behavior.

WP the problem is that Tencent

Prior to the application store in WP, see such an update note, from a WP developer is still in the university: 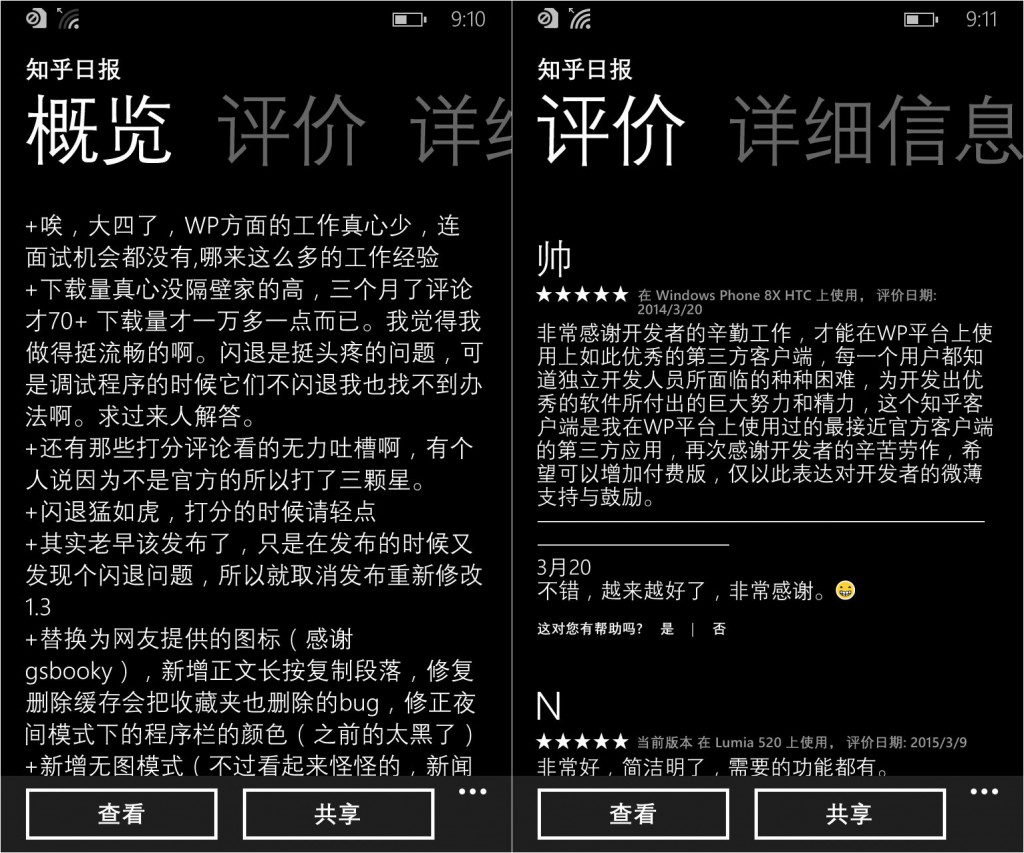 So before the WP eco appeared mature developers to switch to IOS and Android, new developers can not find direction and guidance and even work, now is Tencent such manufacturers began to despair, WP behind the developer community appeared full range of escape.

A system without the developer support, sooner or later there will be no consumer support.