According to statistical data show that the United States has 54 million disabled people, about 20% of its total population of the United States. To help a large group of people with disabilities, Google focused on Chromebooks, Android system to launch new features to help these people with disabilities. Google director Andersson Eve said: "a few weeks ago we launched the first N Android system developer preview version. As part of this update we now bring visual settings. When the user activates the new Android device, it can let people enlarge the screen, adjust the font size and set the text prompt settings, etc.. Visual settings will be used primarily to help users with visual impairments to use their devices independently." 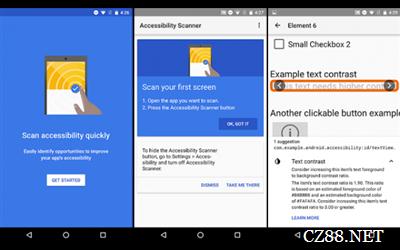 For those who cannot use the touch screen to the disabled, Google also in the new Android system added (voice access) voice access test function, allowing each Android users can through a command language to operate a smartphone or tablet.

In addition, in February this year, Google announced that the Chrome browser Docs Google has supported voice based input, editing and formatting. Andersson now says: "each Chromebook is equipped with a built-in screen reading extension ChromeVox, allowing users to visually impaired users through the tool menu is very easy to activate the voice input feature. And the latest version of the chromevox next beta also includes a simplified keyboard shortcut mode, the new title panel display speech and Braille output, and new voice navigation system. "