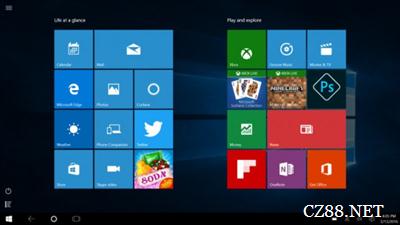 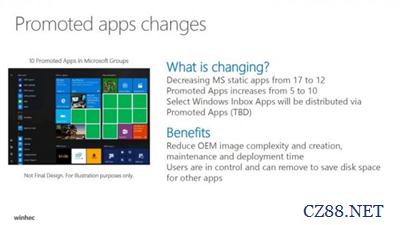 Apps Promoted is considered to be a programmable magnetic stickers, although it seems that this application has been pre installed on your PC, but will jump to Store to download and install the. From the slide below you can see some of the applications are already pre installed on your PC, which is the most obvious Crush Candy game, after Microsoft has promised to pre install Windows 10 PC on the road. Another familiar magnet is Microsoft's Collection Solitaire. Naturally, all of these applications are easy to uninstall, and choose not to screw on the start menu. 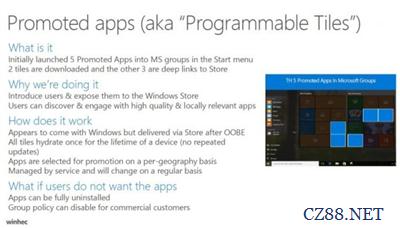 Related news
Hot news this week
ASUS main board leads Rog day fans Carnival highlights
Gree's response to "being disqualified from winning the bid": a mistake made by the bidder in sorting out the materials
IPhone 12: it's more like throwing away the charger
Apple wants to know: what do you do with the charging head of the old iPhone?
Luo Yonghao comments on ideal one: Tesla Model 3 is not a car of a level at all
A 400-brand evacuation Facebook： the internet giant strangled?
The dotcom bubble? U.S. technology stocks surpassed their 2000 highs relative to the S & P 500
Tesla's warranty service suddenly shrinks: touch screen and media control unit halved to two years
Samsung and research team found a new semiconductor material: amorphous boron nitride (a-bn)
Tesla's warranty service suddenly shrinks? Official response: the truth is here
The most popular news this week
Recycling treasure: iPhone users contribute a lot of high-quality second-hand mobile phones to the society every year
HuaweiMate 40 film exposure: standard version also curved screen
All three ports can reach 65W. Meizu super charged Gan charger is on sale today
How to Force Windows 10 to Always Select a Specified Browser and Search Engine
Native scrolling screen capture will not appear in the final version of Android 11 (Figure)
More than 100 million Android devices have been installed in the five months since its launch. The Android version with the fastest adaptation rate (Figure)
IPhone 12 series memory exposure: Apple wants to go up to 6GB
Is GitHub open source code subject to us export control? Linux foundation white paper official announcement answer!
Google launched open usage commons, IBM has objection to trademark transfer
Six banks? China will receive 10 billion bank credit line