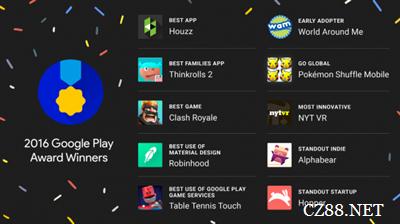 These awards do not distinguish between the mobile phone, tablet or smart watches application category.

Half of the winners are game applications, the vast majority are free, but contains the application of the purchase mechanism. The Royal war clash Royale "won the best game award," hopper "won the award for outstanding new applications (Standout startup) - this application is also very practical. It can flight price analysis, predict how changes in the price, and for the user to push notification, so that the user can find the cheapest flights.

"VR NYT" to get the most innovative applications, which contains a series of New York Times staff to create the video, and turned into a virtual reality can be used for the video.

Play Awards Google the biggest winner is "Houzz", which is an interior design application. "Houzz" in Store Play there are millions of downloads, which provide a large number of home improvement pictures, so that users understand the contents of a variety of interior design.

Design and application of the best Design Robinhood - Material

The most innovative applications - VR NYT

Adopter World - Around Me Early

Towards the International - Shuffle Mobile Pokemon