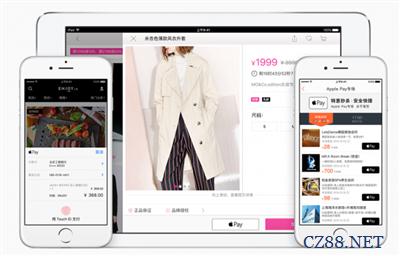 Also it allows users to very surprise is that Apple announced Apple Pay will launch a Web version, that the future can be achieved through Safari using Apple Pay payments, while in iMessage Apple Pay will also integrate some of the functions, allowing users to chat while turn a side account to send a red envelope or something, in short, Apple pay will become more and more powerful, become the preferred online payment when users just around the corner, but users can also timely conference, China expressed their views: Oh.

February 18 this year, Apple Pay officially in mainland China on the line, due to the short time too many registered users, even once caused downtime, excited users holding their Apple phone into McDonald's, 711's, KFC and other businesses to pre-empt Apple's experience fast and convenient payments. But Apple seems too eager to seize the market, not ready any time to adapt to the user and the merchant, when small series phone up to say Apple Pay, cashier raised his customary sweep transcoder, so within a period of time thereafter whenever I choose Apple pay directly say "flash CUP pay" waiter can understand.

The iMessage integrin payment function is to allow users in China some "inexplicable", if it can be regarded as innovative then we have experienced more than two years. Our e-commerce development has been the forefront of the world of online shopping for the user's life provides a great convenience, but, also will be the rapid rise of online payment, Alipay, micro letters and other third-party payment platform, replacing the original payment , payment using a mobile phone has become a new trend.

In contrast difficult to find, Apple Pay in any way will not be nearly Alipay, micro-channel rivals, and even loaded to force in value slowly decreases. Bank card binding from the start, since Apple Pay direct cooperation with the CUP, so long as the bank card UnionPay logo, and most are supported, tie card procedure is not complicated quickly completed, the payment process it? As long as the NFC sensor area near the dedicated POS machine without entering a password (different banks may need to enter a password), the payment can be completed in just one or two seconds fast, since no network, unlimited use of the environment than micro-channel pay much faster treasure. But in addition there are other advantages do it fast? I'm afraid not!

Apple Pay is currently still only in use on the iPhone, Android users can not experience, but the number of iPhone users is limited, if you can not achieve full platform coverage, to occupy the market is almost impossible. In addition, support for Apple Pay business is limited, want to build high-end Apple can understand the idea, but after all, not everyone should go to Starbucks every day to drink coffee, go to Burger King hamburgers, yellow rice and chicken stew, spicy chicken is braised daily. We often see in the restaurant cashier put "Welcome to use Alipay," "Welcome to the micro-channel payment" on the sign, and even some street vendors will be posted big collection of micro-channel two-dimensional code, so no change or no money users can also sit down and eat a bowl of noodles at ease, but rarely see Apple Pay logo, in addition to push not to force, there are many other reasons.

Using third-party payment platform, in addition to fast outside of another important reason is that there are many opportunities for promotions relief, such as Alipay and many businesses will cooperate, either random promotions or full cut, for users is very attractive , the micro-channel pay the same. In fact, both online and or offline, online payments can always get some extra benefits, but unfortunately does not include Apple Pay, embarrassed.

Habit is a very wonderful thing, unconsciously develop it slowly, you might not notice it's there, but if suddenly it away immediately feel myself not meet, and not so much Apple Pay in Alipay, WeChat struggle, rather it is a struggle and user habits. Although it is faster and more convenient and safer, but many years of habit is not to say that change can be changed, even if the user is willing to try new things, and maybe recipient can not, micro-channel and Alipay can see the money directly into their own accounts, but Apple Pay is still unable to achieve the transfer between users, but the future may not necessarily added.

On the WWDC, Apple greatly praised Apple Pay has made various achievements, while giving the user paints a very bright future, but these are based on the US market in mainland China, even though there are millions of Apple Pay like beautiful, but also not worth a "full cut offer" to get rid of the dilemma if Apple do as well.