Millet research and development of SoC in the end how, and HUAWEI, Qualcomm compared to how much difference?

The day before, a new wave of exposure machine with millet real machine photos on the Internet, with respect to the new mobile phone millet the attention of netizens, more users focus to the mobile phone chip, according to a photo display, the mobile phone screen is 5.46 inches (there is news that is actually a 5.15 inch 1080P display) 8, nuclear CPU, the highest frequency of 2.2GHz, GPU Mali-T860 MP4, Ann Bunny run 63581 run of results about Qualcomm snapdragon 625 at the same level. 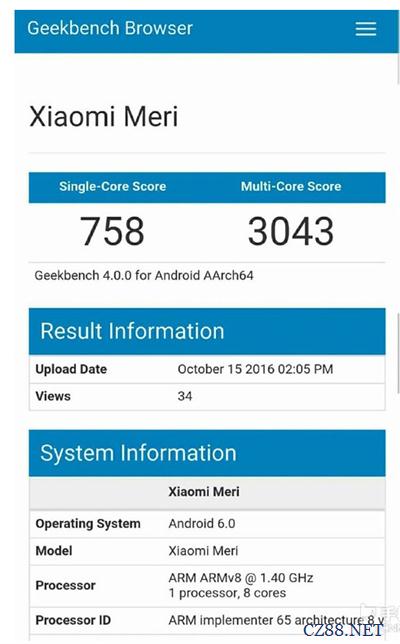 In addition, there is a picture on the system Android 6 and pinecone (pineal gland).

So, this is the phone SoC millet research and development in the end how, roughly equivalent to Qualcomm, HUAWEI which a product? Future development prospects and how?

As with any technology will not drop from the clouds will not appear out of thin air, millet, research and development of SoC is through support to external demand, and hard skills in 2 years of the results.

As early as the end of 2014, millet and Datang leadcore began a technical cooperation, Datang Telecom will be a wholly owned subsidiary of leadcore Technology Development Co. Ltd and has LC1860 platform to price 103 million yuan licensed to Beijing Electronics Co. Ltd. Beijing pine cones Electronics Co. Ltd. by millet and leadcore jointly set up a 51% stake, millet leadcore, holding 49%, English name is precisely in the real machine photos in pinecore.

It is thanks to the technical cooperation between Beijing and the core technology, making Beijing pine have the ability to participate in the development oriented 4G multimode SOC series chip products, and for millet mobile phone -- in fact, this is not the first open mobile phone chip for millet mobile phone equipped with the first by the leadcore developed products in early 2015, LC1860 was used for the red rice 2A mobile phone, and the volume of over 5 million, the market performance significantly better than the early HUAWEI Hass test water for K3 and K3V2, almost 910 Hass kylin.

Recent exposure of the SoC, the design of the pineal gland, is clearly the latest results of cooperation between millet and core technology, then the performance of this chip in the end how?

As for why not using 14nm/16nm technology, one of the reasons is because the 28nm HKMG technology is relatively mature, the mask cost about $6 million, significantly lower than the cost of the mask 14nm/16nm process; on the other hand is very difficult because the millet and apple, HUAWEI, Qualcomm, Samsung and other international giants to grab 14nm, 16nm chip production capacity, coupled with SMIC and the core technology belong to Datang Telecom Holdings, using 28nm HKMG technology SMIC will follow. In addition, using 28nm HKMG A53 technology in the performance is completely sufficient, and the 28nm manufacturing process is very cost-effective, it is also very consistent with millet Lei Jun / consistent style.

Although the use of 28nm HKMG technology in power will be greater than the 14/16nm process, will be some difference in fever and life experience, but the 28nm HKMG process has been able to suppress the A53 power, does not appear to have a fever that Qualcomm snapdragon 810. The bunny ran to see the situation, if the bunny didn't do special optimization of pineal SoC, in the running, the pineal SoC is obviously a high with 650 SoC Qualcomm snapdragon 625 and kylin.

Finally see the baseband, HUAWEI kylin and Qualcomm snapdragon 650 625 is the 7 mode baseband - contact VIA at once will be on sale in the hands of the patent, CDMA patents to MediaTek, immediately packaged and sold Intel, presumably HUAWEI CDMA patent authorization is similar and MediaTek (of course, may also be from Intel or Qualcomm bought, but this possibility is too small.). The core is not able to get a CDMA patent authorization, and therefore can only do 5 mode baseband, therefore SoC may not support Telecom the 2G and 3G in baseband and HUAWEI, Qualcomm baseband so there is a certain gap between manufacturers.

Datang joint core and millet cooperation is clearly a win-win outcome. For Datang core, millet looking for partners, not only can get a sum of money, but also find a stable platform for the core, the vertical integration model, Samsung Orion copy HUAWEI kylin. For millet, not only can be linked to the cooperation in the study of SoC design technology, but also to obtain the support of Datang Telecom in the communication technology. Especially in the patent on the relative lack of millet, the next step is to enter the international market, we must build up their own patent wall, or seek patent protection umbrella, the only way to avoid in foreign markets litigation tragedy. Datang Telecom as a traditional communication manufacturer, have accumulated in the communications patents, but mainly with TDS technology, owned by Datang Telecom patent of millet in overseas markets have a certain protective effect.

From now on can play the role of cooperation with millet, Datang Telecom, which not only helps to improve millet and Qualcomm, MediaTek negotiations in the bargaining power, reduce procurement cost of mobile phone mobile phone chip, compressed production costs, but also help to better grasp the pace of shipments of millet.

One evaluation of Beijing electronics research and development of SoC is in fact a pinecone leadcore vest, for this argument, I do not comment, but this understanding of the situation. Beijing is mainly composed of core employees pineal electronic triage staff and, in addition to many from other domestic veteran IC design companies heavily poached employees, such as millet was paid from the Loongson from technical personnel -- although due to ambition and Mao Zedong thought armed mind, the technical backbone of Godson is highly stable, but because of the dragon the core of long-term salary lower than the industry average, ordinary technical personnel or the face of high temptations. Although the pineal electronics in the wafer fabrication and packaging testing commissioned Datang joint core is responsible, but in the design of the SoC, the joint venture has been selected by the main beam, and has been initially designed with the ability to design SoC. As to whether the pineal electronic R & D SoC is Datang joint core products will vest, different people have different opinions about the.

Mobile phone chip as millet second models by the arm joint venture development, its comprehensive performance can reach the level of 930 Hass kylin, shipments are likely to reach 10 million, it is not easy. But as long as the millet persevere investment R & D, plus from Datang Telecom to obtain communication technology support and support from ARM can be CPU and GPU, after 5 years as there is no possibility of another is not a Hass kylin.

Millet to win the initiative in the publicity

In the past, millet fans have used the "dissatisfied run" to ridicule the friends of the business, after being HUAWEI fans "refused to make a U" hit back. So, now millet with the actual action to respond to the HUAWEI fans of ridicule, and this is just millet in 2 years with the joint core joint venture achieved technical results. This aspect with the actual action shows that the purchase of the ARM public version of the design and development of SoC is not difficult, but also to win the initiative in the promotion of millet.

In fact, the course of rise from the HUAWEI mobile phone, mobile phone the rise of one of the key factors is Hass kylin chip, successful glory 6, Mate7 and 920/925 series chip kylin God assists not to blame. And using its own chips to win publicity initiative for HUAWEI, to meet the full support of some kind patriotism of the Chinese people. At the same time, also gives HUAWEI Hass kylin technology aura, the corporate image even more tall.

Compared to the HUAWEI tall on the technical aura, millet in the media marketing has become tough, but on behalf of the lack of technology, in the propaganda very passive, HUAWEI fans that "not a U" even hit the soft underbelly of millet. The love for the mobile phone and the average price of high-end models of sales rising, while millet 2000 yuan grade mobile phone is very difficult to hit, rely more on low-end models to take the amount of red rice, one of the reasons for this phenomenon is that HUAWEI has acquired technology Hass kylin, aura, the brand added value to the support, while millet is there is no such a foothold in the fulcrum.

This time, the pineal electronic design SoC turned out, which solve the above problem, the millet fans can boldly respond forcefully against the ridicule a U, and the SoC is completely inferior in the comprehensive performance on kylin 930. More valuable is that the SoC is composed of SMIC foundry, and HUAWEI for kylin series chip foundry TSMC, taking into account the Taiwan authorities on the mainland Chinese but fawning on American ass, Japan, to the stooges, before the liberation army recovered Taiwan, Japan will not running as one of their country a lot of people. Therefore, from this perspective, the electronic design of the SoC in the "localization" degree, higher than which Hass kylin, can reverse the past millet dilemma in the propaganda, to win the initiative.

Finally, because the millet pineal electronic and HUAWEI Hass CPU and GPU kylin are purchased from ARM, the difference is only HUAWEI more money and capital to buy better CPU core and GPU core is integrated into HUAWEI, millet advantage relative to the pineal kylin in their own design SoC three:

One is the baseband integrated CDMA, can do 7 modules;

Two is to use the latest 16nm technology;

Three is the use of relatively high end A72 Mali and T880 ARM.

Due to CDMA back network is only a matter of time, then, the weakness of the base band millet will no longer exist. If HUAWEI can not develop a significantly better than the public version of the structure of the CPU core.

Then, in the near future, in the CDMA network back at the same time, if millet mastered to buy IP integration capabilities, costly purchase of ARM best CPU core and GPU core, and hit the money to get the best electric Taiwan semiconductor manufacturing technology, HUAWEI in the mobile phone SoC on the advantages of millet will not exist.