The anonymous social originator Secret was raised, because the U.S. presidential election

The anonymous social originator Secret is a short-lived star product.

Since the beginning of 2014 on the line, Secret in the store app ranking appeared on the rocket rise. But in August of the same year, this product ranking has plummeted to 1500 place. A year later, in April 2015, the cumulative amount of more than $35 million in Secret officialClose, and said it would not spend the money back to investors.

At that time the media on the evaluation of Secret is not optimistic about the one-sided, even the founder and CEO of David ByttowWrote that, they can not solve the problem of the application of anonymous entertainment. However, just last night, Byttow announced the Secret on the Facebook to the resurrection of the news, and said that this is a new version of the Secret. 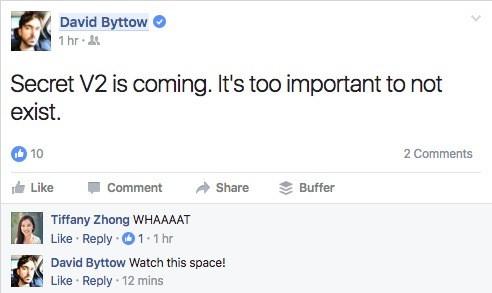 Which is difficult to understand, in fact, Secret in the Byttow will not be put into his next business ventureBoldIn. Not too much contact with Bold and Secret, which is a similar enterprise version of the Wordpress product, the user can edit the article by Bold, and then released, circulated in the company; if necessary, can also put the share to a larger range of.

So, seems to have turned up in the Byttow why choose this time?

On this issue Byttow my foreign media has made an explanation: all this and just past the U.S. presidential election related. Trump said this a few days after the election, nearly half of all Americans are accused Facebook of Using False News poll results, these people think that Facebook should be responsible for the false news, because of the deepening division of the country, as well as between conservative and liberal. (a small bar has stood out innocence)

In this way, Byttow seems to be more in the Secret on the sustenance of their own good vision, rather than as a commercial product to perform. Will this be a good thing for Secret? The new Secret and how to fill in the model before the defect?

Byttow did not give a more specific answer.

Related news
The linely group's best mobile processor of the year: God u Kirin 810 wins the title
"Generation God U" Kirin 810 gets The Linely Group's annual "Best Cell Phone Processor Chip"
Hot news this week
Rich AMD b550 motherboard: 55 models are fully exposed
Director Wang Jing! Tencent Video: see you on May 22
Huawei the cheapest 5 G phone! The Z 5G is about to be released :90 Hz Water Drop Screen Plus
Microsoft speed! Windows 10 2021 will come next month
Why does China's semiconductor industry not have to be pessimistic?
Japan's first listed company goes bankrupt: China Ruyi group's abacus fails?
Three generations of sharp dragon make new! Amd ryzen 7 3750x / 3850x exposure: 105W super frequency little prince?
Tao Lin, vice president of Tesla China Foreign Affairs: Shanghai Super factory is expected to refresh "Tesla speed"
Honda China and Tencent sign a memorandum of strategic cooperation to explore the upgrading of the auto network service
Seven manufacturers, such as Xiaomi, oppo and vivo, are too slow to join the mutual transmission alliance? On the spot
The most popular news this week
The wool party is crying! US $3 billion in unused gift cards per year: Starbucks makes 140 million in cash
Alipay flower buys 2 tons of Huanggang roll to give the high school student net friend: this hobby is heavy.
Samsung's black screen system crashed because leap made a calculation error in April and lost more than 1000 photos after users repaired it
Huawei holosens released the next generation camera, saying it would build the first brand of machine vision
HuaweiEMUI knuckles screenshot upgrade plan :6 glory by end of may
Pinduoduo Gmv "water injection" doubt: next lucky?
Tiktok is also needed to make chips. Official denial: false information
Wang Jian said that he and Ma Yun are like Haier brothers: two ignorant teenagers have a lot to do with each other
14nm technology has been mass produced in Huawei Kirin chip, 7Nm international R & D for a long time
American technology industry "big escape ": suburban refuge