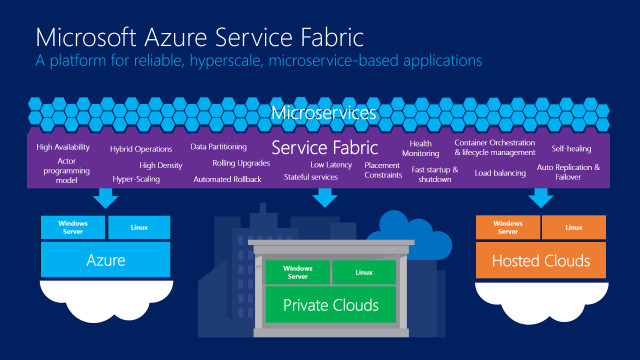 This paper is compiled by Lei Feng

Azure Service Fabric launched in 2015 for the first time, it was born out of Microsoft development and construction of the basic service structure, mainly used to support large-scale cloud services, including Azure SQL, Cortana and commercial version of Skype. It provides scalable and fault-tolerant services that run on cluster (virtual) machines. Service Fabric is mainly working on the Azure system, but the operating environment can be downloaded freely, and can be deployed in the local Windows system, even on non Microsoft cloud Windows virtual machine. Currently another version of the Linux runtime environment is also under development.

Microsoft has begun to use GitHub's tracking features to obtain the requirements and defects in Service Fabric. At the same time, users of the operating environment also expressed great interest in the design and function of the Service Fabric. Open SDK is considered to be the next step in the Azure service framework to participate in the developer community, and the development direction of the framework has played a role in promoting.

However, for Service Fabric open source, the company's attitude is more cautious than previous projects, such as.NET, Chakra and Edge browser JavaScript engine. Service Fabric was developed as an internal service, so the entire development process uses a secure tool. To open source, these issues must be addressed. First, the tools need to be upgraded or open source; secondly, the service should be stripped out of the other systems.

Azure Service Fabric in Microsoft's many services assume an important business, which will make the process of open source tend to be conservative. It also means that open source Service Fabric will not be as smooth as the core of.NET, because the.NET core open source project led by the independent oversight committee, and received a lot of community contribution on GitHub.

Microsoft has no plans to open the Service Fabric SDK, the reliable data sets support will be missing, and open source in the early work will only in small areas, the public library code to source code time is not fixed.

Although the Microsoft development team does not promise future actions, but the open source process will continue. More SDK content, and even the service runtime environment is likely to be the future of open source candidates.

Related news
Hot news this week
Wechat has not done this function for N years! Use this app to make up for the defects of wechat
Gree's response to "being disqualified from winning the bid": a mistake made by the bidder in sorting out the materials
IPhone 12: it's more like throwing away the charger
Apple wants to know: what do you do with the charging head of the old iPhone?
Microsoft official free data recovery tool windows file recovery experience
Amazon cancels disposable plastic products in India
Luo Yonghao comments on ideal one: Tesla Model 3 is not a car of a level at all
Tencent magic change Yang surpasses video self mockery: I'm a simple and honest fake spicy sauce lost 16 million
A 400-brand evacuation Facebook： the internet giant strangled?
How long can "Laoganma" carry on after winning Tencent?
The most popular news this week
Baidu Linyuan leaps: great strategic determination is needed to adhere to the core technology innovation in the end
Cellon 865 Plus 120Hz millet 10 super cup fast: price straight to 6000 yuan file?
Americans try to disinfect borrowed books with microwave, and the library posts for mercy
Samsung and research team found a new semiconductor material: amorphous boron nitride (a-bn)
Operation of the mystery: the Internet Archive is regarded as the CDN of JS file by the Bank of Barclays
Another delisting from the US? Sina CEO Cao Guowei's privatization proposal received
2000 cheaper! Qiong version of iPhone is popular
Chinese manufacturers dominate 5g telecom equipment: Huawei / ZTE takes 48.9% share
According to the news, Samsung's next generation of foldable mobile phones is named Galaxy Z fold 2
Sina, which has been listed in the United States for 20 years at $41 A share, has received a privatization proposal