The global data generated every day more and more, but when almost all computer manufacturers have chosen "stack more computing core" to deal with the problem, HP has given a different direction of development and mdash ; Build a completely different computer architecture. Hewlett-Packard Enterprise (HPE) has just shown the memory of the center of the "& quot; The Machine & quot; super-prototype, 40 nodes can share 160 TB of memory resources, making it the world's largest single memory system. 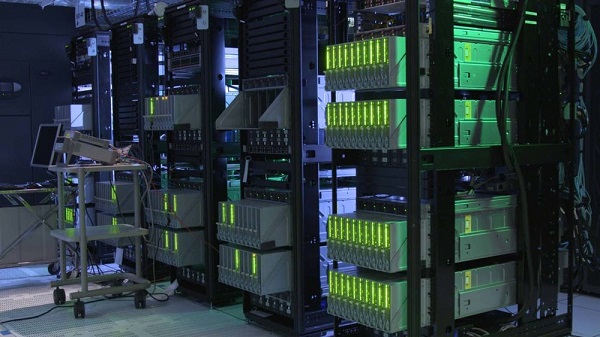 HPE show "The Machine & quot; prototype, using the memory as the core of the system architecture.

Traditional computers are built on a series of processors and need to decide which task to vote on each time.

However, even though it can be further divided into more cores and threads (to help them achieve multitasking), each processor can only rely on a specific part of the memory resources, so that each other in the negotiations wasted a lot of time and energy.

In addition, if the memory and peripherals to migrate data, it will cause more waste. In order to speed up the industry came up with many ways, but it is always difficult to break through the bottleneck of existing architecture.

In view of this, HPE on the line to completely break the routine, focusing on digging the potential of large data "The Machine & rdquo; project. The company will be the core of the new architecture called "memory-driven computing", given all the processor access to the entire shared memory pool permissions.

Unlike the standard computer, which separates different processors, HPE's "The Machine" allows each processor to access the entire 160-TB memory storage pool.

By using nonvolatile storage (NVM), all data can be processed and stored in the same place, eliminating the delay that will be sent to different parts of the system.

In addition, each component is not only interconnected with the level of the system, because the memory-driven computing using a global protocol, so The Machine can be more efficient and modular potential.

Thanks to photon communication (rather than copper), communication between nodes is also accelerated. The use of fiber ribbons allows nodes to become smaller, faster, and cooler, more energy efficient.

Not only that, The Machine's scalability is also commendable. HPE said that the future version of the machine can pile up an absolutely incredible 4096 YB memory pool. (1 YB = 1 trillion TB, the middle of the two units are also separated by PB, EB, ZB).

HPE Chief Technology Officer Mark Potter said: "We believe that memory-driven computing is the industry's best direction of development, we released this architecture, can be applied from cutting-edge intelligent devices to supercomputers and other aspects of the"