Sogou's AI story, another change of the way? 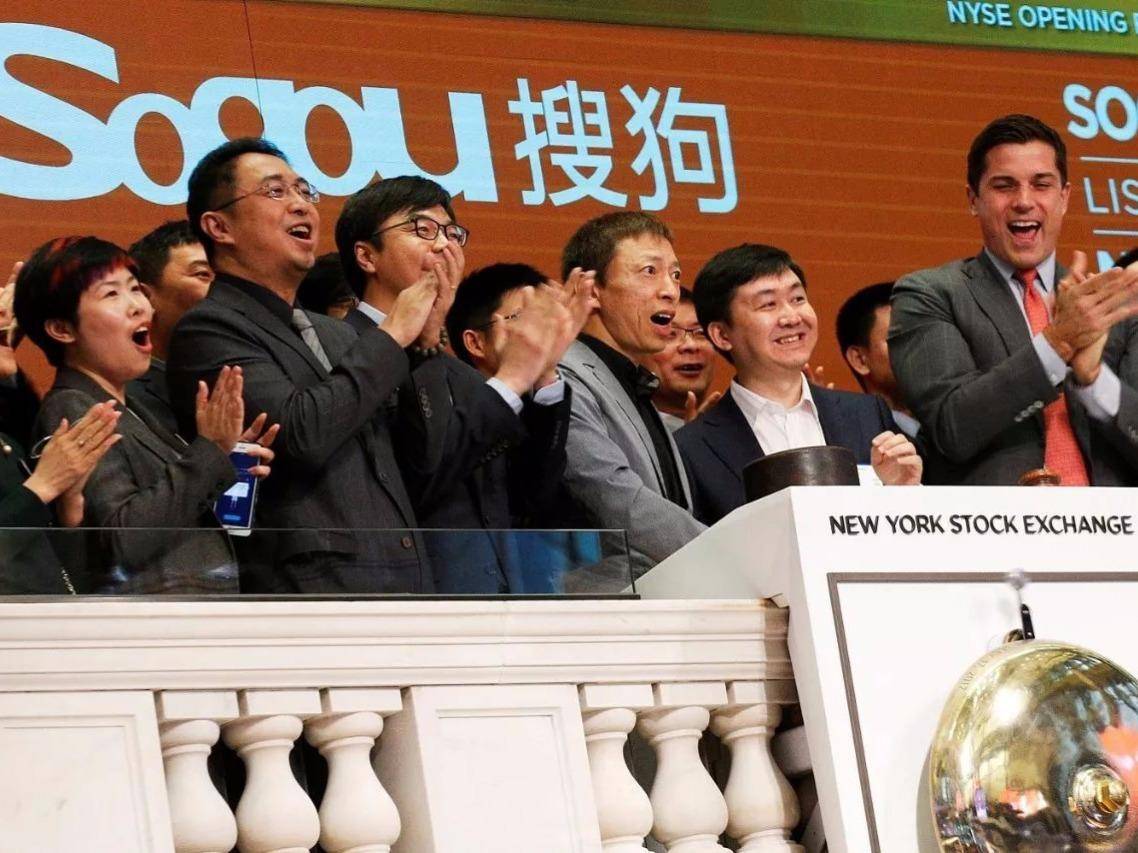 Stock temporarily for the first time.

November 9, 2017, Sogou listing on the NYSE, issue price of 13 US dollars. Within a week after breaking below the issue price, the December 29 closing price of $ 11.57, the market capitalization of $ 4.53 billion, compared with the initial listing, the market value evaporated by 14%.

Wang Xiaochuan dormant for 14 years, finally ushered in the company listed. Sogou known domestic "AI first stock", mentioned in the prospectus more than 90 AI, but from the stock price, it has yet to be favorable for overseas investors.

"I am not satisfied with the current price of Sogou. "A few days ago Wuzhen Internet Conference, Zhang Chaoyang said.

Wang Xiaochuan's explanation is: "After the listing, we have not made an earnings report, the market is in a vacuum, the Americans do not understand the pattern of sogou. I think wait until the hair three times earnings, will continue to have established trust and recognition. & rdquo;

Charles Zhang and Sohu, is still the largest shareholder of Sogou.

Sogou from birth, it has been high hopes. Baidu listed in 2005, Charles Zhang said Sogou traffic flow in more than a year Baidu, does not rule out the possibility of future independent listing.

After that, Sogou grew up with rumors of Ali, Tencent and Qihoo 360. In 2010, outside the publicity 360 intends to buy Sogou, Wang Xiaochuan alone to Hangzhou, persuaded Ma investment Sogou. Sogou spin-off from Sohu became an independent affiliate, Ali, Yunfeng Fund and Zhang Chaoyang funds were invested, Ali holding 10.88%. Two years later, Ali sold the shares it held to Sohu.

In 2013, 360 rumors of the acquisition of Sogou rise again. This time, Wang Xiaochuan successfully brought Ma Huateng. Tencent 448 million US dollars stake in Sogou, and Tencent's search business into Sogou. 360 and sogou browser war was triggered, the root cause or search. "360 made a few remarks at the time, to the effect that the market can only accommodate two companies, meaning that it is the second. "Wang Xiaochuan memories.

Early 2017, after the announcement of Sogou 2016 annual earnings, Wang Xiaochuan sighed to black wisdom: "Sogou search to survive. "At that time, sogou plan IPO news of the year came out for the first time, Wang Xiaochuan is devoted to Gugu, all of a sudden lost 5 kg.

That meeting, Sogou side said it did not answer any questions on the IPO. However, when the wise-minded euphemism asked shareholders for pressure on swordsman's shoulder, Wang said: "We still have to pay for homework. & rdquo;

Because when the age of 14-year-old Sogou has become "over-gas" aristocracy Sohu Group, one of the few hands of the trump card.

Sohu's other three businesses, it is difficult to have a fundamental improvement in the short term, riding a Sogou Sogou, Sohu Group's overall financial performance plays an important role. For Zhang Chaoyang, who has brought Sohu and Changyou to the US capital markets, Sogou is the next one. 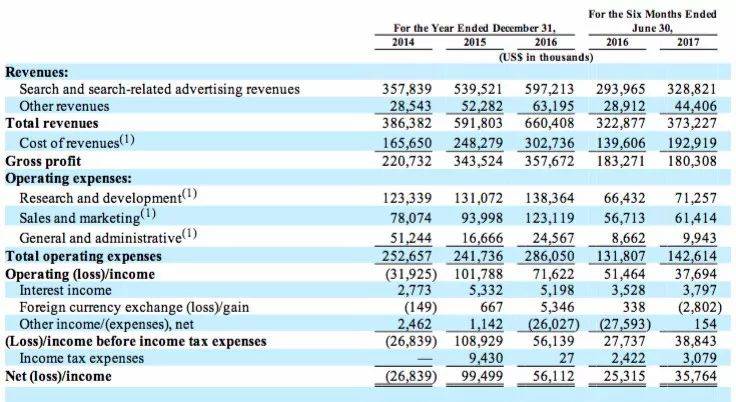 Source: Sogou current earnings, Note: 2016 data is based on the exchange rate when the earnings release

Is the accounting standards used in different periods different earnings? Net profit is a positive and negative, the gap is a bit big.

Recalling the earnings of Sogou, may be able to show that the growth of Sogou is not as plain as the original industry imagined.

If there is no Tencent 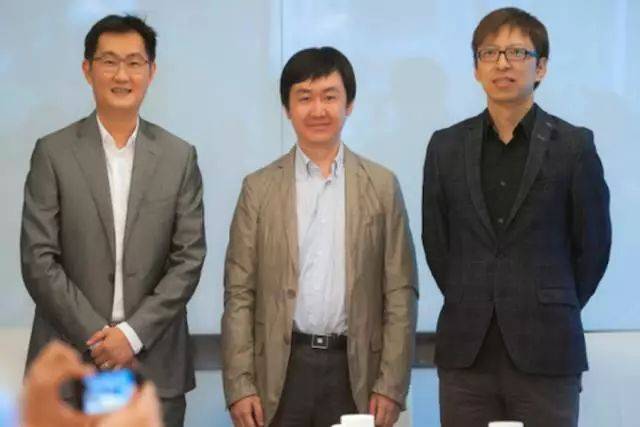 "Within three years, sogou to chase Baidu in the mobile search. "Wang Xiaochuan at the beginning of 2017, once said to black wisdom.

Wang Xiaochuan's "three rocket" (input method, browser, search) strategy, the industry well-known. Sogou input method is Sogou the most successful products, according to prospectus, the first half of 2017, Sogou input method of the monthly live has more than 400 million. Input method for Sogou user flow from the client into the browser, and then into the search engine, rely on search and related advertising revenue.

The effectiveness of this strategy has been verified in the course of Sogou's development. However, compared with Baidu, Sogou's body mass is still small. In FY16, Baidu posted 64.525 billion yuan in online marketing revenue (91.46% of the total revenue), while Sogou earned nearly 600 million U.S. dollars in search revenue. Wang Xiaochuan also understand that the Internet traffic dividend is disappearing in the mobile terminal "Betting", become the inevitable choice of sogou.

According to Sogou's 2016 earnings, as of the end of December 2016, Sogou search overall traffic increased 30% over a year ago, especially mobile search traffic increased 70%, the contribution of the overall traffic reached three-quarters. Sogou said in the prospectus, according to iResearch data, as of June 2017, according to mobile search query, Sogou market share accounted for 16.9%, is the second largest search engine; monthly live more than 480 million, is the domestic The fourth largest Internet company.

Sogou mobile edge, from the back of Tencent.

According to Sogou's prospectus, 21.8% of search traffic comes from Sogou's own products, 38.2% from Tencent's Internet assets, and 40% from mobile device manufacturers (mobile phones pre-installed) and other channels. Tencent is Sogou the most important source of external traffic, even with the mobile phone preloaded almost unchanged.

In 2014, Sogou search access to WeChat official account, becoming the only one to search the WeChat public number content search engine. Sogou continuous launch of the WeChat public platform search, WeChat headlines and other functions, as part of this user traffic exclusive owner.

Sogou acknowledged in the prospectus, which is also their own risk: If you reduce or stop and Tencent cooperation, the company's business will be greatly affected. 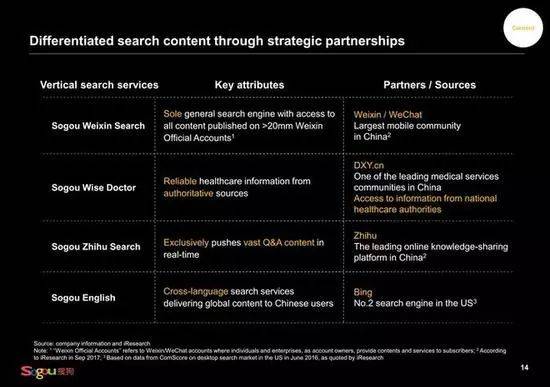 Sogou determined to talk about a search-oriented "differentiation", and serve high-end users, improve the quality of the search story. It is aimed at a major source of traffic is knowledgeable community know almost. In 2015, Sogou invested Tencent strategic investment know, in order to obtain the best quality content, in Q & A search force.

In spite of this, Sogou has not yet out of the stereotype of "rocket three": search and advertising revenue, supporting more than 90% of sogou revenue. The effect of "differentiated search" is not obvious.

Prior to that, Black Chi had asked "Sogou will learn today's headlines and other information distribution model", Wang Xiaochuan pondered after the answer: "The headlines today search is under pressure. We may go tempted, but this will not be our focus. & rdquo;

Baidu is not the old rival think so. Robin Li put forward in early 2017, to content distribution as the main strategy of Baidu. Baidu's information flow advertising effect is obvious: this year Q2, Baidu has announced that the information flow advertising revenue from the end of the first quarter of 10 million yuan per day rapidly rose to 30 million yuan daily. According to Baidu's data, Baidu's information flow into the fast lane, with 2017 third quarter results as the base of the annualized revenue of more than 1 billion US dollars. Another effect brought about by the same time is that in the third quarter, the usage of mobile phone Baidu users is 15% longer than the second quarter.

"Three years to tie up Baidu", if you want to achieve, Wang Xiaochuan rely on, not only one Tencent. In the absence of changes in the main business of the case, how to break through the performance of growth dog ceiling?

This requires another story on the outlet. Baidu is also strongly advocated, artificial intelligence.

AI doubt: how to landing?

Search engine companies say artificial intelligence, it seems to be due. From Google, Baidu, to 360, Sogou, is nothing less than that.

Wang Xiaochuan said that in 2016, there was a media questioning him why Sogou made a transition to artificial intelligence, and after he listened to it, "a belly of fire". In Sogou's opinion, the search engine itself is an AI; it looks like the search term is the result, but in fact, the search behind the massive data processing and understanding of the match. From natural language to images, video search, the direction of search evolution is to get a more accurate answer, which is the basic ability of artificial intelligence.

This is also the reason that Sogou names artificial intelligence issue in the United States.

Sogou submitted prospectus, Wang Xiaochuan also wrote in an internal letter: "No one will doubt the survival of sogou problem, the only suspense is whether Sogou subversion in the search field, whether in the field of artificial intelligence to lead a major innovation . & rdquo;

Wang Xiaochuan given Sogou artificial intelligence core is the natural language processing and natural interaction. In this regard, Sogou advantage is also obvious. "Our current voice input is the largest in China, with more than 200 million voice recognition requests a day. "Wang Xiaochuan said. This is all a data source for AI training. Based on the interaction of speech, images and other interactive modes, Sogou derives a more specific application direction: under the language of dialogue, translation, question and answer, voice to speech (TTS), Automated Speech Recognition (ASR) Voice recognition), the image is the face recognition technology and knowledge map.

But not just Sogou, all AI companies are challenged with two questions: how technology can be combined with business and come to market; and how to maintain its own market advantage as giants compete. 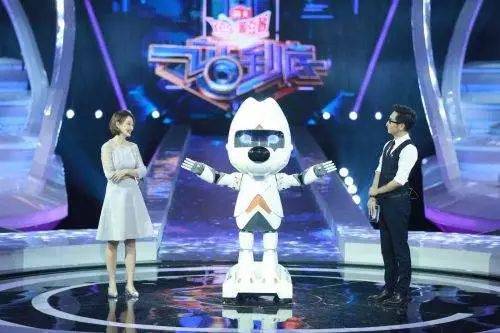 Wang, however, is more likely to be a demonstration of Sogou's natural language processing and question-and-answer system. There is no commercial goal. It is essentially the same engine that Sogou uses. Compared with Apple's Siri and Microsoft's Cortana, it is in machine learning and deep learning. And it doesn't go any further.

This is where Sogou is different from Google, Baidu, which is also a search engine company. Their AI research and development paths are all about voice and search. However, Google and Baidu are relying on their huge number of users and data, on the road of intelligent subversion of different industry scenes; Sogou is still just around his search business, walking a more

The choice of Sogou is also easy to understand. After all, its investment in AI can't be compared to big players.

In the prospectus, Sogou listed recent R & D investments of $131 million in 2015 and $138 million in 2016, compared with Baidu in 2016. The figure has reached $1.5 billion, not to mention that Mr Ma will spend hundreds of billions of yuan in three years

But the world has changed. Perhaps the artificial intelligence application market is great, but the giant war card has already begun, especially the voice market.2013, Baidu open voice platform, 2017, 2014, DuerOS open platform appearance; Ali established iDST intelligent voice interactive team, in 2017, the launch of the AliGenie voice platform; in October this year, iFLYTEK also held the first Developers Conference on their own, out of more than 1 billion yuan of funds to support the developers, and make the ecological, breath launched ten major products, including four major consumer scenarios.

Giant players are increasingly entering the field of AI, and have established a complete layout including basic technology, cloud platform, and software, hardware and application layer industry solutions.

Of the competitors, 360 had returned from the American delisting to A shares, but the strongest rival, Baidu, was still in. Despite fluctuating in search field in the past two years, Baidu has been rushing to the forefront of domestic search industry in 2017, relying on search information flow advertising and AI investment.

The dog was talking about it .

In this situation, the Sogou, before a single layout, will make his story more widely recognized and difficult to get to Wall Street.