Check it out! China Mobile is not secretly deduct you the money?

Recently, the reporter found that the phone was opened for a fee service, the operator said that for the telephone marketing I voluntarily handled, and call records and recording as evidence. However, when the reporter asked to show the opening certificate or "telephone recording", he was experiencing various operators 'mismatches'. 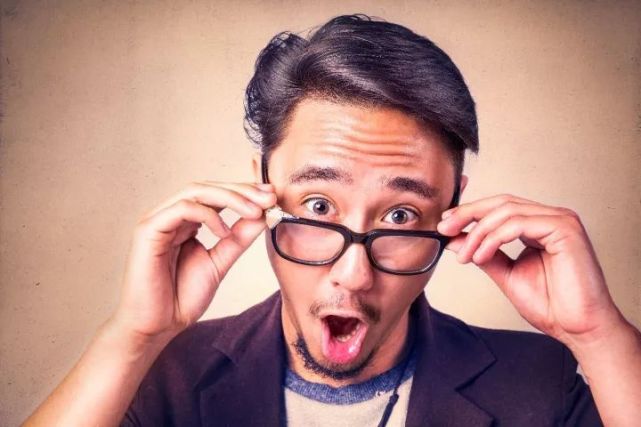 ▲ Photo Source: Visual China (Graphic has nothing to do)

Reporters found that the user encounters operators such sneaky "shadow service" is not deducted calls case, but because it is not easy to find, involving a small amount of high cost of rights and other factors, has not been given enough attention. Quite a few users Tucao: This "薅 wool" concealed deductions fee, it is "stab" It is difficult to prevent!

Recently, the reporter went to Tianjin, a mobile business hall to change the phone bill, after the business process was informed by the staff of the new package bound a service called "car assistant" service, 10 yuan per month, you need to call the artificial Taiwan to carry out cancel. Reporters then call 10086 mobile customer service phone operation canceled, but unexpectedly found this service has been opened and chargeback. 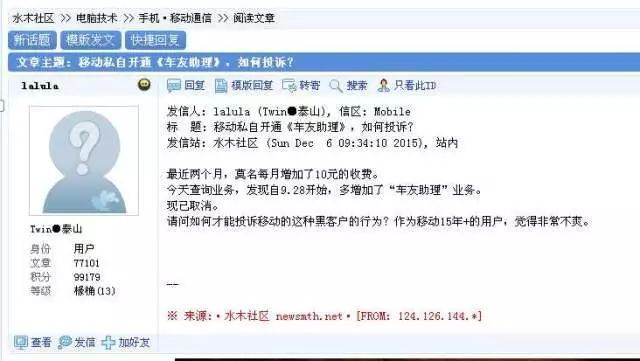 Mobile customer service staff informed that this business is December 5, 2017 through a Tianjin Mobile Office handle. Due to the lapse of time is not long, the reporter did not remember before opening this business, but never mentioned that business hall.

Subsequently, the reporter moved to Tianjin to reflect the situation, the mobile verification, the business hall does exist, but the registration address and business address is not in one place. This business launched by reporters is not handled by business offices, but rather by what is known as "outgoing call" (ie, telemarketing).

Because there is no objection to whether to handle this business, the reporter once again to Tianjin Mobile was reflected. According to the relevant person in charge of Tianjin Mobile Nankai Hongqiao Branch, the reporter handled this business on December 4, 2017 after a 157 number at the beginning of the incoming call to reporters on a voluntary basis, the call duration of about 50 seconds, and Call recording as evidence.

According to Tianjin Mobile staff revealed that this call is the Department of Business Hall staff telephone sales to mobile users, the content of the call to confirm whether the machine owner, and then introduced to the user fees related services and precautions, ask the user whether Handle the business. Staff spoke fast speed, the reporter did not consult the business content, just when asked to say "good" or "yes". 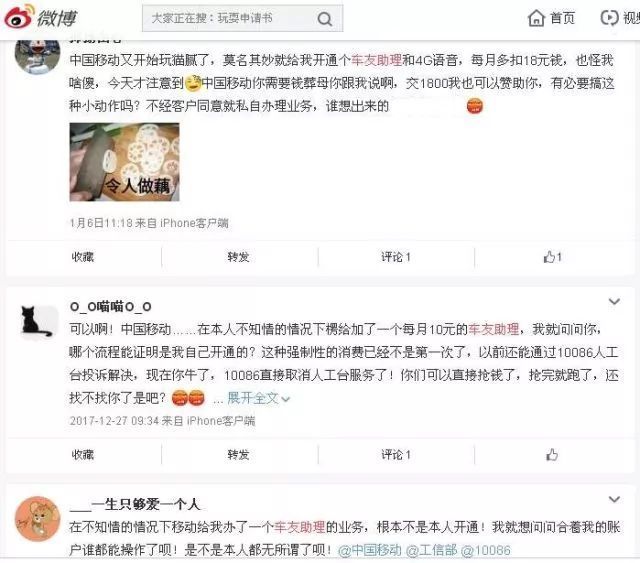 However, when a reporter questioned that the recording of the call might be suspected of fraud and requested the call from Tianjin Mobile, the mobile staff first promised to provide it, but then refused to provide the information on the grounds of privacy.

Reporter then call the mobile customer service 10086 consulting the situation, according to customer service staff said that customers can provide business recording, they immediately feedback to the relevant departments, up to 48 hours will give reporters a reply. As of 8:00 AM on January 29, more than half the time has passed since the recording was not presented to reporters on the mobile side.

Tianjin Consumer Association responsible person believes that the verbal promise of the voice call is the only evidence of the opening of the business, it is equivalent to consumers and operators entered into a "voice contract", then consumers to Operators to ask for a contract is justified, operators have no reason not to cooperate.

Reporters found that a similar situation is not the case. Online "Unconsciously for me Cheyou assistant business, how do I protect rights" without the consent of users, privately opened Che You Assistant, how to complain "and other topics lead to many users" sympathy "rdquo; & rdquo; .

"Check flow found more buckle of 10 dollars in the online business hall was opened Che You Assistant, I did not even how the car is likely to open this kind of thing? & rdquo;

There are users Tucao Road:

"It was secretly ordered Che You Assistant business, deducting 10 yuan per month from November 2015, during which no service was provided. If not suddenly checked the bill, so quietly buckle down. & rdquo;

"Mom's cell phone was inexplicably set a car assistant, hit 10086 that someone called and the owner agreed to order, and has been withheld for two months" hellip "& rdquo; 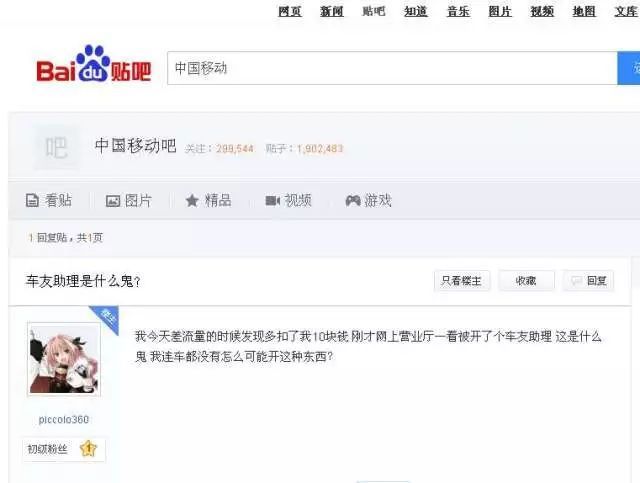 "This service sneaky, I do not know one day on the move, users should actively check their own mobile phone service charges. "Many netizens said that if" voucher "rumbled, users have reason to suspect behind the" lonely ". The cost of ten eight for individuals though not many, if "unknown", together may be a huge figure, which should have a saying.

Analysis of the industry believes that exposure and complaints in recent years, the situation does not rule out the existence of the task of opening up the case, after all, most people will not "this money" too serious.

"Everyone will not always stare at their own words less then less, in the end how few, even if the problem was found, choose to continue protecting the rights and even the few people responsible for, so it is easy for some businesses to produce luck, The idea of ​​playing this & quot; neglected bill & quot; Pan Qiang said that although this amount of deductions is small, but may be involved in a wide range of the overall amount should not be underestimated, will dispel the user's trust in the industry, and even affect the integrity of social construction should be caused by the relevant departments.

More users suggest that the authorities should check the existence of such an event, is suspected of committing crimes, to the public an explanation. Reporters will continue to track the matter.