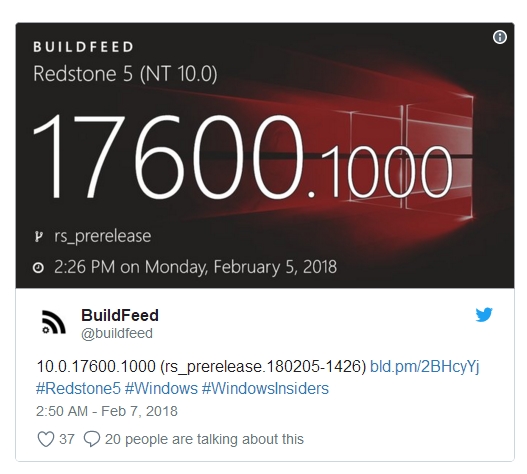 Currently, RS4 is in the Bug Bash (cleanup) phase, and without any surprises, RTM candidates will be signed this month, one step ahead of the turnaround.

About RS5, will be distributed to Insider members after the RTM is signed, especially for the lucky ones on the Skip Ahead Channel.

apart fromMicrosoftThe mouth of "faster than expected"Buildfeed also detected the 17600.1000 version, claiming to be the first compiled version of RS5.

Because the "Sets" function is off-line from RS4, RS5's focus will be on introducing the feature of allowing single-window, multi-program operations in a globally multilabelled manner.

Related news
Hot news this week
||||||||
Celebrating Hubble's 30-year launch of NASA's "birthday universe" special page
TSMC's 5nm process performance is improved by 15% and the performance of AMD Ruilong 5000 processor takes off
HuaweiP40 release: with HMS hard-core google, no price increase to grab the global high-end machine market
Official disclosure of Lenovo's 2020 model Savior: 30% reduction in charger volume
Twitter is a good product, but its shareholders don't have to
Samsung and LG will send 430 employees to Vietnam to support smart device production
A Brief History of Huawei and Xiaomi
Sony Xperia 1Ⅱ detailed specification exposure: sony IMX557 exclusive lead UF3.0
Windows 10 cumulative update kb4541335 release: fix start menu problems (Figure)
The most popular news this week
Tencent launches QQ app for wechat transfer
A field visit to Apple's Daidai factory: 30 thousand people are recruited in five days, and mass production of new iPhone is on the way
Huawei is under the entity list in the whole year: 2020 is the key year to test the supply chain
Direct half price! Microsoft's official turn over of surface
Huawei wins the bid for Mobile's 133000 5g base stations and Nokia is out due to its high quotation
Lenovo confirmed as the first batch of cooperators of Luo Yonghao's live broadcast products, which will mainly promote the online class platform
Liu Haoran's endorsement of vivo S6 released: young people's 5g self filming mobile phone starts from 2698 yuan
From HK $338 for China Mobile's 5g business package in Hong Kong
Xiaomi 2019 revenue first broke 200 billion! Less than 1% hardware margin
Lei Jun sent an open letter to investors: how does Xiaomi deal with the challenges under the "black swan" crisis?