China has given up the "height" of the 8844.43 meter Mount Everest. National Bureau of Surveying and mapping: no matter 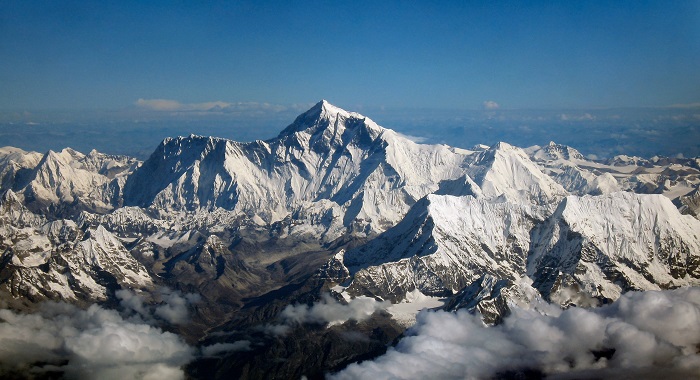 As a statutory body for accurately measuring and authorizing the publication of Everest's elevation in China, the State Bureau of Geographic Information of Surveying and Mapping said that China has never given up its elevation of 8,844.43 meters above sea level.

"This data, authorized by the State Council, according to the" People's Republic of China Surveying and Mapping Law, "the program published as a unified national adoption of Mount Everest rock surface elevation elevation standard data has been used so far." National Mapping Geographic Information Bureau official said.

Everest is the highest peak in the world, located on the border between China and Nepal. Accurate determination of Mount Everest height is a symbol of mankind's exploration and understanding of the law of the earth's movement and is also a symbol of the national scientific and technological level and overall national strength. In 1975, the National Mapping Geographic Information Bureau, together with the military survey and climbers, conducted the first accurate measurement of the altitude of Mount Qomolangma and determined the elevation of Mount Everest to be 8848.13 meters.

In 2005, the peak elevation data of Mount Everest peaked at 3.70 meters compared with the data measured in 1975. In this regard, the State Bureau of Surveying and Mapping, said the relevant person in charge of the main three reasons: First, in 2005 Everest elevation measurement using the global satellite positioning and other advanced mapping techniques, significantly improve the measurement accuracy; the first accurate determination of the peak The thickness of the top ice layer - the peak ice thickness of Mount Everest will change due to climate change, 8844.43 meters is the Everest peak rock surface elevation, excluding the peak ice thickness, that Everest's "net height" ; Thirdly, the change of Everest height caused by the crustal movement in the Everest region from 1975 to 2005.

After the accurate determination of the elevation of the rock surface of Mount Everest in 2005, the State Bureau of Geographic Surveying and Mapping, together with the original Gansu Bureau of Surveying and Mapping and the relevant departments of commerce, was authorized by the State Council and announced at home and abroad in October 2005, originally announced in 1975 Everest elevation data to stop using.

The official said that the State Bureau of Surveying and Mapping Geographic Information Bureau has maintained close monitoring and constant monitoring of Everest elevation changes. Before the State Council or the department authorized by the State Council promulgate new data on the altitude of Mount Everest, all units and individuals should use the 8848.43 meters elevation data of the rocky summit of Mount Everest promulgated according to law.

Related news
Huawei plans to be qualified for Class A Surveying and Mapping and be admitted to Autopilot Map Business
Lei Jun Dong Mingzhu was appraised as China's Outstanding quality person
Measuring the top of the earth: 100 million pixels, 10 meters, helping to measure the height of Everest
Fight for 13 hours: China's 6-man vanguard team has successfully reached the summit of Everest!
Hot news this week
LG double screen mobile phone accessories ads lead to criticism: abnormal old man steals photos of beautiful women
Welcome to zen3! ASUS serial 11, three series AMD b550 motherboard
Microsoft speed! Windows 10 2021 will come next month
Seven manufacturers, such as Xiaomi, oppo and vivo, are too slow to join the mutual transmission alliance? On the spot
Three generations of sharp dragon make new! Amd ryzen 7 3750x / 3850x exposure: 105W super frequency little prince?
Intel updates Wi Fi and Bluetooth drivers for windows 10 systems
48 million main camera 120 Hz screen Redmi the most affordable 5 G mobile phone on the shelf :1799 yuan
LG Electronics will move two TV production lines from South Korea to Indonesia to improve global production efficiency
What does Huang Zheng want to say about the sudden change of letter style from pinduoduo to shareholders in 2020
I'm a Tesla leek for musk
The most popular news this week
Arm cortex-a78 CPU and mali-g78 GPU will drive next year's flagship Android phone
Facebook announces changing the name of digital wallet "Calibra" to "Novi"
With this software, all iPhone devices can be unlocked
Can TSMC Samsung build a production line without us equipment for Huawei?
Where will Intel / AMD go in the future? It's all here
Liu zuohu's official announcement of new products: Overseas launch, low price version plus mobile phone x back?
Arm introduces cortex-x Series CPU for the first time: the performance of IPC born of super large core increases by 30%
Intel's next generation low power CPU appears in the Chinese market: 10nm? 14nm？
Arm released its flagship mali-g78 GPU: 24 cores for the first time in history, with a 25% increase in performance
Pinduoduo's growth formula