20:35, with the "Comedy Goddess" Jia Ling in the Spring Festival Gala announced the start grab the red envelope, follow the instructions before the TV, the global audience have to open the mobile phone Taobao to participate in cross-screen interaction.

As of 23:00 on New Year's Eve, a total of more than 100 million families watched the Spring Festival Gala at the same time involved in the interaction of mobile Taobao,Among them, five provinces in Shandong, Jiangsu, Henan, Guangdong and Hebei are in the top five provinces for grabbing red envelopes. The advantage of large population provinces can be fully demonstrated. 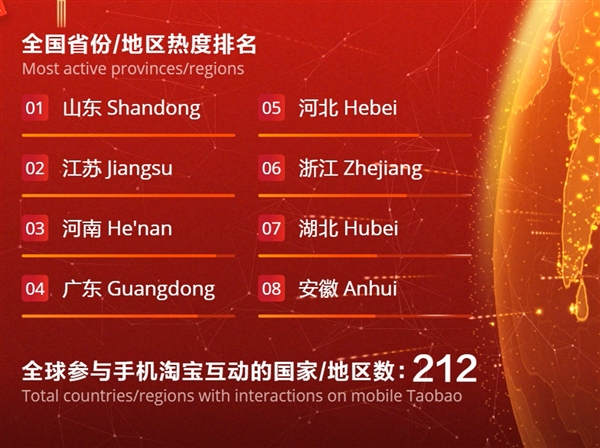 Specific to a separate city, the data show that the elderly users in Shanghai, Hainan Sanya, Liaoning Fushun, Zhoushan in Zhejiang, Beijing, Jiaxing in Zhejiang, Ma'anshan in Anhui, Huzhou in Zhejiang, Yichun in Heilongjiang, Hainan Haikou and other ten cities grab the red envelopes the most enthusiastic, Called "trendy elders" gathering place.

Bustling red envelopes for the mobile phone Taobao usher in a large number of users. Compared with last year, hand Amoy on New Year's Eve day, the number of active users ushered in more than 120% growth.

In addition to red envelopes,Spring Festival Gala by Taobao and CCTV produced a special program - Spring Festival Evening call is also a netizen's official announcement of the sound.

The data show that young users (80 and 90) receiving Starry Spring Festival dinners account for nearly 70% of the total, but apparently this innovative interactive program has also enabled many parents to experience the benefits of technology. Nearly 7% of the receiving users were born before 60, they said: "The original Taobao so interesting," "This Spring Festival Gala, this program is the most Aspect." There are also young users said: Through this innovative interactive program, narrowing their relationship with their parents, so that more family members have a common language.

Analysis of the industry pointed out that through a series of interesting interactive technology play, Taobao is helping to become more and more young Gala Evening, and with the Spring Festival Evening appeal, Taobao has also become a link to the family ties and spiritual ties.