Lenovo is not a "traitor": the 5G standard cast HUAWEI

This was originally a matter that was condemned in 2016. Recently, with a few articles that were known, such as "The 5G standard, Lenovo did not give Huawei a vote," the "shock" title even gave Lenovo buckled the hat of the "national thief" and caused widespread concern in the industry.

Liu Chuanzhi, who has no longer served any position in the Lenovo Group these years, has noticed in his recent articles sent from friends to his articles that these words are directed at associations and are quite malicious. "The sound has grown so loud that Lenovo's reputation has been seriously challenged. It shocked me!" Liu Chuanzhi said in an open letter.

Liu Chuanzhi did not understand the beginning and end of the incident. He then conducted a detailed investigation of Yang Yuanqing and Lenovo's senior executives, including representatives of Lenovo who participated in the 3GPP conference at that time, and announced the findings in an open letter:

The 3rd Generation Partnership Project (3GPP) is the communications standardization organization with the greatest influence in the world. It coordinates the formation of standards for various organizations in the communications field. This is a very specialized academic organization. The conferences are all discussions in the purely technical field. In the first round of the 5G eMBB scheme (RAN1#86bis) voted by the 3GPP organization, Lenovo Group chose the LDPC technology solution based on its own prior technology and patent reserves. In the second round of voting (RAN1#87), we comprehensively considered the country’s overall industrial cooperation, innovation, and development, and resolutely chose Polar code solutions that did not have much technology accumulation before Lenovo. Throughout the entire process, I personally think that Lenovo's voting principle is no problem and there is no problem in implementing it! In order to verify this conclusion, I specifically talked to Huawei's Mr. Ren Zhengfei. Ren always told me that Lenovo had no problems with the 5G standard voting process and thanked Lenovo for its support for Huawei. We all agree that Chinese companies should be united and cannot be provoked by outsiders. 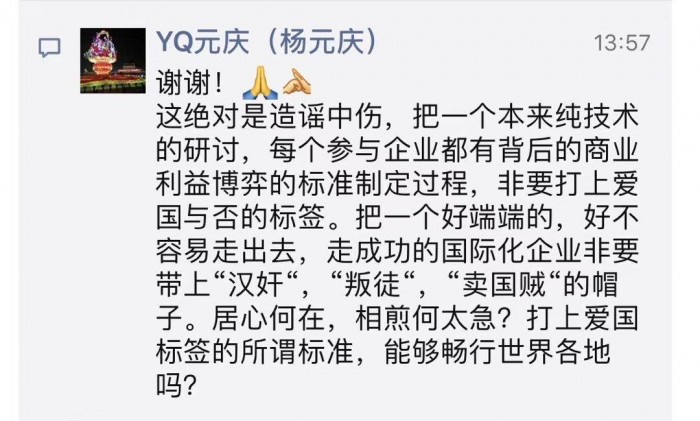 Liu Chuanzhi believes that an incident in the field of technology, which happened two years later, has suddenly been turned upside down. It has also been stigmatized as a traitorous act, and has continued to ferment. Is this accidental? Still being used? All kinds of abnormal phenomena can not help but think deeply.

After more than 30 years of development, China's mobile communications industry has experienced "1G gap, 2G follow-up, 3G breakthrough, and 4G parallel operation." In the 5G era, which is about to be officially commercialized in 2020, China is trying hard to become a leader.

In the 5G era, a consensus reached in the industry is that there is only one universal standard in the world. Therefore, whoever dominates the standard will be able to control the world-wide discourse power in communications. For this reason, chip manufacturers, equipment manufacturers, and operators actively participate in the formulation of the 5G standard, and the competition between countries such as China and the United States in the dominant right of 5G is also increasingly fierce.

On May 11 of this year, it was suddenly known that netizens had pulled out an old account and said that at the 3GPP conference in 2016, Lenovo was a Chinese manufacturer but did not have a Huawei team, but voted for Qualcomm instead. Because of Lenovo's "traitor", Huawei led to a slight loss in the long code.

Subsequently, Lenovo CMO Wang Chuandong issued a statement that Lenovo voted for the 5G standard Polar program (the program is dominated by Huawei, China Mobile and other Chinese companies), including Motorola's Motorola Mobile, voted in favor.

Let's briefly review the general story of the story:

It should be pointed out that there are different companies taking the lead in the three camps. However, from the 3GPP meeting records, Qualcomm, Samsung, Huawei, ZTE, and LG actually participated in the technical assessment of multiple projects at the same time. And discussion. The reason is simple: 5G's right to speak is the core number of patents that have finally been approved. Before the 5G standard was finalized, everyone was basically "multi-betting" on technology and patents.

5G technology, including patents in Polar code and LDPC code, are the result of technological fusion of multiple companies. You have me and I have you. For example, Qualcomm has both partial patents for LDPC and some patents for Polar. Conversely, Huawei has dominated Polar and has also participated in the construction of LDAC.

According to the records of the two meetings, Lenovo supported LDPC at the 86th meeting. This is also the choice of most manufacturers. Only Huawei maintains Polar, and the end result is that LDPC wins over the long-code part of data transmission. The core of the 5G standard will therefore be known to netizens who pass out of Chinese companies and lose to Qualcomm.

At the 87th meeting, in the competition for the short-code part of 5G data transmission, Chinese companies were successful and the Polar program won.

The voting announced by Lenovo Group at the 3GPP 5G channel coding international conference showed that at the 56th meeting, since every proposal had many companies’ objections, all the proposals could not be passed intact.

According to Lenovo, for the consideration of its own technology and patent reserves, Samsung (not Qualcomm, which is not networked) is using LDPC as the only encoding scheme for the eMBB data channel. However, according to Lenovo, although Lenovo and Motorola moved two votes for LDPC, there is no real effect on the Huawei-dominated Polar code loss over long data channel code.

Because 3GPP's working methods are aimed at achieving consensus. A proposal was passed. The only requirement was that there was no opposition from the company, not how many companies agreed.

At the #87 meeting held in Reno, the United States, as previously stated, Lenovo gave Polar code full support. For polar code channels used for data channels, and Polar codes for control channels, both voted in favor.

In other words, Lenovo voted in favor of Polar and once opposed. However, the opposition did not play a decisive role. To say that Lenovo pitted Huawei, it was exaggerated. Only because Lenovo was the only Chinese company in the Qualcomm camp, this slogan was held by the "Little Pink".

Because of this, Huawei has also issued two statements in succession. In the May 11 statement, Huawei stated that at the 3GPP conference in November 2016, Huawei and 55 other companies (including Lenovo and Motorola Mobility) jointly proposed Polar codes as control channels based on extensive performance evaluation and analysis and comparison. Coding mechanism and passed,Lenovo and its Motorola Mobility voted in favor of the plan.

Subsequently, Lenovo forwarded a Huawei China statement and said that Lenovo will cooperate extensively with Huawei and related domestic companies to help the 5G industry thrive! 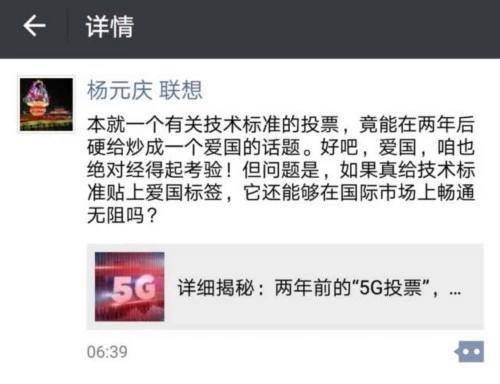 On the morning of May 12th, Yang Yuanqing, Chairman and CEO of Lenovo Group, forwarded the title “Detailed Secret: 5G Voting Two Years ago” in his circle of friends. What did Lenovo actually do? "The article, and the distribution:" This is a vote on the technical standards, it can be hard to speculate on a patriotic topic in two years. Well, patriotic, er, it can definitely withstand the test! But the problem is, If you really affix a patriotic label to a technical standard, can it still be unobstructed in the international market?"

On the evening of May 15, Huawei reiterated its statement:

1, 5G as a new generation of mobile communications technology, the need for joint participation of research institutions and companies in various countries, 3GPP is an international mobile communications standardization organization, there are more than 500 companies and research institutions worldwide, tens of thousands of scientists, experts for several years of struggle, We will make joint efforts for the development of a unified global 5G standard. The 5G standard will continue to evolve. It will take more people and more time to complete.

2. The LDPC code is a coding principle proposed by a professor in the United States in 1962. The Polar code is a coding principle proposed by a Turkish professor in 2008. On this basis, tens of thousands of companies have conducted engineering research for tens of thousands of people. 3GPP selected LDPC codes and Polar codes to be 5G data and control channel coding, respectively, making it part of the 5G standard. Under the leadership of the IMT2020 (5G) Promotion Team, Huawei participated in the 5G standardization research work and made its own contribution. Huawei Corporation thanks Lenovo Group and its partners for their consistent support and is willing to work with Lenovo Group and other partners in the industry chain to continuously promote the healthy development of the 5G industry.

3. As one of the major contributors to 5G research and standards, Huawei is willing to continue to recommend and share more innovative technologies to industry chain partners in the standardization activities, and never extorts any other company or society in an open and equal cooperation. In the joint construction of a healthy 5G ecological environment.

Imagine that if Huawei really ate Lenovo's losses in the 5G standard vote more than a year ago, I am afraid that it will not issue two statements in succession to cleanse Lenovo! Liu Chuanzhi also said that in order to verify this conclusion, Ren Zhengfei, who was the founder of Huawei, specifically made a phone call. Ren Zhengfei told him that Lenovo had no problem in the voting process of the 5G standard, and expressed his gratitude to Lenovo's support for Huawei. .

To sum up, the struggle for coding is more of a technological battle. LDPC is becoming a data code, and Polar has become a control code, all of which have technical advantages. The unification of the global 5G standard requires concerted efforts. It is impossible for any country or any company to “roll over” its opponents and form a “one-size-one”.

At the crucial moment of the formulation of the 5G standard, deliberately turning over more than a year ago and spreading some remarks that are not conducive to the unity of the Chinese camp, people are chilling.

As Xu Yong, a senior reporter of China Post and Telecommunication, saidDon't go out! Although channel coding is an important part of 5G development, the 5G contest has only just begun.