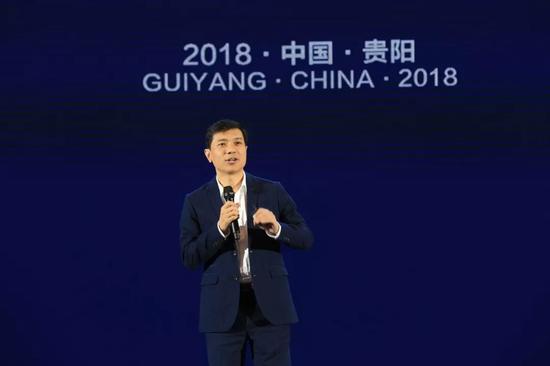 "Baidu lost its ground" after Li Yanhong made public appearances for the first time and participated in the Guizhou Digital Fair.

Not long ago, the Baidu Union Summit was held in Haikou. Robin Li was absent for the first time. In addition, Lu Qi’s resignation of the post of President and others in July, the outside world once considered Baidu’s AI strategy to be put to the test.

Today, Li Yanhong participated in the Guizhou Gathering Fair for the third time and the theme of his speech was still AI. From the speech of Li Yanhong, we have a glimpse of Baidu All in AI's insistence.

Leave no time for the production of Baidu unmanned vehicles

During this year's national "two sessions" period, the reporter asked Li Yanhong the most problem is that Baidu "when the production of no one car" & rdquo;.

Now that it is May, and there is more than one month left, Li Yanhong has expectations, anxiety, and worries. He is not worried that the car can't produce enough lines to produce but it is worried about whether the car is safe enough. "For us, safety is the most important direction of autopilot, and it is our first day." ”

Everything can be wrong, but security can't be wrong. Once wrong, once an incident occurs, it is likely that the entire technology will stall for one to two years. More importantly, human security is the most valuable, so Baidu cannot tolerate mistakes in security.

Li Yanhong put a video of Baidu's unmanned vehicle in Xiong'an. Baidu unmanned car ran out of a dog next to it when it turned and turned. The unmanned car stopped right in front of the puppy and allowed it to pass. Then open again.

The fast driving of unmanned vehicles on highways and closed highways is relatively safe because the road conditions are relatively simple. But there are all sorts of unexpected things on open city roads, and they can't control themselves very well. This is a very common and very difficult problem in autopilot. To solve this problem, the unmanned vehicles can truly become No one can autopilot.

In addition, Robin Li also said that from the opening of the code to mass production, a lot of new code has been added. Nearly 50% of the code is for safety increase. Therefore, a lot of experience is placed on safety and it is necessary to comply with the car. regulation.

AI and no ads.

AI function: APP's accurate understanding of speech, images, and natural language. You can use voice to recall, or you can use the camera to take a picture and it can identify its meaning.

In addition, AI can also be thousands of people, and the results obtained by different people when searching are also different. Simply put, for example, there can be an adult mode (standard mode) or a children mode. It can distinguish whether a voice is an adult's voice or a child's voice, and the corresponding search results are also different.

“Simple search ” is not the only recently launched, it has been developed as early as July 2017 and launched a low-key, after the Baidu Union ecological summit to promote a wave. After experiencing the experience of Xinzhiyuan, it was found that the APP did not join various small advertisements. For example, search "" see "", there is no commercial advertising recommendation.

In addition to the rapid advancement of technology in the era of AI, it is true that with the landing of products, people feel that they need to have new rules, new values, and new ethics besides the AI ​​that brings results to people.

"All AI's new products and new technologies must have a common philosophy and rules." So I thought of four things. ”

1. The highest principle of AI is safety and controllability.

2. The AI's innovative vision is to promote more equal access to technology and capabilities.

3. The existence value of AI is to teach people to learn and make people grow, instead of surpassing humans and replacing people.

4. The ultimate ideal of AI is to bring more freedom and possibility to mankind.

The highest principle of AI is safety and controllability. If an unmanned vehicle is attacked by hackers, it may become a killing weapon. This is absolutely not allowed, so it must be made safe and controllable. This is also the beginning of Li Yanhong's emphasis on the safety of automatic driving is Baidu's first "day".

How can we enable all companies and all people in the new era to acquire equal access to AI's technologies and capabilities, not just the patents of a few big companies, and how can we prevent people from living in the AI ​​era because of technological inequality? All aspects of work have become increasingly unequal. This is an industry that needs to think hard.

"We hope that through the AI, through personalized recommendations, giving people information can teach people how to learn." "" Li Yanhong said that after spending an hour with AI, you discovered that this period of time learned something different from the original, so that AI will make us better people.

the last point. Many people ask, what can people do if they have a lot of work or labor gradually replaced by machines?

People are now working five days off for two days a week, and maybe two days off for five days in the future. But more importantly, it is very likely that because of artificial intelligence, labor no longer becomes a means of people’s livelihood, but it becomes a demand for people.

"You want to work, want to innovate, want to create, so you only go to work. This is the ultimate ideal of AI. We want to bring more freedom and possibility to humanity." ”

What is the mission of AI? It is not a substitute. It is to make technology loyal to human beings, to serve humanity, and to make human life better.

Related news
Baidu responded that the main force of the unmanned bus project has been withdrawn: the news is false
Simple Lottery Spells That Work Overnight 27785149508
Simple Search extension: returning google search results to the 2010s (chart)
Hot news this week
International payment giants deploy digital currency one after another, visa has supported 35 digital currency service providers around the world
Don't change the plane, Lenovo Chen Jin: it's suggested that waiting for the rescuer will bring the most thorough solution of Xiaolong 888
The 27 year old Chinese boy became famous in the first World War! Making the most accurate prediction model of the new crown in the United States
Li Xiang's internal letter: ideal to become the first intelligent electric vehicle in China in five years
158 questions were asked: for the first time, scientists found that dreams can answer math problems correctly
Behind Baidu's market value breaking 100 billion US dollars: from driverless Huangpu Military Academy to car making
Sequoia was attacked by hackers on Friday: personal and financial information may have been stolen by a third party
The United States suffered a large-scale cold wave attack, and China's supercomputing accurately calculated the weather disaster 15 days in advance
Windows 10 continues to improve the settings page to help control panel migrate users to adapt to the new interface
Shen Tengcheng, the first 20 billion box office actor in Chinese film history, has expanded his advantages over Huang Bo and Wu Jing
The most popular news this week
Competing for "first share": fresh e-commerce falls into the curse of listing
Baishi express responded to the collapse of some outlets: the current network operation is normal
Follow up iPhone environmental protection strategy! Meizu officially confirmed: 18 series charger cancelled
Shaanxi found the spring and Autumn Period male beauty facial fat netizen: the life of ancient people is much more exquisite than us
Exposure of Xiaomi 11 Youth Edition: equipped with high brush OLED screen and side fingerprint
Turn over! China's top five box office films are all domestic films: "Tangtan 3" surpasses "Fulian 4"
It will be profitable in 2020! Suning e-buy retail cloud sales soared by more than 100%
Align redmi K40! Exposure of Xiaomi 11 Youth Edition: equipped with high brush OLED screen and side fingerprint
Ren Zhengfei: Huawei has one billion mobile phones on the Internet. The future is the cloud era
LG NEW TV patent approved: between curly TV and transparent TV