Chinese AI scientists were charged with academic fraud, and former Google employees were exposed to violence.

The assistant professor of University of Southern California, director of the visual and graphic laboratory, Li Hao, who was referred to the former employee as an academic falsification, submitted a forged image to the computer graphics conference SIGGRAPH and called the result of automatic computer generation. The employee was also dismissed and beaten after a confrontation with Li Hao. However, Li Hao denied falsification and shooting. What is the truth of the event?

A former Google employee sued his Chinese boss for not only academic fraud, but also artificial tampering with papers received by SIGGRAPH Asia 2017, as well as wilful concealment of technical achievements.

Now, the case is under way, and Li Hao denies all charges.

According to our last name,

Today, academic fraud, original technology and American companies' secrecy policies, as well as the tense atmosphere in the United States against Chinese and Chinese scientists have made the lawsuit more representative.

Now the two sides insist on each other, and new wisdom yuan combs the whole situation on the basis of the indictment submitted to the court and the public information on the Internet.

The Register18 reported that the employee was called Iman Sadeghi, who was submitting a court file to the high court of Losangeles County, USA., his former employer, Pinscreen, submitted fake images and results to the computer graphics conference SIGGRAPH, and was in a confrontation with the company's CEO and referred to its technology. Sadeghi was unlawfully fired and beaten.

Sadeghi accused Li Hao of being an assistant professor at the University of Southern California and director of the university's vision and graphics laboratory. Because you keep one. 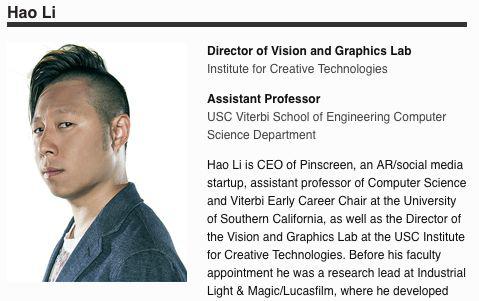 University of Southern California's official website photo does not seem to kill Matt.

However, Li Hao's resume does not kill Matt at all.

According to public information, Li Hao was born in the Federal Republic of Germany in 1981 and his parents are immigrants from Taiwan. He received a master's degree in computer science from carlour University of technology in 2006 and a Ph. D. in computer science from the Federal Institute of technology in Zurich, Switzerland in 2010. In the 2011-2012 year, he was a postdoctoral fellow at Princeton University and Columbia University.

He used to be a famous Hollywood producer, George.

Li Hao was involved in developing the first unmarked performance driven facial animation recognition system when he was read at 2009, and was awarded the best paper award for ACM SIGGRAPH / Eurographics Symposium on Computer Animation in the year. In 2013, it was selected as the 35 scientific and technological innovator in 35 in 2013 by MIT science and Technology Review Magazine, and the Google Institute Research Award in 2015.

Pinscreen was one of the most computer vision companies at first, and until 2016, when Trump ran for the president of the United States, Pinscreen made a series of Trump - based GIF diagrams that were becoming more and more famous.

They have also spoof Hilary.

Along the way, Li Hao can be said to be unique, young and promising, and without accident, it will realize the dream of wealth creation, valuation and listing on a regular basis.

But I didn't expect to meet Sadeghi.

A case of hair caused by a cluster of hair

Sadeghi is also a technical bull.

He was a Ph.D. in UCSD. He won the award for graphic computation during his college years, and later worked in Disney to produce animated characters. In August 2011, Sadeghi joined Google as a software engineer. With its rich software system architecture, extensible distributed systems, deep convolution neural networks, he had a number of patents with Google and Disney, respectively.

In the early October 2016, during the scientific conference in Amsterdam, Holland, Li Hao, co - founder and CEO of Pinscreen, contacted Sadeghi and invited him to join his own company.

On January 22, 2017, before Sadeghi signed the contract to join Pinscreen, Li Hao sent him two examples of allegedly automatically generated virtual images in writing through Facebook messages. Sadeghi specifically asked if the image had been generated automatically, and Li Hao answered clearly

However, according to Sadeghi in court documents of the Los Angeles County High Court in the United States, Lai Hao claimed that the portrait and hair presented were automatically generated.

According to the trial documents, Li Hao forced the data to be falsified, he said.

Another evidence provided by Sadeghi comes from SIGGRAPH.

However, the quality improvement in submission is so important that the meeting reviewers asked Pinscreen for an explanation

The following is from the prosecution document, which is the contribution of Sadeghi technology to the Pinscreen digital animal character hairstyle. 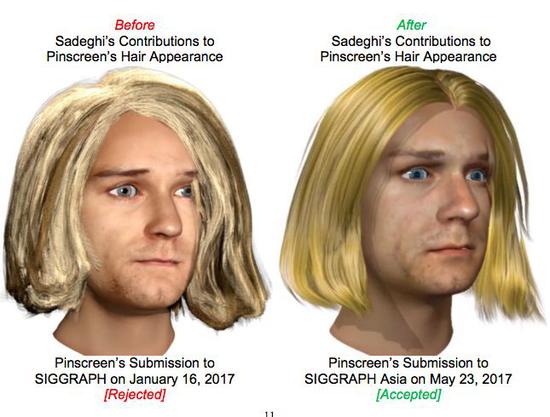 As mentioned in the court documents, in Skype's transcript, Li Hao once said,

Crucially, it is difficult for developers who say Pinscreen in court documents to write effective code to produce the correct eye color for these photo-generated cartoon heads, while the company submitted a paper saying

Pinscreen claims that the input of human snapshots to their convolution neural network can generate realistic cartoon heads.

Li Hao is accused of deception of soft silver, disrespectful of scholars

In addition to accusing Li Hao of technical fraud, Sadeghi was also accused of deceiving investors.

In November 8, 2016 and December 26, 2016, Li Hao wrote that the valuation of Pinscreen was US $30 million. But the subsequent valuation figures are growing fast.

A lawyer for Pinscreen told Sadeghi in a telephone conversation on February 21, 2017, that the company was valued at $57.5 million. Shortly afterwards, on June 17, 2017, Lai Hao said that he was working with Softbank Venture Korea (

In court filings, the company said its hand-drawn avatar was automatically generated by artificial intelligence, and in a screenshot of another conversation between Pinscreen employees, Li Hao allegedly wrote:

Besides being accused of deceiving investors, Li Hao was also accused of being disrespectful to scholars.

After joining Pinscreen, Sadeghi gradually realized that although Li Hao was an assistant professor, he did not respect scholars and participated in data fraud and various academic misconduct.

Li Hao modifies the technical ability of Pinscreen in the submission of scientific research, and then uses the pressure of cut-off date to overwork the staff to make him exaggerate, and if the employee fails, he will order them to forge deliverables.

At the meeting, Sadeghi received a letter of resignation and was asked to return to his laptop. Sadeghi said he had to retrieve some personal data from his notebook before returning it. Then get up and leave Pinscreen's office.

The trial documents said that just as Sadeghi was about to leave,

Sadeghi claimed that his eyes were injured and his shoulder was dislocated.

In an email to Register this week, Mr Lai said,

Li Hao also said that Sadeghi was due to

Is the Sadeghi's accusation a fake??

The dispute between Sadeghi and Li Hao has aroused the attention of all parties. 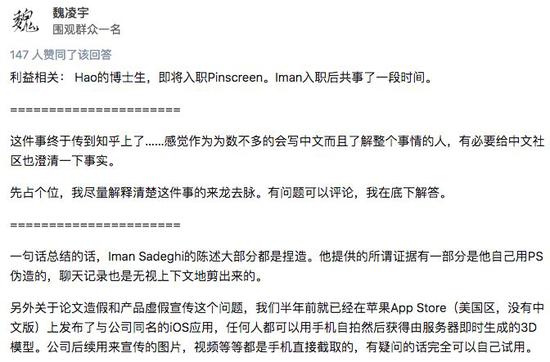 At present, Sadeghi has not yet made a comment.

Related news
The English name of Chinese liquor has been changed: Chinese Baijiu has been officially launched
Tesla's Chinese Rivals See Record Monthly Delivery on Further Recovery from Covid
Hot news this week
China has found 35 known cases of the new zoonotic virus Langya
Losses in a single quarter of $ 23.4 billion a record, SoftBank did not carry the plunge of technology stocks and the devaluation of the yen
The prevention and control of the American Monkey epidemic has failed. What should I pay attention to?
Is the micro -business headache? WeChat friends are suspected to have a big move: 7 can only be posted a week
Kuaishou launched a self-developed cloud intelligent video processing chip: The chip has been streamed successfully
The new product of Xiaomi MIX is coming: both internal and external dual -screen has been upgraded to make up for the previous generation.
A new zoonotic virus, Langya, found in China has not yet been confirmed to be transmitted from person to person
Ministry of Public Security: Single telecommunications network fraud continues to cause 40 % of all electrical fraud cases
Special price "kill ripe"? Bike-sharing platforms have different prices for the same package for different users
A tech company in Shanghai has been fined 220,000 yuan for swiping orders to improve its ranking on Yelp
The most popular news this week
Yuyuki Kobayashi joins NetEase game! He worked on Devil May Cry 4 and Resident Evil 4.
Cyber violence governance needs the concerted efforts of all sectors of society
WeChat releases a new specification for the public account avatar setting, and the official news reminder is prohibited
After the U.S. chip bill takes effect, the manufacturer's snatching subsidy war is even more intense
Thousands of flights in the United States are delayed or canceled: User collapse extreme weather is frequent
Off the shelves one after another! The Sogou search App followed in the footsteps of Sogou Map
Xiaomi MIX flagship top with price reduction: consistent with the price of 12S Ultra
Semiconductor industry burst! Us Orders' Mother of All Chips' banned
Tesla suddenly accelerated out of control into a wall tragic: the owner of the right pedal and drive assistance
Lei Jun was splashed with cold water