The Intel X series desktop fever platform has been increasing very slowly in the previous years. After the AMD thread tearing was born and pushed to the 16 core, Intel took out the 18 core counterattack, but did not expect the AMD second generation to double to the 32 core, and the current architecture of Intel is at most 28 core. 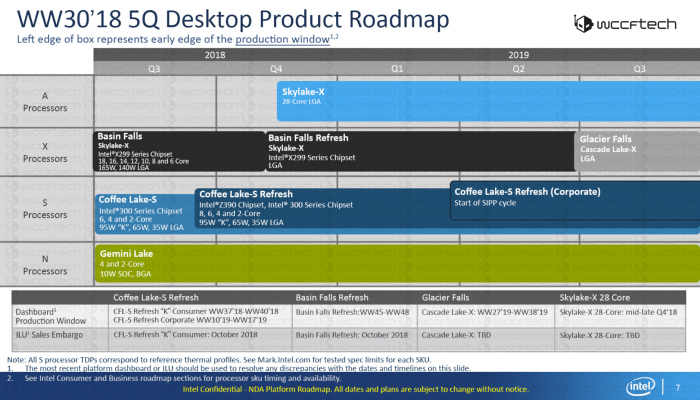 In fact, at the Taipei Computer Show in early June, Intel showed 28 cores, using the compressor full-core overclocking 5GHz, but there is no clear statement whether it will bring to the desktop consumer market.

This new road map showsIntel will open a new A series on the X series, which can be regarded as a super fever platform. The first product code is "Skylake-X", which is the same as the current fever platform, but will have up to 28 cores (56 threads). !

But although the name is the same, this more feverish Skylake-X is no longer the LGA2066 package interface, X299 motherboard, butWill be replaced with XeonserverThe same LGA3467, the motherboard will be new.

In terms of time,Intel 28 core will be put into production in the middle and late fourth quarter of this year, that is, November-December, but the release time is not fixedIt is estimated that it will wait until early next year.

At the same time, the X-Series will continue to be updated and upgraded to the fourth quarter of this year.Basin Falls RefreshJust the speed-up version of the existing product, or up to 18 cores, with the X299 motherboard, is expected to be mainly higher frequency.

In the middle of next year, we will see the next generation of Glacier Falls, among whichprocessorCodenamed Cascade Lake-X, according to the previous news or 14nm process, the number of cores may exceed 18, and the motherboard should continue to be compatible with X299.

In the mainstream market, the Coffee Lake-S Refresh upgrade (may be more than the ninth generationcore) will debut from October, upgrade to 8 core 16 threads (i9-9900K), the motherboard has a new Z390, but is fully compatible with the current Z370.