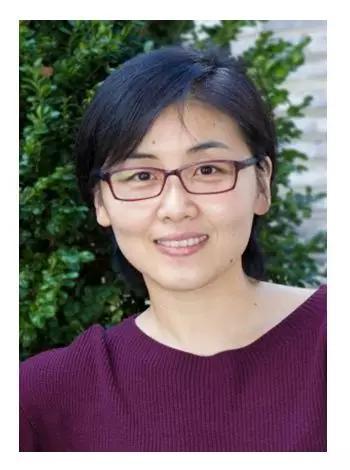 Published online in September 6th:Structure of the human voltage-gated sodium channel Nav1.4 in complex with beta 1

On September 6, Yanning's team officially published the latest paper on voltage-gated sodium channel (Nav). Despite the potential impact of Nav on many human diseases, decades of explorations have failed to decipher any structure of Nav channels from humans, which in large part hampers our understanding of how it works and limits new therapies.Development. 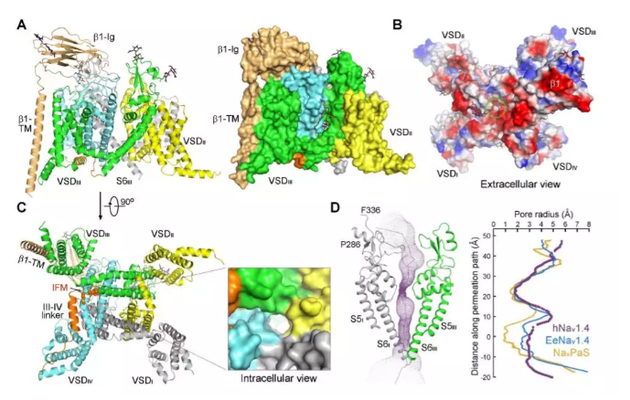 In this study, the researchers reported the structure of the human Nav1.4- β 1 complex, with a resolution of 3. 2%, using freeze electron microscopy. Specifically, the structure provides detailed information about the pore domain, the voltage sensing domain, and the β 1 subunit, giving us an understanding of the molecular basis of the sodium ion permeability of human Nav1.4 channels. It also provides a new insight into the dynamic asymmetry of the four transmembrane repeat regions.

Structural analysis further revealed the mechanism of some pathogenic mutations. It turns out that if the key amino acids are affected, it leads to a kind of allosteric inhibition effect, which quickly inactivates the Nav channel. This elucidation of the human Nav structure not only explains past discoveries, but also paves the way for future research, making it possible to develop new drugs for the Nav channel.

Professor Yan Ning introduced the importance of the study to readers of academic circles and latitudes: "Nav 1.4 is the most comprehensive and biophysical subtype of all sodium channels, but the electrophysiological analysis of the Nav 1.4 channel in eels can not be done in non-endogenous systems, so there is no way to do further research. The structure of human Nav1.4 channels has changed this situation. In the future, scientists will be able to obtain the structure of Nav in different states under the guidance of electrophysiological data, assemble different static pictures into'dynamic movies', and eventually present the complete process of its work.

"Nav Channel, on the other hand, is an important pharmaceutical target, and Nav 1.7 and Nav 1.8 are targets for many companies to develop new analgesics. Many people have long wanted to get antibodies to Nav, but because there is no way to get the purified protein, even antibodies can not be produced. Another implication of our work is that sodium channels can also be expressed in vitro and completely folded. Such a technical difficulty has also been conquered by us. Professor Yan Ning added.

Published online in July 26th:Structural basis for the modulation of voltage-gated sodium channels by animal by

This is also a study of Nav. We know that Nav channels play a key role in generating neural impulse signals, so they are targets for a variety of chemical pesticides and human drugs. At the same time, Nav is also the most common target of neurotoxins. Neurotoxins target sodium channels in two ways: the first, called pore blockers, inhibit the flow of sodium ions by blocking the pores of ion channels. These neurotoxins include tetrodotoxin (TTX) and saxitoxin (STX). The second class of neurotoxins, known as gating modifier toxins (GMTs), immobilize the conformation of ion channels in a state through complex allosteric effects, thereby inhibiting or activating ion channels, including spider toxin Dc1a. However, the specific mechanisms of these two types of neurotoxins have not been clarified.

In this study, published in the July 26 issue of the Journal Science, Yanning's team used cryo-electron microscopy to obtain the complexes of insect Nav channels binding to Dc1a, and the cryo-electron microscopic structures of Nav-Dc1a-TTX and Nav-Dc1a-STX complexes. Their resolutions were 2.8_, 2.6_, and 3.2_, respectively. The complex interactions between Dc1a and sodium channels involve multiple amino acids located in different protein domains. Biochemical experiments have also been confirmed. 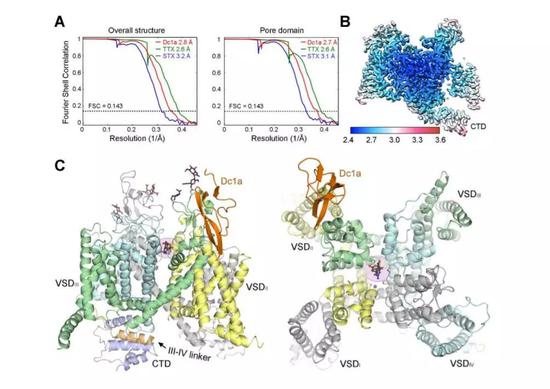 The structure of complex NavPaS and Dc1a (photo source: Science)

This research is also important for drug development. Because GMTs are more selective than pore blockers, their behavior can provide valuable information for the development of drugs targeting specific sodium channel subtypes. The results of this study suggest that the region where GMTs interact with sodium channels is not limited to VSD, so researchers need to be careful about the results of VSD fragments that describe GMTs behavior using only sodium channels.

Published online in June 28th:Structural basis for the recognition of Sonic Hedgehog by human Patched1

Hedgehog (Hh) signaling pathway is a classical pathway in developmental biology. It plays an important role in embryonic development. In adults, if this pathway is overactivated, it may lead to cancer. One of the core proteins in this pathway is the receptor named Patched 1 (Ptch1). When this receptor protein binds to the Hh protein, it releases the inhibition of the downstream protein and opens the signaling pathway. This step is significant for the entire pathway, but the structural basis behind it has not been clarified.

In this study, Yan Ning's team obtained the structure of human Ptch1 protein with a resolution of 3.9. In addition, the Ptch1 and Hh homologous Shh protein N-segment (ShhN) complex was obtained, with a resolution of 3.6. Through these freeze electron microscopic structures, we can see 12 transmembrane domains and two extracellular domains of Ptch1 ECD1 and ECD2.. The two extracellular domains are close to each other when ShhN is close to each other, forming the binding site to ShhN. This recognition mechanism has also been confirmed by biochemical experiments.

The structure of Ptch1 when it is combined alone or with ShhN (source: Science).

In addition, based on these structures, the researchers also revealed steroid dependence when ShhN interacts with Ptch1 through biochemical analysis. In contrast, those mutant Ptch1 proteins that failed to bind steroids exhibited significant conformational rearrangements compared with wild-type ones.

This study reveals the molecular structure of the human Ptch1 protein and the Ptch1 protein-ShhN complex, giving us a more intuitive understanding of the key steps in this important signaling pathway.

"Is it hard to do scientific research? I have always been reluctant to use the word "bitter", and there is no pie in the world in all walks of life. Professor Yan Ning said: "But bitterness is actually a kind of psychological feeling, when really into, more often than not is a kind of involuntary sleep, food, fascination. And until the moment of ecstasy, everything seems to be nothing. Scientific research is a marathon, not a sprint, no one can't do it, only give up and not give up.

We congratulate Professor Yan Ning's research team on the harvest this summer, and we look forward to the progress of structural biology to reveal more mysteries of organisms and bring about potential medical transformation.