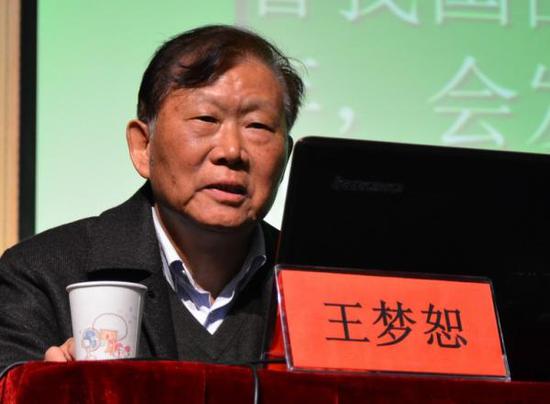 On the afternoon of September 20, Wang Mengshu, a famous Chinese tunnel and underground engineering expert and academician of the Chinese Academy of Engineering, died of illness at the age of 80.

Wang Mengshu, who is known as the “High-speed Railway Academician”, has contributed a lot to the railway. It has opened up theoretical research on the new structure of composite lining of railway tunnels, and has clarified the characteristics and mechanism of structural forces, and determined the construction points and techniques. And participated in the development, research and application of key technical achievements such as deep hole smooth blasting, spray anchor support, monitoring and measurement, feedback information guidance construction and surrounding drilling pre-grouting in Dayaoshan Tunnel, and realized large-section and large-scale Mechanized rapid construction has changed the tunnel design and construction methods in China for nearly 100 years, which has made a major breakthrough in the construction of long tunnels. It presided over the informatization construction of unstable strata in the double-track railway tunnel, and systematically innovated the advanced support system and stable work for the first time. Theoretical analysis and application of the surface, created a new type of mesh steel arch and lock anchor pipe support type and widely used in weak underground engineering; hosted the creation of "shallow buried and deep excavation method"; construction of urban subway and station construction The supporting technology has opened up a new road for the construction of urban subways and underground projects.

Wang Mengshu was elected as an academician of the Chinese Academy of Engineering in 1995. He is a representative of the Ninth, Tenth, Eleventh and Twelfth National People's Congresses, a member of the Ninth and Tenth National Committee of the Chinese People's Political Consultative Conference, and has trained more than 60 doctoral and post-doctoral students.

In March 2017, at the Fifth Session of the 12th National People's Congress, Wang Mengshu, then the deputy chief engineer of China Railway Tunnel Group, submitted two proposals, respectively, on the in-depth implementation of the Daxi Line water transfer project demonstration and implementation as soon as possible. "Proposals for the First Phase of the Project" and "Recommendations for Retaining the Historical Site of the Beijing-Zhangjia Railway to Build a Railway Relics Park".

Young and the railway

On December 24, 1938, Wang Mengshu was born in Anlezhai Village, Zhaoxian Township, Wen County, Henan Province. Wang Mengshu, who was a child, had an indissoluble bond with the railway and followed his parents to take the train as his home.

According to the book, Wang Mengshu’s living conditions in his childhood were poor, but he was diligent and eager to learn, had a strong desire for knowledge, and seized every opportunity to ask his father some questions he did not understand.

In 1949, Wang Mengshu, 11 years old, began studying at Baoji Caijiapo Railway Middle School. It is worth noting that at the time, under the encouragement of his class teacher, Mr. Xu, Wang Mengshu had decided to become a scientist like Zhan Tianyou.

In September 1952, Wang Mengshu officially entered the large-scale building department of the Tianjin Railway Engineering School to study the bridge profession. Under the enlightenment of Teacher Lu Xueyu, Wang Mengshu realized that in order to become an excellent railway construction talent, there must be no shortcuts to study scientific knowledge and professional knowledge. Four years later, Wang Mengshu was admitted to the Bridge and Tunnel Department of Tangshan Railway Institute. In September 1961, Wang Mengshu began to study for tunnel and underground engineering under the name of Professor Gao Quqing, who is known as the founder of the Chinese tunnel discipline.

According to the book, in the school, Wang Mengshu seized the time and minutes, devoted himself to the study and research of tunnels and underground engineering.

After walking out of the ivory tower, Wang Mengshu participated in many major projects: in 1965, he became the first professional technician in China's first underground railway construction. He found that the construction design did not consider the through error and avoided possible operational obstacles. In 1970, he was transferred to The Chengdu Railway Bureau's work on the internal combustion engine section, the design and construction of the successful internal combustion engine section was rated as the country's first excellent diesel engine locomotive section; in 1978, transferred to the Chengdu Railway Bureau to set up a scientific research institute; in 1979, transferred “4501 Engineering” Command work.

During the period of 1980-2000, Wang Mengshu conquered the technical difficulties of the Leigongjian Tunnel, presided over and participated in the development, research and application of key technical achievements of the Dayaoshan Tunnel, realized large-section, large-scale mechanized rapid construction, and hosted the double-track railway tunnel. Informatization construction of unstable formations, for the first time systematically innovated the theoretical analysis and practical application of the support system for the advanced support and stable working face; participated in the reconstruction project of the Fuxingmen turn-back line of the Beijing Metro: “to make the shallow buried excavation method” Implementation; participate in the construction of the Guangzhou Metro, using the "special shallow burying method" to solve the unprecedented six technical problems; in the construction of the Qinling tunnel, research, the use of TBM supporting construction technology and TBM plus drilling and explosion method of diversity Construction technology, the final project was completed ahead of schedule.

In addition to personally directing the construction of the project, Wang Mengshu is also full of talents in teaching and educating people.

He formed the tunnel and underground engineering experimental research center, served as professor and many honorary professors and visiting professors of Beijing Jiaotong University; served as executive director or vice president of several professional technical societies, tunnels and underground works in more than 10 cities. Technical consultant, due diligence.

In addition, Wang Mengshu is best known for his repeated national elections, the South-to-North Water Transfer, the construction of underground water reservoirs, environmental protection, forced installation of tire pressure monitoring devices, Issues such as food safety, rigorous safety assessment and inspection of GM crops, and suggestions or proposals with insights.

Lifelong beliefs:I forget both things, I am not afraid of it.

The author said that due to the working relationship, there are more opportunities to contact Wang Mengshu. “The academician Wang is serious and serious: he participated in the seminar without any reservations about his own point of view. During the on-the-spot investigation, he climbed up and down hard, and made meticulous and sentence-by-sentence suggestions when making suggestions. Wang’s academician in life Like a neighboring parent, I am amiable and diligent, and care about the staff of our school office as much as I care about my children. ”

According to a railway industry expert, Wang Mengshu, as a tunnel expert, made a relatively large contribution to the development of China's railway industry. In addition, after the 723 accident, he believed that the accident itself was a dispatch management accident, which had nothing to do with technology. It was very savvy to attribute the conclusion to technology. ”

It is worth noting that when talking about Wang Mengshu, media reporters also have a good impression on him. A number of reporters interviewed Wang Mengshu, a reporter recalled that he remembered that when he first opened the phone call of Academician Wang Mengshu, he was very polite and enthusiastic, and he had a question and answer, and professional things came to him, "and this is for him." The words should be the strange phone that I saw for the first time, but after I picked it up, I reported it to me very seriously. This made me very moved. ”

Another reporter who repeatedly interviewed Academician Wang Mengshu said that the first impression was to tell the truth, and did not shy away from the problems existing in the railway reform. Second, it was clear about the data; the third was that it was very busy, interviewing him. When he travels frequently or on engineering projects; the fourth is very patient, meticulously answering questions from reporters, and also professionally expressing professional issues.