Station B will receive more than 300 million US dollars of investment from Tencent, which will increase by nearly 8% to a new high of more than three months. 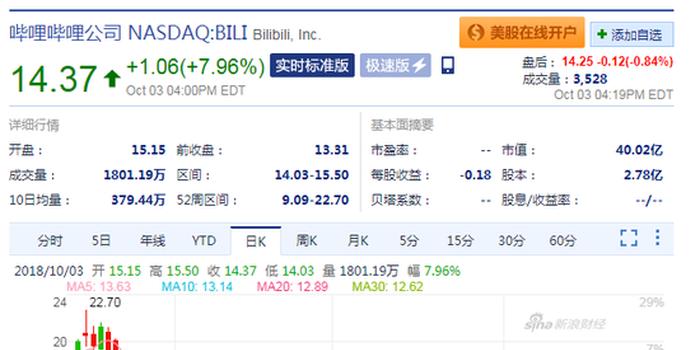 After the news that B (station) will receive Tencent’s investment of more than 300 million U.S. dollars, the stock price of B shares has skyrocketed.

On Wednesday, October 3, before the US stock market, the B station rose nearly 15%, and the day opened higher by more than 15%. It rose to 15.5 US dollars at the beginning of the day, and the intraday increase expanded to more than 16%. Since then, the increase has narrowed significantly, and finally closed up 7.96. %, less than half of the biggest increase in the day, despite this, still hit a new high of more than three months.

Prior to this, on the evening of the 13th Beijing time, 哔哩哔哩 (NASDAQ: BILI) and Tencent Holdings (00700.HK) jointly announced that the two parties have reached an agreement, Tencent Holdings (hereinafter referred to as “Tencent”) will lead the country. The Young People's Cultural Community (hereinafter referred to as “B Station”) invested a total of US$317.6 million in cash to purchase 25.1 million new Z-type common shares of B Station at a price of US$12.67 per share.

According to the statement, according to the agreement, Tencent will subscribe for a total of 250,634,51 shares of newly issued common stock (Z-level common stock) at the price of US$12.67 per share, valued at approximately US$317.6 million. The price is equivalent to $12.67 per ADS for Station B. The transaction is expected to be completed in the near future. After the transaction is completed, Tencent’s shareholding in the B station will increase to approximately 12%. Previous data showed that Tencent accounted for approximately 5.2% of the shares of B shares.

According to Zacks Investment Research, the expected price-to-earnings ratio of station B is 47.45 times, and the price-to-book ratio and market-to-sales ratio are 2.72 times and 7.32 times, respectively, which are also not cheap. However, among the three analysts who covered the B-station, the two gave a strong buy rating, and one gave a buy rating. The rating score increased by 22% in the past 90 days, which means the seller's confidence has been good.

On August 28 this year, Station B announced its second-quarter earnings report. The operating income for the quarter was higher than the company's performance guidance limit, an increase of 76%. On the same day, the B-share price has risen by 19%. But the next day, JP Morgan Chase analyst Binbin Ding lowered the target price of station B from $16 to $14, and the rating is still overweight. According to the analysis, this shows that JP Morgan Chase has confidence in the development prospects of Station B. The downward adjustment of the target price may be related to the recent overvaluation.

According to the financial report, the total operating income of the B station in the second quarter was 1.0265 billion yuan, which was higher than the performance guidance range of 970 million to 1 billion yuan; the monthly live users were 85 million, and the mobile MAU reached 71.4 million, up 30% and 39% year on year. Under the speed, next year is expected to achieve a monthly break of 100 million.

However, in the second quarter, the B station did not reach the market's hopes of turning a profit, and continued to “burn money”. The net loss for the quarter was 70.3 million yuan, a year-on-year increase of 40%. The operating cost of the quarter increased by 88% year-on-year, exceeding the year-on-year growth rate of revenue and gross profit, which in turn swallowed profits.

Too much reliance on the game business has always been a point of criticism for the B station. The macro risks of the suspension of game version number and filing approval have caused Tencent's market value to shrink by a trillion in half a year, and the market is worried about the income prospects of large game companies such as Tencent and Netease. In the second quarter, the proportion of mobile games in the B-station accounted for the second consecutive quarter of declines, from 79.38% in the first quarter to 76.92%.

Also worth mentioning is the regulatory risks directly facing the third quarter. In July of this year, the B station was interviewed by the relevant departments, and then announced the announcement of a month of content rectification. The negative impact of APP removal will appear in the third quarter.