The secret war of AI talent reserve, how will China win?

The McKinsey Global Institute believes that artificial intelligence is profoundly changing the development of human society. Compared with the industrial revolution, this change is “10 times faster, 300 times larger, and almost 3,000 times more influential. & rdquo; Artificial intelligence has become the next "singularity" of global technology development.

At the same time as the rapid development of artificial intelligence, the problem of insufficient AI talent pool and slow training has also emerged. The world's major technology companies have begun to compete in the AI ​​Highlands, and the robbing of AI talents is almost in the heat.

Previously, the first Global AI Talent Report released by LinkedIn showed that the number of AI positions published through the LinkedIn platform increased from 50,000 to 440,000 in 2014-2016, an increase of nearly 8 times. The report also shows that as of the first quarter of 2017, the number of technical talents in the global AI field based on the LinkedIn platform exceeded 1.9 million, of which the total number of relevant talents in the United States exceeded 850,000, ranking first, while the total number of relevant talents in China was just over 50,000.

However, the situation is quietly changing. Since 2017, China's artificial intelligence has developed and pressed the accelerator. The relatively relaxed development environment, active policy support, and the rapid rise of Chinese technology companies in the AI ​​era have made China more attractive to global AI talents. Only Baidu recruited 12 top AI talents to join Baidu Research this year. hospital.

Chinese AI that is about to overtake the corner

With the help of multiple forces, the development of China's AI is in full swing, and Chinese and Chinese companies are welcoming the best time to overtake in the artificial intelligence field.

From the perspective of the industrial environment, China has a large number of application scenarios and audiences compared to the United States. This means that the huge amount of data in the Chinese market can enable AI to be better trained to quickly iterate products and promote the development of AI deep learning.

In terms of academic and industrial research, China's papers and patents in the AI ​​field have entered the first echelon. According to the latest data, China ranks first in the world in terms of AI academic publications and high-cited papers, and China has become the country with the highest number of patent applications in the AI ​​field. 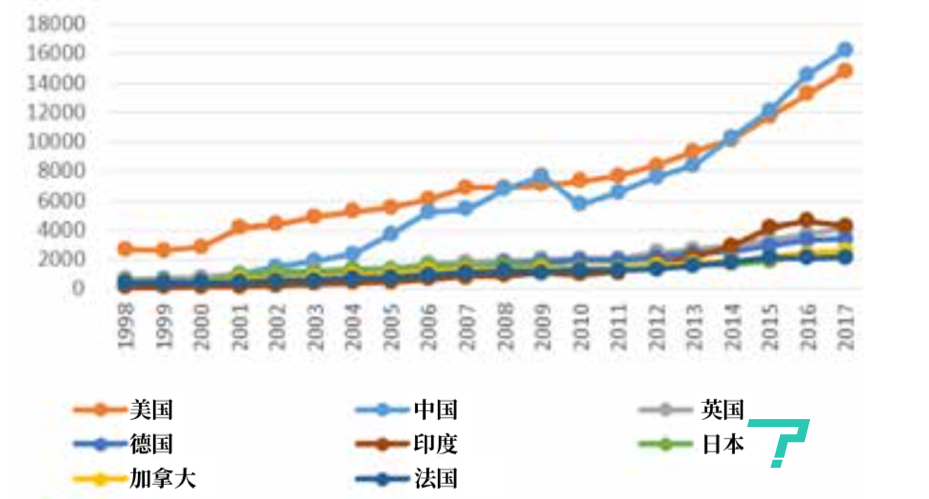 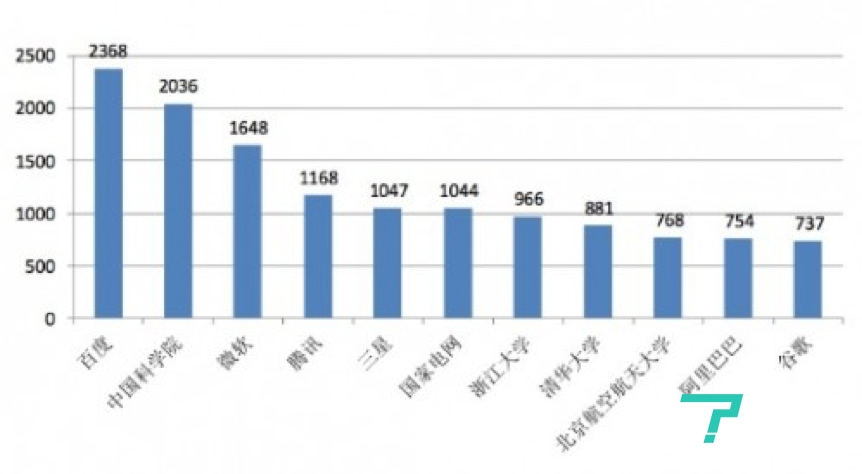 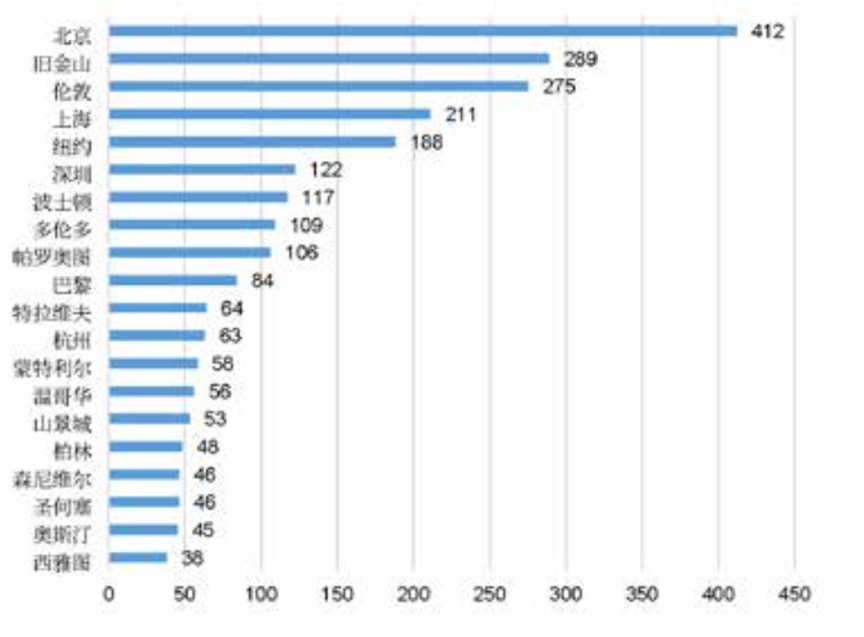 In 2017, the scale of China's artificial intelligence market reached 23.74 billion yuan, a 67% increase over 2016. Last year, the total scale of global artificial intelligence investment and financing reached US$39.5 billion, and China's investment and financing reached US$27.7 billion, accounting for 70%, making it the world's largest capital in AI. 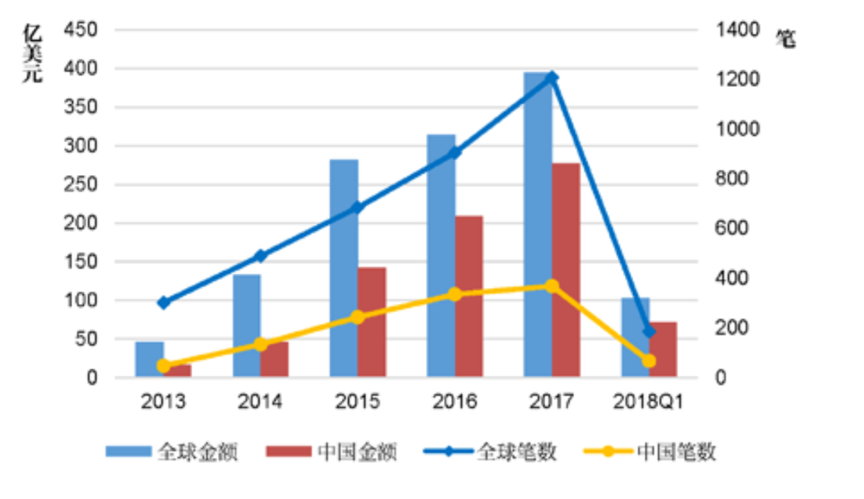 If the Chinese AI market is an experimental field that attracts global AI talents to China, China's technology giants are the battlefields that AI talents prefer.

BATThey are more favored by AI

It is reported that there are about 15,000 engineers in Baidu (the number of engineers specializing in AI technology research and development), and Baidu Research Institute has more than 2,000 AI R&D engineers worldwide.

Ken Ward Church, a master of natural language processing, Urbana ·, University of Illinois; a professor of life at Champaign, David Forsyth, a top scientist in computer vision, a tenured professor at Carnegie Mellon University, Martial Hebert, a specialist in robotics, computer vision and biology Guo Guodong, a specialist in the field of characteristics, and Huang Liang, an expert in the field of machine translation, are all talents in the AI ​​field, and they are also important members of Baidu Research Institute.

AI talents prefer the big platform because of the “platform” effect of the big platform. What is more powerful is not a koi, but a living water mechanism that continuously cultivates new koi.

On the one hand, Google, Facebook, Baidu and other technology companies have trained a large number of top talents, and they are constantly exporting.

In BAT, Baidu has always been a technology-driven company. Baidu advocates the culture of engineers internally, that is, pragmatic, self-driven, and responsible. On this basis, Baidu has derived four strategic solutions for attracting and cultivating AI talents.

First, training + practice systematically cultivate internal talents; second, maintain the purity of technology research and development, and value long-term layout; third, focus on the combination of production, education and research to achieve the joint development of enterprises and schools; fourth, participate in the formulation of industry AI talent training standards.

Under this culture, Baidu has established a good talent ladder. It is understood that the latest promotion of senior talents in Baidu's technology system is almost all employees who have worked in Baidu for about ten years. The flow of talent is an inevitable phenomenon, and the establishment of a culture and mechanism for talent cultivation is not a one-off event.

Have a long way to go

In the initial stage of the AI, our strength can not be underestimated, but there is still a long way to go in terms of talent reserve. More than 65% of senior AI practitioners have been in the world for more than 10 years, and the US currently accounts for more than 70%. China is facing the problem of serious shortage of senior AI talents. It is already urgent to step up the AI ​​talent pool.

The value of AI lies in the future of all-round changes in the times, not in a certain industry. In the face of future challenges, the state and enterprises should attract and cultivate talents with an open and innovative attitude. Excavating the strength of the Chinese market in the future space of AI to attract and cultivate AI talents, Chinese companies represented by Baidu have already taken the first road of practice.

In the field of AI, China has experienced quantitative changes, and the qualitative changes brought about by the construction of the talent echelon. In the situation that the state and enterprises are preparing for the battle, the future can be expected.

Related news
Baidu lifeline AI
Hot news this week
Challenge the fierce rival Intel amd Su Zifeng: This is just the beginning!
Musk is going to blow up the rocket tomorrow
Huawei mate XS Ministry of industry and information technology access: equipped with Kirin 990 5g, better hinge / screen
Can't OEM 16nm chips for Huawei? TSMC: hard to estimate but ready for changes in export control at any time
Samsung Galaxy a71 5g exposure: equipped with exynos 980, square four shot
Magic mobile phone protection shell, match 20 Pro for sale, match 30 Pro for second change
NetEase cloud music and station B could be the only two accidents
Unsealed Taobao account in 980: no malicious refund
TSMC denies being pressured by the us to set up factories in the US: there is no final decision at this stage
Samsung Galaxy a71 5g exposure: cheap "note10" with exynos 980 and square four shot
The most popular news this week
NetEase cloud music and station B could be the only two accidents
Microsoft CEO: technology companies should protect data privacy just like human rights
CAAC: no refund fee for air tickets from 0:00 on January 24
President of Xiaomi International: Xiaomi still wants to enter the US market dominated by apple and Samsung
Over 80 million yuan of contract has been awarded to golde infrared for the application of self-developed chips in the prevention and control of pneumonia
Huawei Developers Conference Announces Extension: Change to Live Online as a New Pneumonia Epidemic
Microsoft chromium edge stable edition ushers in the "new tab" after function improvement
Huawei P40 Pro toughened film spy exposure: the effect of increasing screen curvature is worth looking forward to
DxOMark announces iPhone 11 score: 109 points, just equal to Huawei P20 pro of the year before
Google and Mozilla are sending cake to Microsoft's new edge team