Tencent Technology News, according to foreign technology media reports, in the Indian capital of New Delhi, hundreds of thousands of people take a quiet subway every day to go to work in the overcrowded suburbs. As the train arrived at the station, many people rushed to find a seat, and the quiet atmosphere was interrupted every few minutes. After a few seconds, everyone turned their attention to the smartphone screen and continued to play the comedy pieces they watched on YouTube.

More than 10,000 kilometers away, executives of American video giant Netflix are scrambling to find new strategies to attract these audiences. Earlier this year, CEO Reed Hastings repeatedly saw user sleep time as his biggest competitor, and he also wanted to know if 100 million Netflix users are in India. .

These users may be in India, but YouTube has taken over these users instead of sleeping time.

Although Netflix and Amazon have invested billions of dollars in creating original content, they are still struggling to make progress in emerging markets. On the other hand, YouTube is growing rapidly and even becoming a serious application for new Internet users.

In India, for example, YouTube has 245 million active users per month, accounting for 85% of all Internet users in India. The company tells the media that in India, about 60% of YouTube traffic comes from outside the six major cities in India.

Google revealed in an event this week that in Indonesia, YouTube has about 74 million active users per month, an increase of more than 50% over the same period last year. In Thailand, YouTube covers 92% of rural users and 93% of urban users.

“I think one of the main reasons why YouTube is so successful in emerging markets is that it is more smartphone-centric. Short format videos are suitable for mobile viewing, not long formats. It’s not particularly comfortable to watch a 2-hour movie on your phone,” said Michael Goodman, director of television and media strategy at Strategy Analytics, a technology market research firm.

As YouTube content consumption grows, video creators are also looking for loyal viewers. In India alone, YouTube now has more than 600 subscribers on more than 600 channels, up from 20 channels in 2016.

In order to grow rapidly and expand its business, Google has signed agreements with an unknown number of Internet access service providers worldwide to differentiate YouTube traffic. For example, several telecom operators and broadband providers did not factor users' YouTube spending into their monthly data plans. In a way, YouTube also benefits from pre-installing into most Android phones.

However, YouTube's success is not limited to developing country markets, it has 1.9 billion login users per month. According to market research firm eMarketer's estimate of 2018, 96.1% of all users watching any video streaming service in the US use YouTube, and 73.8% use Netflix: 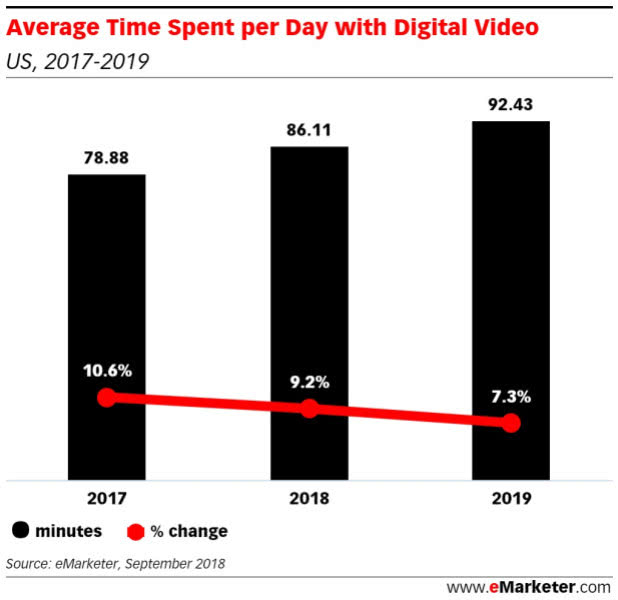 YouTube told the media that 75% of the platform's viewing time on the world is happening on mobile devices. The average viewing time for mobile users is 60 minutes per day. In other words, this is the time a user can spend watching Netflix in a day.

According to eMarketer's estimates, this year, an average user spends about 86 minutes watching streaming video on a streaming service (Netflix does not announce personal viewing time).

Some analysts interviewed said that some of YouTube's recent initiatives may further boost its user base and consumption. Last month, YouTube began adding full Hollywood movies to the site. A few days later, the company announced that it would provide original content to non-paying users.

Perhaps the biggest advantage of YouTube compared to Netflix is ​​the breadth of its video content and the fact that users can get content for free. Whether it's a speech at the Oxford Union, a government press conference from C-Span, or a daily American talk show, the platform meets a variety of viewing needs.

Goodman, an analyst with Strategy Analytics, added that while YouTube has invested heavily in producing original and licensed movies, it only accounts for a small portion of its total content. He said: "Compared to other consumption on YouTube, the amount of original content and movies is just a drop in the ocean. In other words, Netflix and Amazon and 100 other online video media services are not competing with an entity on YouTube, but with millions of video content creators.

Although Netflix does not view YouTube as a threat, it is clear that the company recognizes the existence and influence of YouTube every day. If you visit the YouTube site frequently, you've probably already seen the Netflix ad there.