Is it a good time for many e-commerce companies to "sell" the iPhone on the same day?

According to screenshots released below Suning, "Friendship Business" is exactly what it is.JD.COM。 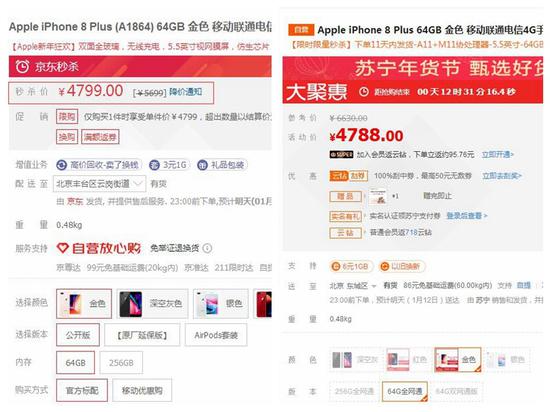 It's worth noting that although the price reduction is from Apple, the 4799 yuan of the iPhone 8P is on the second kill page in Beijing and the page display is a time-limited second kill. The page also shows that the price of only one unit is 4799 yuan.

Sino-Singapore Longitudinal and Weft Client Query found that the price of Suning Easy-to-buy iPhone 8P is 11 yuan cheaper than that of Jingdong, and now offers 4788 yuan, which is also a time-limited snap-up. Users only buy one.

The price of the XR 128GB Suning is 1200 yuan cheaper than the 6999 yuan on Apple's official website. A loyal Apple fan, Mr. Liang, told Sino-Singapore Jingwei Client that in the past, Apple's new mobile phone had been greatly reduced by about 800 yuan on the business platform, and it had to be grabbed.

In addition, Tianmao subsidized popular models such as the iPhone XS and the iPhone XS MAX during the New Year's Festival, with the new iPhone dropping by up to 1500 yuan.

Now is a good time to start?

On the 10th, it was reported that channel providers in Huaqiangbei, Shenzhen, China had received price adjustment information from the United States. Products such as the iPhone 8 series, the iPhone X, the iPhone XS series and the iPhone XR began to reduce prices.

But then a store in Huaqiang North denied that the price of the iPhone had been lowered, saying that Apple's official website had not said that, even if it had, it would not have been possible to reduce that much. There are media to verify the customer service, customer service response said that at present, whether wholesale or retail, Apple has not officially lowered prices, nor received notification.

Rumors of price cuts are a sign of weak demand for the new iPhone, and news about the XR hackling of the iPhone is constantly emerging in the market, despite the fact that Apple (China) has been "not commenting" on external calibre.

In this regard, many netizens said that the current price is still worth starting with, "price reduction, it seems that I am ready to buy", "until the spring, it is time for action".

Of course, some netizens questioned, "How much profit is this?"

Earlier this month, in a letter to Apple investors, CEO Tim Cook downgraded the company's earnings forecast for the first quarter of 2019, the fourth quarter of natural year 2018, to $84 billion from the previous forecast of $89 billion to $93 billion, and the gross interest rate to about 38% from 38% to 38.5%. This is the first time since 2002 that quarterly revenue expectations have been lowered before the earnings report is due to be published.

"The impact is also beginning to be felt by consumers, with fewer and fewer people going to our retail stores and distributors in China." Cook complained in the letter.

Why can't the iPhone sell in China? In fact, China's smartphone market is not Apple, Samsung's world.

In his latest report, Goldman Sachs analyst Rodhar pointed out that Apple seems to have made a serious mistake in the pricing strategy of the iPhone XR, causing sales to fall short of expectations. "Apart from weak demand in emerging markets such as China, the lower cost-effective ratio of the iPhone XR does not seem to be popular with users outside the United States."

According to a recent report issued by China Information and Communication Research Institute, the shipment of smartphones in China was 390 million in 2018, down 15.5% year-on-year, of which Android accounted for 89.3% of smartphones.

Sun Yanbiao, president of the First Mobile Phone Industry Research Institute, pointed out that at present domestic mobile phone manufacturers have occupied 90% of the market share. Next year's market will continue this year's competitive situation, and the homogeneity of mobile phone products is still serious. Perhaps the biggest variable in the market is Apple, whose share has continued to decline due to various factors.

Major General Ding, an industry observer, said: "In 2018, China's mobile phone market has changed from Apple and Samsung to domestic mobile phone brands. The loss of shares of Apple and Samsung is related not only to the rise of national brands in the high-end market, but also to the slowing down of technological innovation and conservative product strategies. The domestic mobile phone market will still be in 2019HUAWEIOPPO, vivo and millet dominate, while Apple and Samsung are challenged. With the establishment of China in the latest structural adjustment of millet, the competition among brands for the top position in the domestic market will become more intense.

A few days ago, a Reuters Chinese website article analyzed why Chinese users were reluctant to buy a new iPhone. The article mentions three reasons. Firstly, the price of the iPhone is expensive, and consumers will choose products with high price ratio, such as millet and Huawei. Second, more and more Apple users are seeking to upgrade their old iPhones rather than buy new ones. Third, the normal and sustained slowdown of the global economy has led to a decline in consumer spending power.

(China-Singapore longitude and weft client, Jan. 11) Jingdong, Tianmao and Suning Easy-to-buy cut the price of the iPhone sharply on Jan. 11.