Foreign Media: Landing on the Back of the Moon Shows the Ambition of China's Space Powers 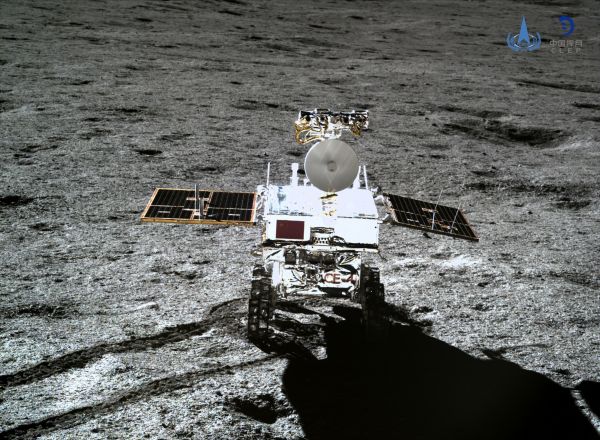 This is the image of Jade Rabbit II patrol by Chang'e 4 lander topographic camera. NASA Map

Washington Post, USAwebsiteAccording to an article published on January 10, China's goal is to become the world's leading aerospace power by 2045, and its vision is quite different from the pressing causes of competition between the United States and the Soviet Union during the cold war. The most important thing was to put the flag on the moon and then turn to other gimmicks that were worth showing off.

On the contrary, China focuses on developing permanent space forces. Recently, by landing on the back of the moon, China is a resource.DevelopmentAn important stronghold has been established. It will take two to three years for the United States to complete its first robotic mission to the moon. The relative advantage in space resources may determine who will be the dominant force in the future.

In the future, who will be able to access abundant space resources, such as water or ice, iron, titanium, platinum and nickel; who will ensure trade routes; who will set rules for space commerce, such as trading in energy propellants and precious metals; and who will benefit from military power derived from industrial power? Most people think about space exploration; in fact, it's space development that affects future strength.

According to the article, China's space strategy involves the establishment of lunar industrial infrastructure to enter outer space in a cost-effective manner. Chang'e IV is the first step: proving the ability to communicate, land, investigate and monitor the location of future industrial and logistics bases. The mission ensured China's entry into the resource-rich South Pole of the Moon, and took the lead in establishing the ability to exploit space resources and industrialize the Moon so as to build solar satellites and exploit the rich mineral deposits of the Moon and asteroids.

It is estimated that the lunar poles contain hundreds of millions of tons of water resources, enough to fuel numerous space missions to the farthest reaches of the solar system; enough to explore and develop the resources of the asteroid belt; enough to expand logistics to achieve large-scale industrialization; enough to develop military logistics in near-Earth space.

The competition to be watched is not China's manned lunar landing, but the competition between China's robotic probes and NASA's Commercial Lunar Launch Service Program, which will determine the comparative advantages of the two countries in the acquisition and development of lunar resources, the article said.

China has a highly coordinated and disciplined system that can set and maintain long-term goals, with a large population and abundant talent, so it has the advantage to win the space race, the article said.

Influences on the world

According to the article, Chang'e-4 is a symbol of the development and strength of China's space program and is of great significance to China's relations with world powers. Its impact has been transmitted to the United States, and the Trump Administration is considering the space race and the prospects for space exploration.

Historically, one of the main drivers of U.S. space policy has been competition with Russia, especially in the context of the cold war, the article said. If China continues to succeed, will the United States find itself in a new space race?

In addition to manned space flight, the Chinese have also carried out space research activities such as Chang'e IV, the article said. Its first lunar probe, Chang'e-1, entered lunar orbit in 2007 and China's lunar rover landed on the moon in 2013. China's future plans include the establishment of a new space station, a lunar base and a possible Mars sampling and return mission.

China has also proved remarkable skills in military applications, the article said. In 2007, China conducted an anti-satellite test, launching a land-based missile to destroy a failed meteorological satellite. The U.S. Department of Defense pointed out in its report on China's military capabilities in 2018 that China's military space program was "rapidly maturing".

The article holds that although China has relevant capabilities, the United States has not carried out any substantive cooperation with China for national security reasons. In fact, a 2011 U.S. law prohibits official contact with Chinese space officials. Does this herald a new space race between the United States and China?