Dismantling the Records of Gree's Shareholders'Meeting: Stripping the Line to Complete the "Initial Dream" Gree is still "Dong Mingzhu Age" 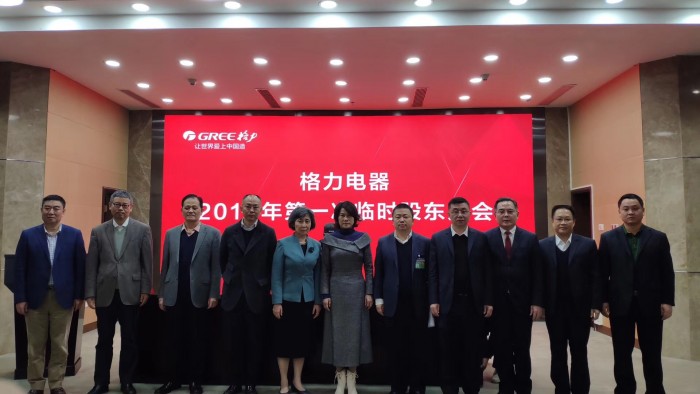 Dong Mingzhu disclosed at the shareholders'meeting that in 2018, Gree finished its annual revenue target of 200 billion yuan, an increase of more than 35% over the previous year.

"200 billion revenue" is a five-year revenue target put forward by Dong Mingzhu when she was first elected chairman of Gree Electric Appliances in May 2012. After five years, Dong Mingzhu finally completed her "original dream" by the end of 2018.

Previously, the outside world believed that Dong Mingzhu's re-election was full of uncertainty.

In the past year, Gree's share price has fallen from its peak of 58.7 yuan to around 40 yuan, and its market value has shrunk by one third. Dong Mingzhu once "reprimanded" small and medium shareholders "Gree has not treated you badly", but the indefinite dividend policy of Gree has been criticized.

In addition, Dong Mingzhu personally encountered the biggest "black swan" in her career: her personal investment in Zhuhai Yinlong New Energy Co., Ltd. revealed that Wei Yincang, the former chairman, and Sun Guohua, the former president, were suspected of embezzling more than 1 billion yuan of the company's interests.

However, from the current results, the board of directors is still very positive about Dong Mingzhu. Gree's "Dong Mingzhu era" will continue for three years, and there is no clear sign of its end.

Gree has no clear candidate to take over Dong Mingzhu, 65. Asked by shareholders when to retire and whether there is a successor, Dong Mingzhu responded, "My mind is that I want to retire now." She said that she had an assessment of her successor, but it was not her decision, but whether she was responsible for the performance of the company.

Following are the key points of Sohu Technology's Gree Shareholders'Meeting.

Achievement - The growth rate in 2018 is not as fast as the revenue target of 600 billion in the past five years.

There was an interesting "episode" at the shareholders'meeting that day. Dong Mingzhu disclosed that in 2018, revenue was 200 billion yuan and profit was 26 billion yuan. The $200 billion revenue figure "stepped on the wire" at the last minute to achieve the five-year revenue target put forward by Dong Mingzhu when he was first elected chairman of Gree Electric Appliances in May 2012. As the company's performance announcement has not yet been issued, Dong Mingzhu's action is suspected of violating the rules.

Dong Mingzhu explained, "First, I'm getting bigger and my profit margin is declining. I think it's normal because my overall profit this year is billions more than last year. Second, I'm doing chip research and adding a lot of research and development equipment. This is to be invested."

The growth rate in 2018 is not as fast as expected, which makes people doubt the future growth of Gree. Dong Mingzhu once said in mid-2018 that "revenue will reach 600 billion yuan in 2023". At the current shareholders'meeting, Dong Mingzhu admitted that this figure is actually the goal set by Zhuhai Municipal Government for Gree, but in Dong Mingzhu's view, "Gree is sure to maintain a growth rate of more than 10%, but it is far from enough to achieve this goal."

Strategies: Air-conditioning bosses will not change the status of mobile phones, Yinlong, chips still need to be done

She said, "Air conditioning is always the main business of Gree, which can not be put down, because we have a large number of R&D personnel to support technical upgrading, we have several more predictable and advanced technology, I believe that in the next 10 years, the position of the head of air conditioning will not change." And directly open up competitors, criticizing Mei's "one-night electricity" is deceiving, mocking Oaks "every day to dig people.

Dong Mingzhu has shown a firm attitude towards the three most controversial "diversified" layouts of mobile phones, cars and chips.

In 2018, the fourth generation of Gree mobile phones did not arrive as promised, and many people in the market think that "Gree mobile phones" are no longer available. However, Dong Mingzhu still does not believe that the "mobile phone" business has failed, in her view, "My performance is growing, I am successful." Dong Mingzhu stressed that Gree mobile phone will not learn millet to make low-cost strategy, 3200 yuan per cent can not be less, and urged all shareholders attending the scene, "You get my dividend, you should take out to buy mobile phones."

On the Yinlong issue, Dong Mingzhu changed her caliber from "car-making" which had been optimistic about Yinlong battery technology to "opening up the automobile air-conditioning market". Dong Mingzhu is honest, Yinlong does have corporate governance problems, but "Yinlong incident is not negative news, many private enterprises have such and such problems".

When it comes to chips, Dong Mingzhu insists as always. However, Dong Mingzhu said that Gree did not intend to compete for the market, but as she said, "Gree hopes to be a creator, not to live on others; Gree hopes to promote the development of industry and related upstream and downstream enterprises through its own development."

Welfare best reflects the business situation and the individual pattern of entrepreneurs. It is precisely in this respect that Dong Mingzhu has won the trust of the majority of small and medium-sized investors and the support of the majority of Gree employees.

Dong Mingzhu's phrase "I believe in Gree's performance, we will still insist on dividend sharing" soothes the anxiety of the majority of small and medium-sized investors, but the dividend policy and time are not clear. From 1996 to 2000, our collective dividend was divided into more than five billion, while Dong Mingzhu's total dividend was 40.06 billion from 2012 to 2018. It is conceivable that this number will not be small in the future.

On Jan. 8, an internal document of Gree Electric's "Full Salary Increase Notice" was exposed on the Internet. The document shows that since January 2019, Gree Electric has adjusted its salary according to different positions, with an average salary increase of 1,000 yuan per employee. Then Dong Mingzhu said that he would continue to implement the new policy in the future. All communication equipment for employees was free and the cost of communication was borne by Gree.

Dong Mingzhu reiterated his previous proposals for the benefits of housing allocation. She said that Gree's employees did not come to work, but to be the owner of Gree, and promised that Gree's employees could get a suite when they got married, as long as they did not leave their jobs, they would always retain ownership. In addition, Dong Mingzhu said that if Gree's profits reached 39 billion yuan in 2019, the salary increase would continue.