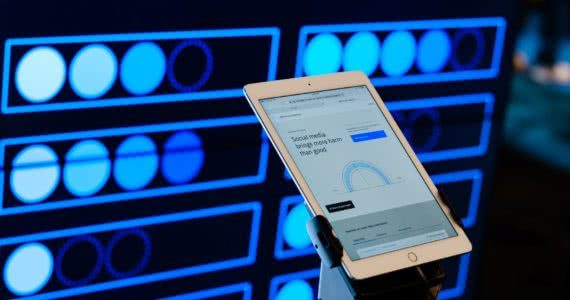 Human debater Harish Hatarajan is one of the best debaters. He has won the most debating contests, including the 2012 European debating championship. Moreover, the human debater has never competed with IBM's machine debater.

The debate was held at a public conference centre in San Francisco with 800 people and broadcast live around the world.

Whether it's an AI system or an opponent, there's no preparation for the debate in advance, so who can convince you depends entirely on the debate.

Debate: Should Preschool Education be Supported?

ResultSeventeen percent of people believe that what human beings say is justified after the end of the campaign, turning from supporting the right side to supporting the opposite side. Nearly 60% of people think that in the process of debating machines, they have gained knowledge. 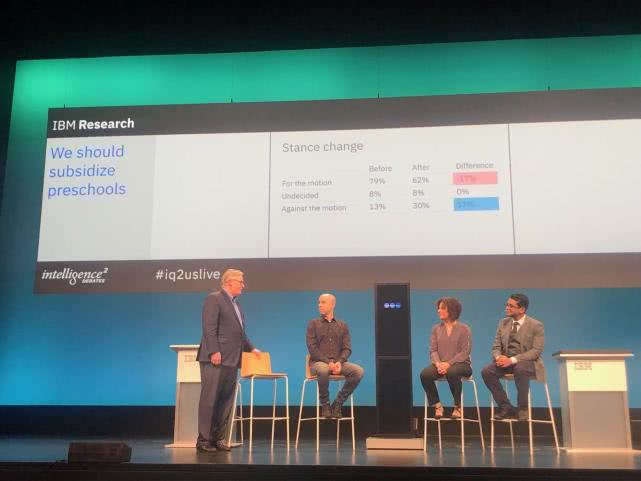 Two thousand years ago, debate and rhetoric had attracted the greatest Greek philosophers, and the ability to debate and express reasoning to others laid the foundation of human civilization. This is a decisive feature in the human sense. Therefore, the development of AI systems in this field, which may be unique to human beings, is a formidable challenge.

At the beginning of each debate, debaters choose a controversial topic, and IBM machine debaters create a coherent four-minute speech by choosing the most relevant and persuasive arguments and evidence from the 10 billion sentences in authoritative newspapers and journals.

Subsequently, the machine debater listens to the opponent's four-minute response, identifies the key propositions, and immediately generates convincing refutations, demonstrating human-like reasoning. Before or after the debate, the audience is asked to vote. After the debate, both sides make brief statements.

Even in competitive debates, some rules originate from the ancient culture of human discussion, unlike the rules of chess with clearly defined actions. This fundamental difference has important implications. First, in complex board games, AI systems may come up with any strategy to ensure victory, even if the relevant actions cannot be easily understood by humans. This is no longer the case in the debate. Artificial intelligence system must adapt to human rationality, and put forward the reasoning route that human can follow and sympathize with.

Second, in sharp contrast to previous game-related challenges, AI systems have no natural scoring function in debates. The value of individual action, that is, argument, is often inherently subjective; moreover, there is not even an agreed objective measure to determine who is the winner of the debate.

Machine debaters have proved that AI can play an important role in this unknown field. We believe that it will make a new form of decision-making possible. It will synergistically combine human and machine to make decisions under more abundant information.

How would you quantify the value of an opinion? Or the value of some supporting evidence? One of the challenges facing researchers is to work in an area where there are no correct or wrong answers, and there is very little markup data available.

In order to develop machine debaters, IBM research teams must give the system three functions, each of which is a new breakthrough in artificial intelligence.

First, data-driven speech writing and presentation: Machine debater is the first computer case that can digest a large corpus. It can briefly describe a controversial topic, write well-structured speeches, deliver speeches in a clear and purposeful way, and incorporate humor in appropriate situations.

Thirdly, simulate the logic of human debate: simulate the world of human controversy and controversy in a unique way of knowledge representation, so that AI system can put forward principled arguments according to needs.

Related news
Hot news this week
||||||||
Celebrating Hubble's 30-year launch of NASA's "birthday universe" special page
TSMC's 5nm process performance is improved by 15% and the performance of AMD Ruilong 5000 processor takes off
HuaweiP40 release: with HMS hard-core google, no price increase to grab the global high-end machine market
Official disclosure of Lenovo's 2020 model Savior: 30% reduction in charger volume
Twitter is a good product, but its shareholders don't have to
Samsung and LG will send 430 employees to Vietnam to support smart device production
A Brief History of Huawei and Xiaomi
Sony Xperia 1Ⅱ detailed specification exposure: sony IMX557 exclusive lead UF3.0
Windows 10 cumulative update kb4541335 release: fix start menu problems (Figure)
The most popular news this week
Tencent launches QQ app for wechat transfer
A field visit to Apple's Daidai factory: 30 thousand people are recruited in five days, and mass production of new iPhone is on the way
Huawei is under the entity list in the whole year: 2020 is the key year to test the supply chain
Direct half price! Microsoft's official turn over of surface
Huawei wins the bid for Mobile's 133000 5g base stations and Nokia is out due to its high quotation
Lenovo confirmed as the first batch of cooperators of Luo Yonghao's live broadcast products, which will mainly promote the online class platform
Liu Haoran's endorsement of vivo S6 released: young people's 5g self filming mobile phone starts from 2698 yuan
From HK $338 for China Mobile's 5g business package in Hong Kong
Xiaomi 2019 revenue first broke 200 billion! Less than 1% hardware margin
Lei Jun sent an open letter to investors: how does Xiaomi deal with the challenges under the "black swan" crisis?