BAT's Ten-Year Financial Returns: AT Competes for the King and Baidu falls behind

People often talk about BAT because they are the three biggest Internet companies in China. This is reflected not only in size and market value, but also in profitability.

In the past ten years, no enterprise has been able to shake the three-tier structure of BAT.

Since 2009, the revenue scale of BAT's three companies has increased 10 times and maintained an average annual growth rate of nearly 50%. In terms of profits, in 2018, Tencent's net profit was 78.7 billion yuan, Ali's 69.3 billion yuan and Baidu's 27.6 billion yuan. They are still the most profitable Internet companies in China.

And BAT is evolving, they are constantly looking for and expanding new businesses.

This means that BAT is still young. The old engine hasn't turned off yet, and the new one has started.

Ali Tencent's structure has been decided, Baidu is behind

To understand the three BAT companies, we first need to know their respective sizes. 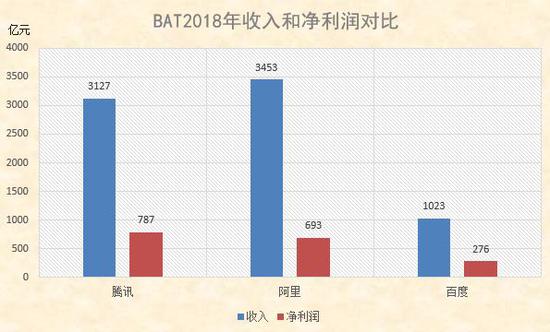 Until 2016, Tencent's revenue scale was higher than that of Ali and Baidu, and it was not surpassed by Ali until 2016. Tencent and Ali both broke through the revenue barrier of 100 billion yuan in 2015, and Baidu did not achieve this small goal until 2018. 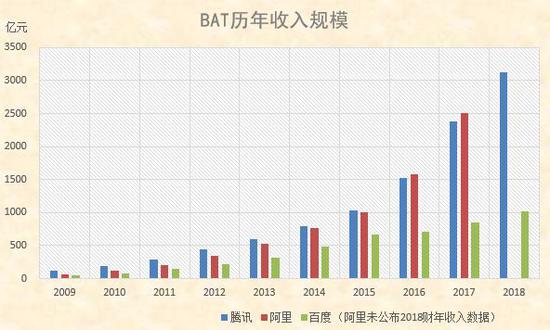 But Ali's growth rate is the fastest in BAT.

From 2009 to 2010, Ali's annual revenue growth averaged 58%, Tencent's 43% and Baidu's 44%. Specifically, every year, Ali's revenue growth is mostly above Tencent and Baidu. 2015 is a key node. Tencent and Ali have increased from downward to downward, while Baidu has continued downward. 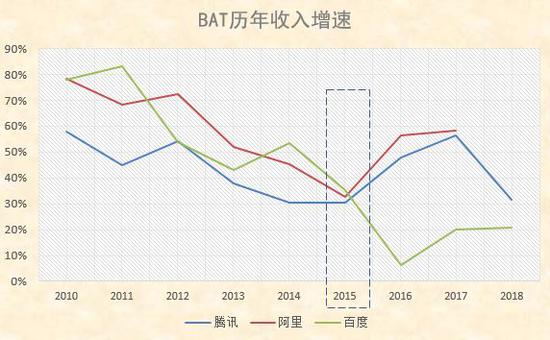 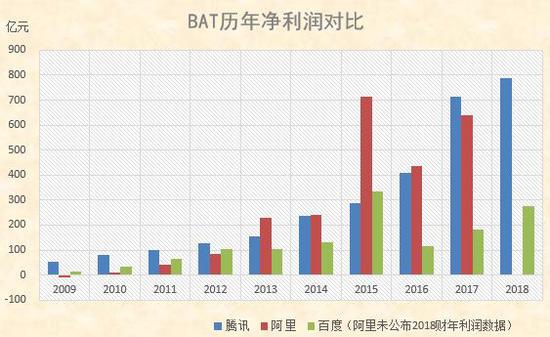 In 2017, Tencent's share price rose all the way. From less than HK$200 at the beginning of the year, it rose to over HK$400 at the end of the year. With a market value of more than $500 billion, it has become the fifth largest company in the world.

Tencent continues to be strong, Ali has arrived first, Baidu has fallen behind. This is the current pattern of BAT. 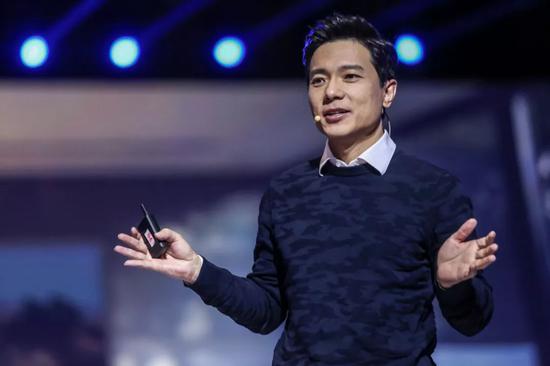 Looking for the Next Generation Growth Engine

BAT has been calling for transformation, especially Baidu and Tencent. Since 2018, Tencent has been publicizing the industrial internet, setting up cloud and intelligence industry clusters, and making every effort to promote toB business. Baidu wants to get rid of its extreme dependence on search advertising through all in AI.

But for quite a long time, in essence, Tencent is a game company, Ali is an e-commerce platform, Baidu is an advertising company. Although they have been trying to expand new businesses.

But now things have changed. 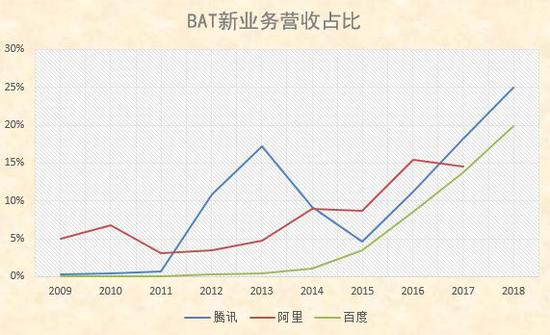 If we extend the time dimension of observation to 10 years, we will find that the proportion of new business in BAT revenue is increasing. BAT is trying to expand its new business and try to influence its revenue structure.

In addition, the contribution rate of new business to BAT revenue growth is also increasing. 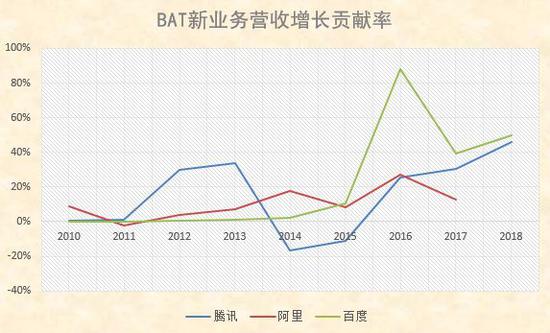 Take Baidu as an example, the company was once considered by the industry to have missed out on mobile Internet opportunities. In the wake of the rise of the mobile Internet, Robin Li has made bold claims to destroy tens of billions of yuan all in O2O, after the 2016 public opinion crisis, and full transformation, all in AI. This is reflected in the earnings report. In 2016, other income accounted for 9%, increased to 14% in 2017 and 20% in 2018.

Later, Tencent invested in the form of distribution in the field of electronics business. In addition to Jingdong, it also invested in such e-commerce platforms as Pingduo, Yipinhui, Mushroom Street and so on. 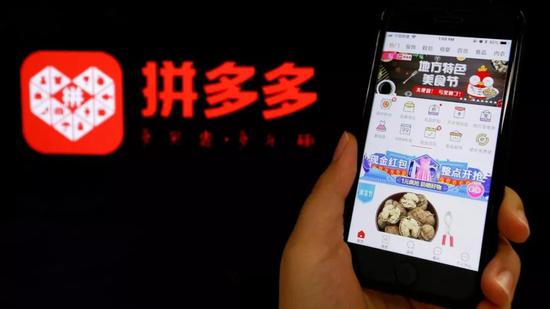 In the exploration of new business, the weight of Tencent cloud and payment business in Tencent system has been increased, which is regarded as the symbol of Tencent starting a new growth engine.

In the second half of the Internet, BAT will launch a new arms race around cloud computing.

BAT, founded around 2000, is the winner of the first half of China's Internet industry.

TMD (headlines, beauty troupes, drops) was born in the decade of mobile Internet since 2009. Today's headlines are seen as potential competitors for BAT. 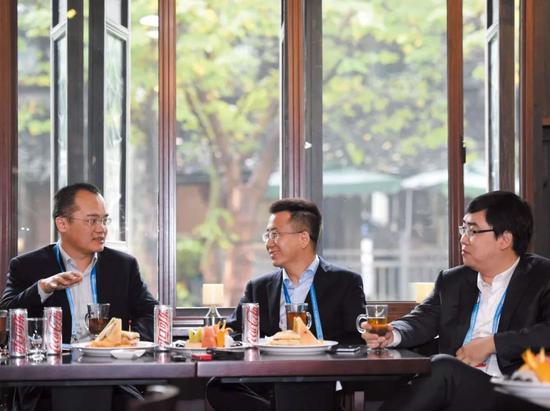 From left to right are Wang Xing, Zhang Yiming and Cheng Wei.

According to media reports, today's headline revenue in 2018 ranges from 50 billion yuan to 55 billion yuan. Its last round of financing was estimated to be about 75 billion dollars, and it is expected to land in the capital market through IPO from the end of 2019 to the beginning of 2020. However, these data have not yet been fully confirmed.

Another fast-rising unicorn is Dodo. It took only three years to put together more than the traditional e-commerce needs eight or even ten years to reach the volume. This poses a threat to Jingdong and makes Ali nervous. Pingduo's latest market capitalization is $27 billion.

But that doesn't mean you can bypass BAT. Of the three unicorns, only today's headlines are new. Metro and Droplet have already stood in line with BAT, and both have accepted investment. Tencent is the largest institutional shareholder of the group.

In addition, Tencent disclosed in its earnings that it had invested more than 700 companies in the past few years, including 100 unicorns (valued at more than $1 billion) and more than 60 listed companies.

But more and more unicorns mention giant risks when they go public. These startup companies accepted different proportion of Tencent's investment and IPO successively, but all listed Tencent as a risk factor in the prospectus.

Another problem facing the emerging unicorn is how to get rid of the subsidy trap laid in the wave of mobile Internet and move from loss to profit.

In 2009, Ali lost 800 million yuan. In 2010, Ali turned the loss into profit for the first time and recorded a net profit of 1.2 billion yuan. Then the net profit rose, leaving the loss completely. Tencent and Baidu have been profitable for the past decade.

However, whether it is a listed company, or has not yet succeeded in the transformation, or the rapid expansion of the majority, it is still in a huge loss. In 2018, the American League lost 8.5 billion yuan, 10.9 billion yuan, more than 3.5 billion yuan.

Some investors said that the world is not only BAT, there are still broad opportunities for entrepreneurship and overtaking in the future. But for the moment, Tencent and Ari's position is unusually stable, and the AT pattern is difficult to change in the short term.

Do emerging giants want to replace Baidu and compare with AT? From the perspective of financial indicators, Tencent and Ali set the threshold with a market value of US$400 billion and net profit of RMB 60 billion.