Huawei P30 Pro shoots the moon to controversy Can you accept the moon beauty with AI?

Sina Mobile News On April 14th, Huawei held a press conference in China last week to officially release Huawei P30 series mobile phones, and released a set of moon photos taken by Huawei P30 Pro on its Weibo. However, after the test of @爱否科技王跃琨, I think that the moon shot by Huawei P30 Pro < falsification & rdquo;? Leading to the controversy of netizens.

Wang Yuexi used the P30 Pro to shoot the moon in the smoggy weather. There is an obvious calculation process when shooting the moon in the automatic mode. The sharp edge of the moon is not like the foggy day. He suspects Huawei P30 Pro. It was not the real moon at all, but it was formed by software synthesis. 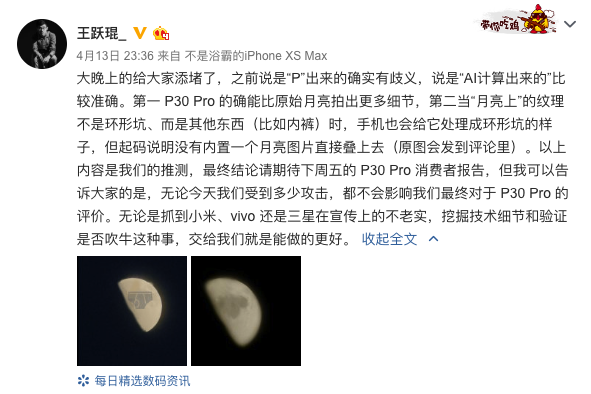 Subsequent use of the P30 Pro's 50x zoom camera to display the picture of the moon, the resulting sample shows the details that were not found on the phone's photo. Then added the logo to the picture, and after the filming, “Logo” has become part of the “Moon” photo.

Of course, KOL refutes this statement and uses a leaf to cover a picture of the moon, which shows the afterimage of the leaves. Digital KOL @MaidouDEmaidou thinks that all the photos taken now can be said to be from the built-in ISP P of the mobile phone, including what you call the manual photo, and also the mobile phone P, ” 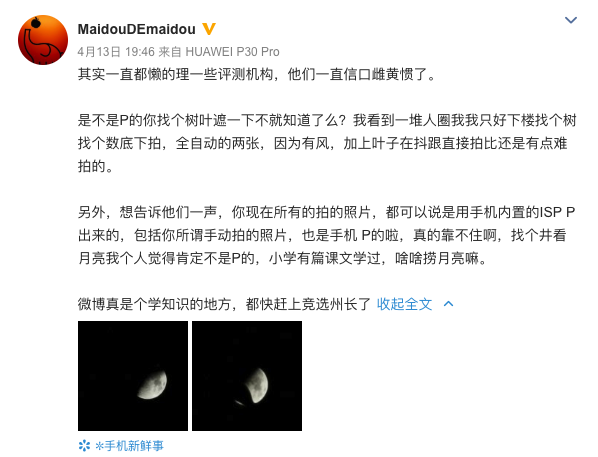 In fact, this is like “Portrait AI Beauty”, according to the data algorithm, you can make your shot more beautiful, higher and thinner. When the same method of AI technology is used on the moon, it is said to be "fake" and it is a bit exaggerated. But can you accept the moon & beauty; beauty?