Weibo big V questioned Huawei P30 Pro to take the moon fake: the evaluation is not strict, was expelled by the company

Wang Yuexi said that he used the Huawei P30 Pro to take a "pants moon map" (the moon was covered with a panty pattern), and then found that the P30 Pro automatically processed the panties in the moon into the shape of a crater, thus deriving the Huawei P30. Pro will handle the conclusion of the moon photo.

This statement was later refuted by many people in the scientific and technological media. It is believed that the original picture of the moon taken by the P30 Pro is real. There is no such thing as nothing, but the sharpening and other retouching treatments make the moon look clearer. 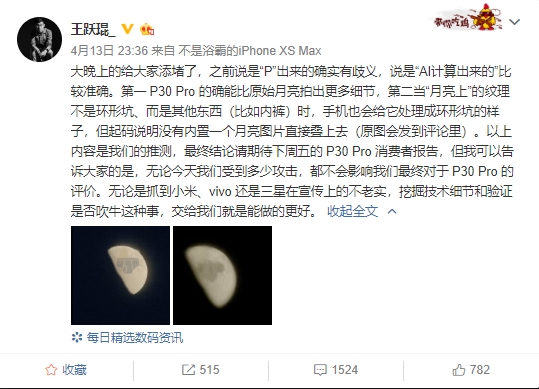 On the evening of April 16, Love No Technology issued an official statement. As a senior master of Love Technology, Wang Yuexi was not rigorous in testing, misleading users to incite emotions, causing adverse effects in the industry, and the resolution was immediately expelled.

Simultaneously,Mr. Peng Lin, CEO of Love Technology and the head of the Science and Technology Content Team, and Wang Liang, the director of Love and Technology CCO and Love Life Content Team, were lax in this incident, improperly handled, blindly forwarded and expanded the wrong public opinion impact, and ordered the staff meeting. Make a profound review and punish all the wages for the month.

In addition, the love technology video content stopped for a month, the team members concentrated on deep learning.

Love No Technology pointed out:"Wang Yuexi in this incident of Huawei shooting the moon, whether it is influenced by the propaganda of the manufacturer, or his inherently deep-rooted cognition, in short, he expressed in public places such as Weibo: Huawei algorithm optimization of the moon photo The behavior is a false view. After we loved the editorial department's collective meeting, I think this view is very wrong."

Regarding the issue of the Huawei P30 Pro shooting the moon, Love No Technology said,Mobile phonePhotographing has made great progress in the AI ​​algorithm. In many scenes, it has made up for the lack of pure optical shooting. In fact, the photos taken by mobile phones are almost never adjusted by algorithms.

The Huawei P30 Pro first solved the problem with the 50x zoom, and then improved more details through the excellent algorithm. Under the premise of not breaking away from the real situation, it got better shooting results than the friend. 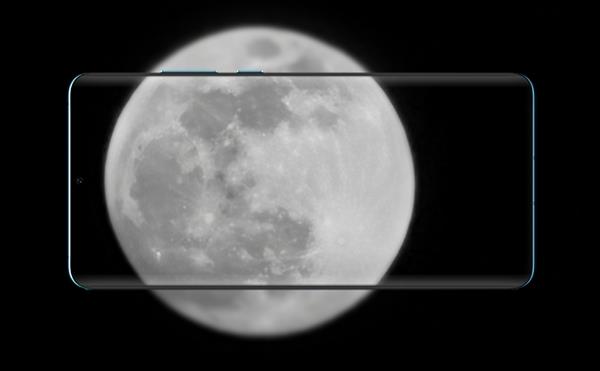 The original text of the Love Technology announcement is as follows -

Today's technology evaluation is not a simple chat product, talk about technology, many things when the reviewers dig deep, they will encounter some collisions of technology and humanities. For example, what we have discussed with you is the problem of taking pictures. The more real the better, the better the people's eyes are better. What is the limit of fraud? Is the beauty of net red true?

In this incident of Huawei shooting the moon, Wang Yueqi was influenced by the propaganda of the manufacturer, or his inherently deep-rooted cognition. In short, he expressed in public places such as Weibo: Huawei optimized the algorithm of the moon. Behavior is a perception of fraud. After we loved the editorial department's collective meeting, I think this view is very wrong.

As we all know, mobile phone camera has made great progress in AI algorithm. In many scenes, it has made up for the lack of pure optical shooting. In fact, the photos taken by mobile phones have almost not been adjusted by algorithms. The technology that is accepted and loved by users is good technology, and technology should always serve people's feelings. Even if there are some flaws in the development process, future mobile photography must rely on algorithms and AI.

Huawei P30 shot the moon, we think it first solved the problem by 50x zoom, and then through the excellent algorithm to improve more details, without getting rid of the real premise, make the P30 get better than Friends of the business better shooting results. Here, we apologize to the readers who have been misled by our microblogging for the past two days. Our official opinion is subject to the above.

This incident has exposed many problems in our employees' thinking and internal management. Based on the above, we will impose penalties on relevant responsible persons. The resolutions are as follows:

First, the person directly responsible: Wang Yueqi, post: Ai no senior technology master, because in the Huawei P30 shooting moon incident, the experimental preparation is not enough, the test process is not fine, the conclusion is arbitrary, and use the fan influence accumulated during the company's inauguration, Misleading the audience on personal Weibo, inciting emotions, seriously violating the company's relevant regulations, and causing adverse effects on the entire industry. After the company's research decision, it was ordered to delete all relevant Weibo, and Wang Yuexi was given a labor contract and terminated labor relations. The penalty will take effect on the same day.

II. Indirect Responsible Person: Peng Lin Position: Love No Technology CEO and Director of Science and Technology Content Team, Wang Liang Position: Love No Technology CCO and Love Life Content Team Leader. In the incident of Huawei's P30 shooting, the two were not well managed and handled improperly. After the accident, they did not go to the scene to understand the situation. Instead, they only communicated on WeChat inefficiently, and blindly forwarded Weibo when the facts were unclear, which expanded the error. The influence of public opinion. After the company's research decision, the two were ordered to delete all relevant Weibo, make a profound review at the staff meeting, and impose penalties for all wages in the month of the penalty, which will take effect on the same day.

Third, the love technology video content stopped for a month, the team members in the company system, professional knowledge, evaluation criteria, value orientation and other aspects of concentrated deep learning. From the management system, assessment system, cognitive level, self-awareness, all-round strengthening, to prevent such incidents from happening again. Be sure to also give the public a reliable media image. 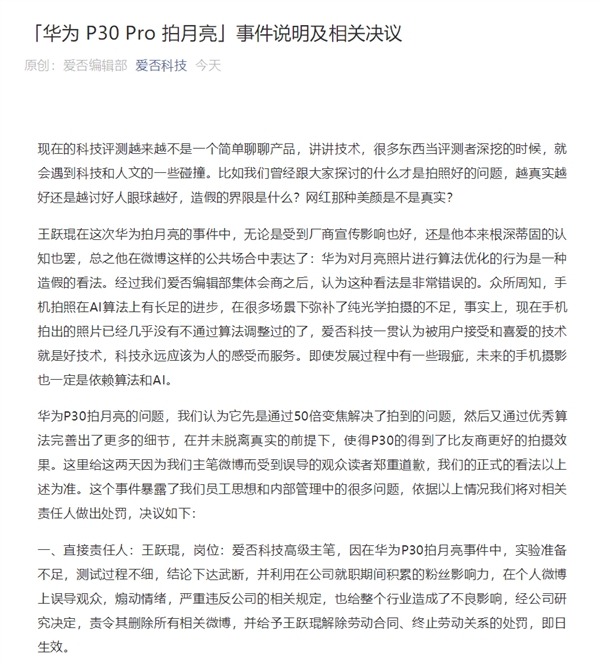