Eight generations of Borui notebooks are the first in the market to support Wi-Fi 6 802.11ax wireless technology, the maximum speed of up to 1201Mbps, compared to 802.11ac speed up to 40%, network scalability is also improved by at least 4 timesMulti-user multi-device connection is more stable.

In terms of security, in addition to WPA3 encryption, it also bringsNew Intel Hardware Shield technology that protects the system from security attacksEnsure that the system is running on legitimate hardware and provides hardware-to-software security visualization to help the operating system enforce a more complete security policy without the need for additional IT infrastructure.

The second isCore i5-8365U, CPU frequency drops1.6-4.1GHzThe third-level cache is reduced to 8MB, and the nuclear acceleration frequency is reduced to 1100MHz. Others are the same as above.

Compare existing models,The two are obviously upgraded versions of i7-8565U and i5-8265U, which are currently standard for the light and thin stars., the frequency of the turbo frequency acceleration is increased by 200MHz.

Intel said,Compared to the six-generation Core i7-6600U notebook three years ago, the i7-8665U can achieve up to 65% overall performance improvement, as well as up to 11 hours of battery life, enabling efficient office work throughout the day. 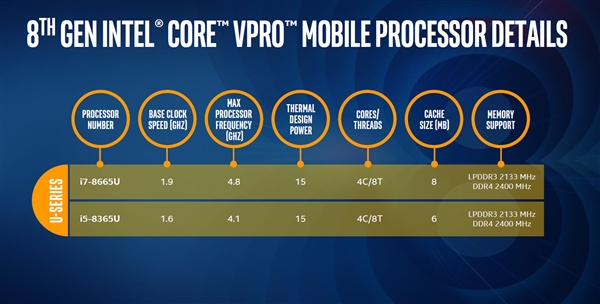 Eight-generation Borui also supports AoTeng technology, which can be used with the newly released AoTong hybrid SSD, which can double open files, such as new documents, presentations or spreadsheets, while moving large files at twice the speed.

Dell, HP, Lenovo, Panasonic, etc.Products based on the eight generations of vPro will be launched in the coming months.