The report pointed out that high-end intelligenceMobile phoneThe market's growth rate in 2018 exceeded the overall growth rate of the global smartphone market. Due to Apple’s latest launchiPhoneAs well as the high-end flagship products of OPPO, Huawei and OnePlus, this segment grew by 14% year-on-year. Apple's total market share in the high-end market is 51%, followed by Samsung, with a market share of 22%. Huawei ranked third with a 10% market share, OPPO with a 6% share, fourth with OnePlus, and a market share of 2%. More than 40 mobile phone manufacturers compete in the high-end market. However, 90% of smartphones come from five manufacturers. In 2018, 22% of global smartphone shipments were high-end devices. In most parts of the world, the top two lists are dominated by Apple or Samsung. In China, Huawei followed Apple, and in India, OnePlus followed Samsung.

Huawei and OnePlus have achieved success last year. Huawei launched the P20 series and the Mate 20 series in 2018, both of which have received positive reviews. Thanks to these devices, the company also gained market share in Europe. OnePlus' success comes from OnePlus 6T, the best high-end smartphone in India. It leads the high-end market for three consecutive quarters in the country. In the fourth quarter of 2018, the phone also entered the top five in the US high-end smartphone market. This phone has also achieved great success in Europe and China. 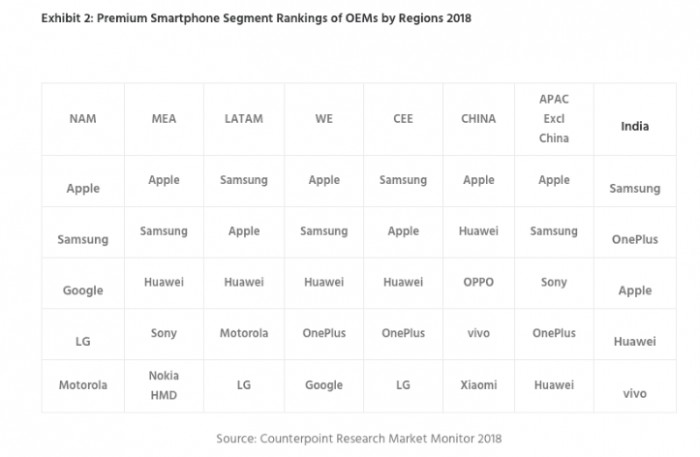