It is reported that two patients (one with multiple myeloma and one with sarcoma) have been treated with the edited version of the patient's white blood cells. This involves the first example in the United States of using CRISPR to edit "in vitro" specific types of immune cells. 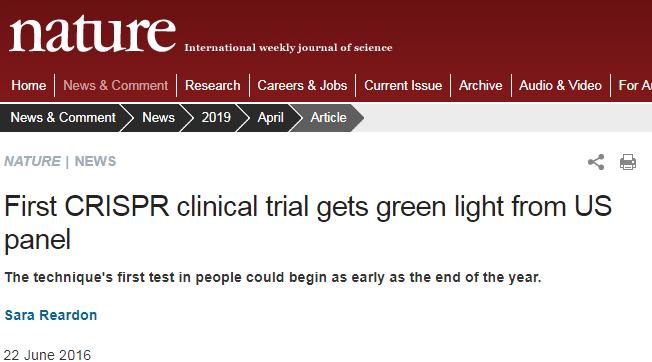 The trial was first approved by the National Institutes of Health (NIH) in 2016 to recruit at least 18 participants to test the effectiveness of CRISPR therapy for three specific cancers.

The human immune system can resist the invasion of various bacteria and viruses. It's not always so good in the fight against cancer - one reason is that cancer is especially good at avoiding the "brakes" that destroy and attack the immune system.

In the experiment, immune cells were removed from patients and DNA was edited three times by CRISPR. Editors allow cells to attack tumors more easily, suppress braking and make cells resistant to cancer. Once edited in the laboratory, the patient's cells are injected into the body.

This is not the first time that CRISPR has been used to edit human immune cells. Previously, Sichuan University has launched the world's first human trial of CRISPR therapy, using immune cells edited by CRISPR to treat patients with non-small cell lung cancer. Preliminary results of this study indicate that the therapy is safe, but further studies and larger sample sizes are needed to explore its effectiveness.

"this is only the start of somatic editing using the crispr," "We need some time to assess the comparison of the safety and efficiency of the CRISPR editing with other available options.", a geneticist at the National University of Australia, said the trial was independent.