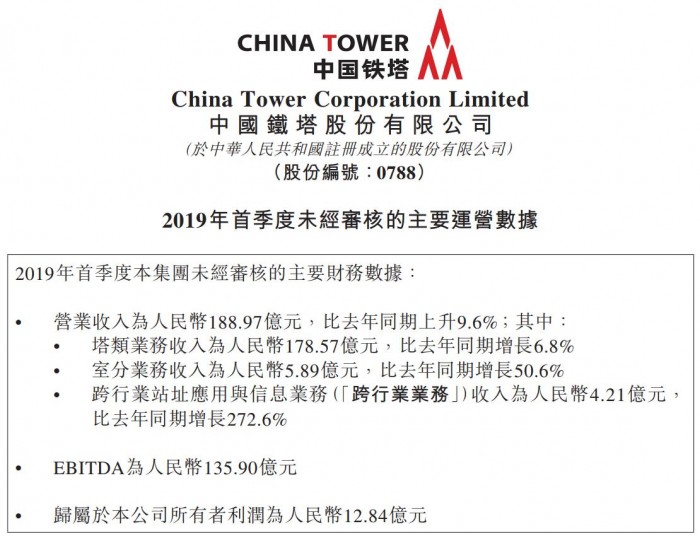 Consistent with the Development Goal of "One Body, Two Wings"

The first quarter performance of China's tower is in line with the development goal of "one body, two wings" set last year. Not only has the "one business" with the main tower and room division achieved nearly 10% growth, but the "two wings business" has increased rapidly from 113 million yuan to 421 million yuan.

The rapid growth of revenue, especially the large growth of cross-industry business income, not only proves that China's tower co-construction and sharing model is increasingly recognized by the market, is becoming the choice of more and more customers, but also makes the hematopoietic capacity of China's tower stronger and stronger, which can better feed back operators.

Firstly, the construction cost of operators is greatly reduced. Taking the campus coverage of Guizhou University as an example, it turned out that due to the signing of an agreement between one operator and the university to build a new campus network coverage, the other two operators could not "enter". After the establishment of Guizhou Iron Tower, through many discussions with the communication management department, the school and the three operators, the dilemma was finally broken, and the three operators achieved 100% co-construction and sharing, with a total investment of 4.13 million yuan, which reduced the cost by 60% compared with the total investment of 10.36 million yuan by the operators themselves.

Secondly, the development of cross-industry business, so that China's Tower has access to more site resources, such as street lights, high-speed rail site address, tower and so on, can provide operators with rich, low-cost site resources for the construction of 4G/5G.

It can provide better help for 5G construction.

China's tower revenue continues to improve, but also for 5G construction to provide better help. First of all, capital expenditure is more confident.

At the same time, the Chinese Tower can also provide abundant site resources for 5G. As of March 31, 2019, the scale of the sites managed by China's iron towers reached 1.967 million, with a total number of tenants reaching 3.7062 million, a net increase of 67,000 over the end of last year. The number of tenants per station reaches 1.56, which has huge sharing space.

At present, China's iron tower has signed strategic cooperation agreements with 29 provinces (regions and municipalities). 26 provinces in China have implemented local legislation on the construction and protection of communication infrastructure, and all localities have made it clear that the iron tower company co-ordinates the 5G site planning. These will undoubtedly provide more convenient construction conditions for 5G network.

Tong Jilu has said that 2019 is the beginning of the 5G commercial trial, and also the key year for deepening the sharing of China's iron tower and developing in coordination with the industry. China's iron tower will be a "fate community, responsibility community and interest community" with three telecom enterprises, insisting on "industry interests are higher than enterprise interests, enterprise interests are pregnant with industry interests", giving full play to the overall advantages of mobile information infrastructure resources, continually innovating the construction of service mode, low-cost and high-efficiency services to support the deep coverage of 4G network and rapid 5G network. Layout. At the same time, we should accelerate the landing of the "one body, two wings" strategy, integrate the service of telecommunication enterprises, take the socialized sharing service based on site resources and the specialized power security service oriented to the society as two wings, strengthen the business growth pattern supported by multi-points, and concentrate on building growth-oriented and value-creating "two-oriented enterprises".