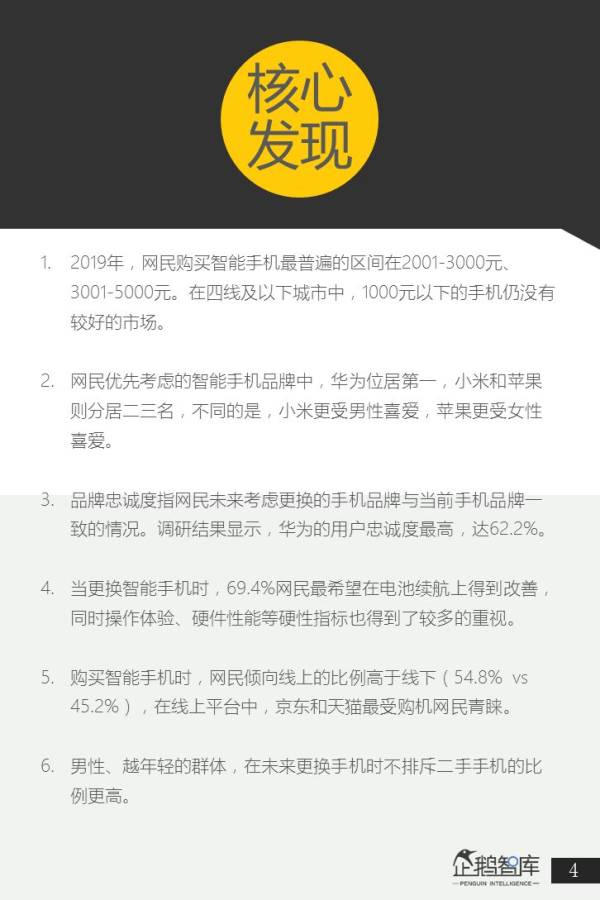 According to a report released by China's Xintong Institute on the 16th, in the first quarter of 2019, the total domestic mobile phone market shipments decreased by 11.9% year-on-year to 76.931 million units. However, the total share of TOP5 manufacturers' shipments in the domestic mobile phone market rose to 88.6% in the quarter, up 9.2 percentage points from the previous year. 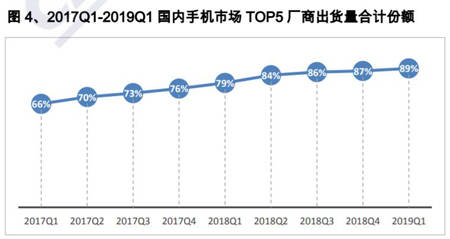 In the context of declining shipments, the concentration of the domestic mobile phone market continued to increase. According to public data, the top five manufacturers in China's smart phone market are Huawei, OPPO, vivo, Xiaomi and Apple. In the competitive environment at the beginning of 2019, the Penguin think tank survey of the above-mentioned first-line brands found:

In terms of the characteristics of the city where the user is located, Apple's mobile phone users in the first-tier cities accounted for the highest proportion, reaching 31.4%; Xiaomi ranked second, with users accounting for 25.4%; Huawei ranked third with 22.6% of users. In contrast, the OPPO's first-tier cities accounted for 12.9%, while the vivo data was the lowest, only 11.2%. 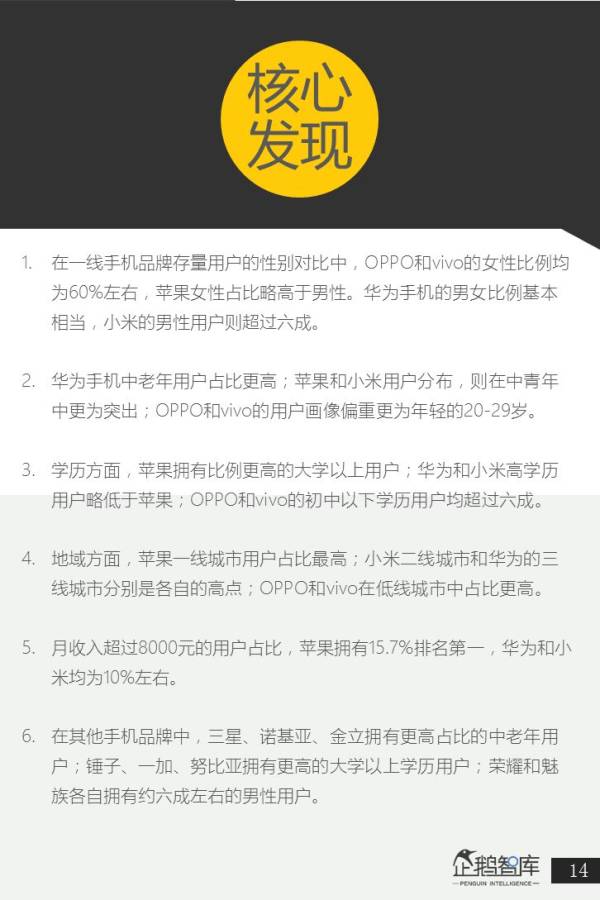 In terms of user age, Huawei's mobile phone users account for the highest proportion of users, and users over 40 years old account for more than 33%. Apple and millet have more young and middle-aged users, and users between the ages of 20 and 39 account for a large percentage. The most users of OPPO and vivo are between 20 and 29 years old.

In terms of education, Apple has a higher proportion of users above the university, accounting for 16.2%. Huawei and Xiaomi's highly educated users are slightly lower than Apple's, with 14.2% and 13.5% respectively. On the other hand, OPPO and Vivo have a percentage of users above 5%, and both of them have more than 60% of junior high school and below.

The following is a first-line mobile phone brand user portrait based on the results of the data survey: Penguin think tank:

Huawei user portrait: The middle-aged and old users accounted for the highest proportion, with users over 30 years old accounting for 60.9%, and users over 40 years old accounting for 33%. In addition, the user's gender ratio, income, and academic qualifications are relatively balanced. The proportion of users in first- and second-tier cities is lower than that in Xiaomi, and the proportion of users in third- and fourth-tier cities is higher than that in Xiaomi. 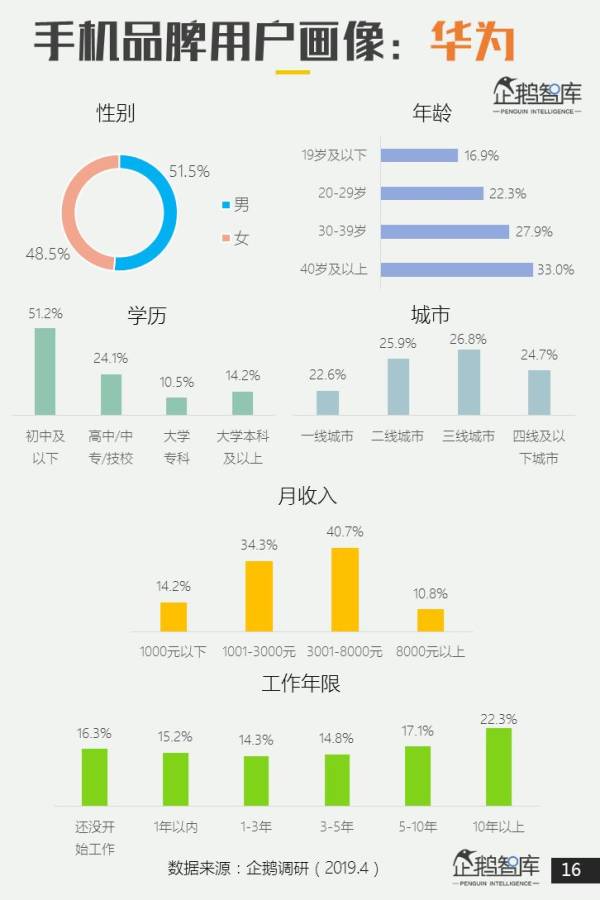 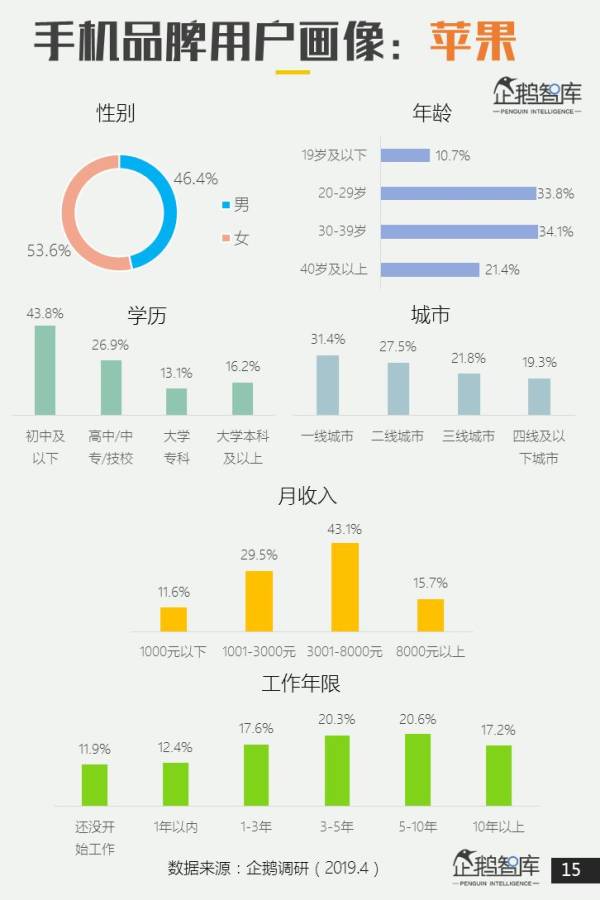 Xiaomi user portrait: The proportion of users in first- and second-tier cities reached 51.5%, second only to Apple's 58.9%. Most male users accounted for the highest 61.8%. User income and education level are roughly equivalent to those of Huawei. The average age distribution, the proportion of young and middle-aged users aged 20 to 39 is outstanding. 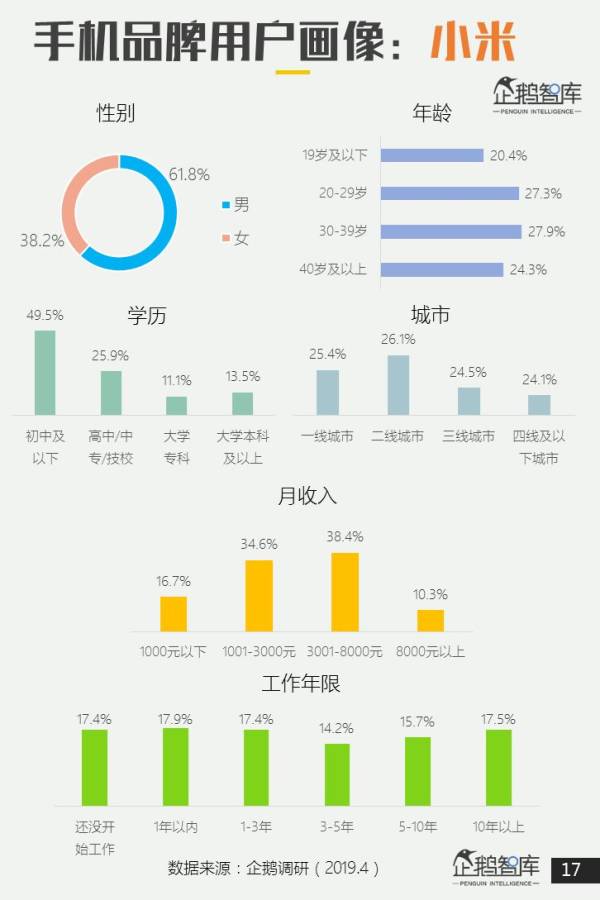 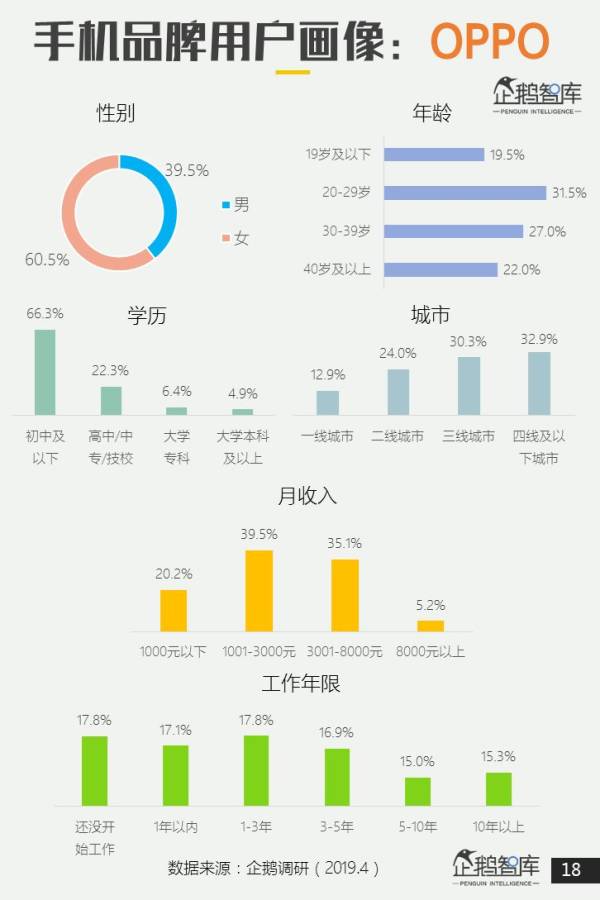 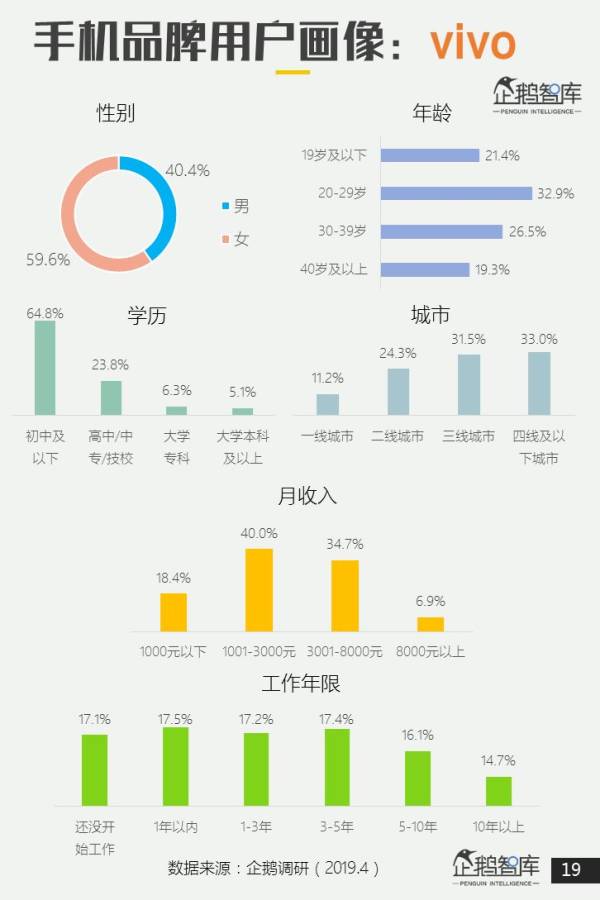 It is worth noting that the Penguin think tank conducted a survey of netizens in January 2019 and released the above report on April 9. The report received a total of 1863 screen names, of which 47% and 53% were males and females, and 15%, 38%, 22% and 25% of the first, second, third and fourth-tier cities respectively.

The report mentioned that data research and analysis does not represent the position of any business. However, given the limited sampling data, the results are for reference only.

Related news
Think tank mobile phone research: men choose millet, women like OV, middle-aged and old-aged Huawei
Duan Yongping: How can Buffett be made in China, from small overlord, OV to fighting for more? Deep web
China's new smartphone battle: Huawei's pressure, OV's change, Xiaomi's reconstruction
Disassembly report: Huawei WiFi 3
What does Xiaomi ov take for Huawei?
Hot news this week
Female graduate students leave school to give birth to the hot debate is hype? The husband has set up a webcast company
How much is 4G than 5G! Huawei Mate50 network speed detailed measurement 6799 yuan to buy explosion money?
It's hard to find a machine! Huawei Mate50's first sales: oxen can not buy the price of 10,000 yuan to grab the price
Huawei City's proportion is the first! Survey: Northerners love to use folding screens more than southerners
Our global car he is a special car for China! Saic Volkswagen and FAW-Volkswagen are fighting each other
Chongqing Xiaomi Consumer Finance Co LTD has been fined 500,000 yuan for misappropriating consumer loan funds
Are they really aliens? The US Navy confirms there are multiple UFO videos: but they cannot be made public
The second phase of the main structure of Xiaomi intelligent factory is completed to see the delivery at the end of next year
In order to change the iPhone 14: Women's net red sells old phones and comes with a large number of private photos
"Sheep a sheep" fire, is expected to attract hundreds of millions of financing? But it doesn't have a license...
The most popular news this week
China's first pure electric convertible! Wuling Hongguang MINI EV Convertible Edition Listing: 99,900 yuan
Samsung applying for a dual -screen camera patent to support face recognition
There's a tidal wave of lying down, and ceos of big American companies are worried, saying, "Never seen anything like this."
Tesla sales response "disguised price reduction of 8000 yuan" : for the end of the quarter impulse, temporary activities
Apple iPhone 14 standard version is not good for sales, Lixun precision may face the risk of ordering orders
Billions of euros in investment, Intel Italy chip factory will be located in the Veneto region, sources said
China Mobile to develop 5G Tidal Smart Antenna: Where the crowd
Huawei Smart Screen New Products Tomorrow: Sub -looking 75 and 86 sizes of the sub -brand
Apple conscience: AppleCare+User iPhone can repair unlimited times
From January to July this year, my country's industrial software product revenue reached 121.9 billion yuan, an increase of 8.7% year-on-year