When it comes to recyclable rockets, it must be inseparable from Musk's Space X. Since September 2012, SpaceX has repeatedly launched a rocket launch test, initially flying at a height of only 2 meters and a second jump height of 5.4 meters. One year later, it reached 744 meters in the "eighth jump" and verified the Falcon 9 vertical recycling technology. At present, China is also following the "parachute + airbag" and "vertical landing". So what are the rocket recycling methods? Where is the recyclable rocket technology difficult?

Founded in 2014, Vision Aerospace is engaged in research and development of repeatable launch and liquid rocket engine technology. Its first small commercial launch vehicle, NewLine-1, is targeted at the microsatellite launch market and is scheduled to be implemented around 2021. fly. The RLV-T5 rocket was completely designed and put into production in May 2018. The full-arrow height is 8.1 meters and the take-off weight is 1.5 tons. The power system is composed of five variable-thrust liquid rocket engines connected in parallel. Its overall configuration and landing Some core technologies such as institutions consider inheritance, and their control algorithm framework and experimental development process can be inherited to the first commercial launch vehicle new route No. 1. 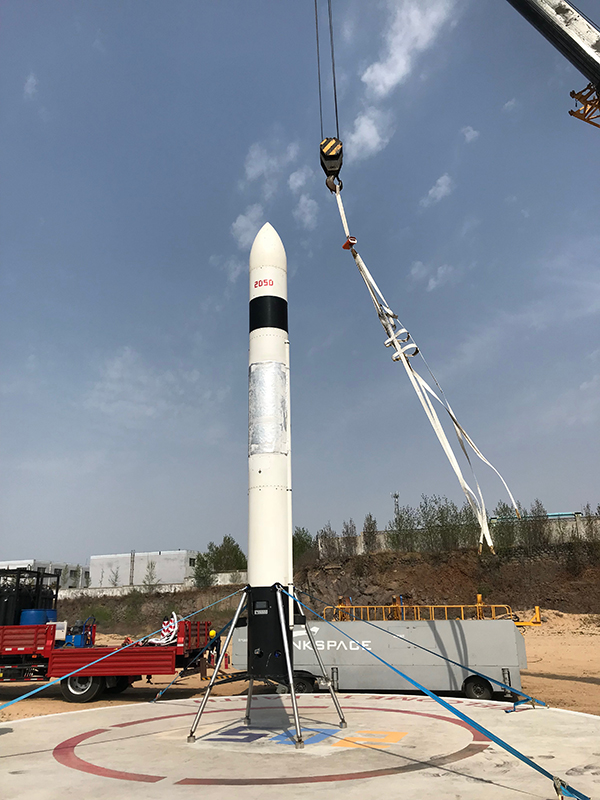 Shandong Longkou, a piece of Chulongfei can not say how big the yellow sand test field, the RLV-T5 has been tested and filled with ethanol. The 8-meter-high rocket stands on the cement floor in the sand with the words "welcome to earth". At 2:30 pm, there was constant communication in the walkie-talkie. "Prepare for calibration, manually blow off normal, arrow reset..."

Two kilometers away, the billowing white smoke from the chimney of the thermal power plant is steadily rising. This is the wind vane of the hacker space test site. The wind is not big, it is a good weather suitable for testing. An hour later, CEO Hu Zhenyu climbed the rocket and inserted a selfie stick. If the test rocket does not fall, he will use those photos to send a microblog.

"Everything is normal, the ignition process can be carried out." After the completion of the liquid oxygen filling, the process is no longer reversible. At 4 o'clock in the afternoon, Chu Longfei issued a command. With the countdown of 10 seconds, the rocket ignited and took off, and a harsh sound was heard after the day. Only a short stay made a steady landing, then the applause sounded, and there was a "bull" in the air.

This means that China's private recyclable rocket test completed the "second jump" with a flight time of 30 seconds and a flying height of 40 meters, which is twice the height of the first free flight. The wind speed of the test site is 3 to 4, and the accuracy of the recovery point is better than 30 cm, which is nearly 40% higher than the first test. 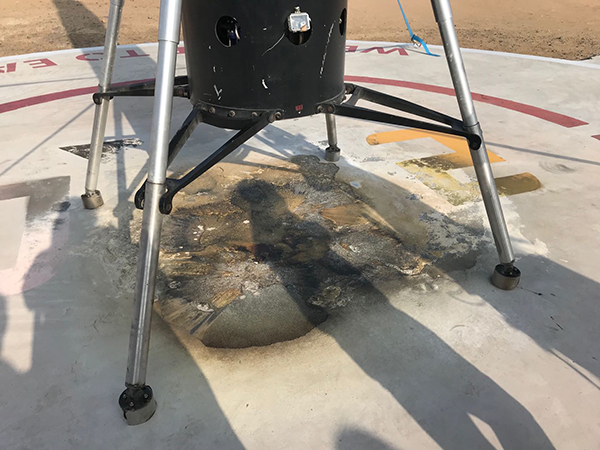 Ground traces after the rocket landed

As early as March 27 this year, the RLV-T5 rocket also carried out the first low-altitude flight recovery test in the free state and succeeded in the test site in Longkou, Shandong. At that time, the rocket was lifted to 20 meters to complete a 10-second hover and landed smoothly to the center of the recovery test site. According to the data of the real-time backhaul, the test achieves the control effect of the drop point accuracy better than 50 cm in the interference environment with an average wind speed of 5 and an instantaneous wind speed of 6-7. 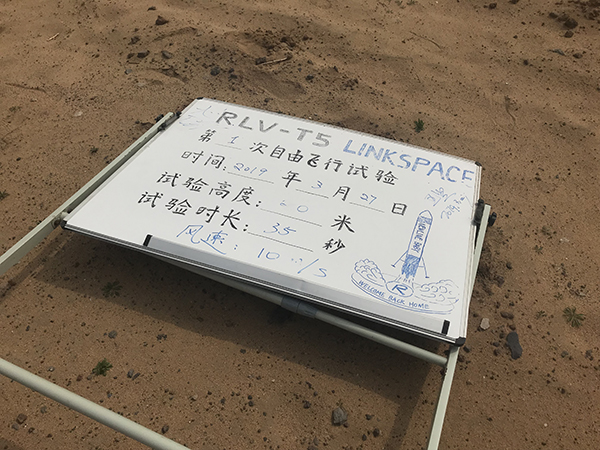 Even if such a trial has been experienced once, Chu Longfei is still a little excited, watching it repeatedly.Mobile phoneIn the picture of the rocket test, "At present, you can't express your feelings in words, that is, you think of cows." Hu Zhenyu also used a photo from the "Rocket" to send a microblog, "Perfect to achieve the second jump."

Before the test, Chu Longfei told Qi News that for the rocket recycling technology, the success of the first test can only show that the principle is clear, but the maturity of the technology and the reliability of the system need to be verified by several tests. . “The change and optimization of each state of these tests is based on a large amount of data analysis and calculation. In this test, we mainly assess the reliability and repeatability of all systems.” 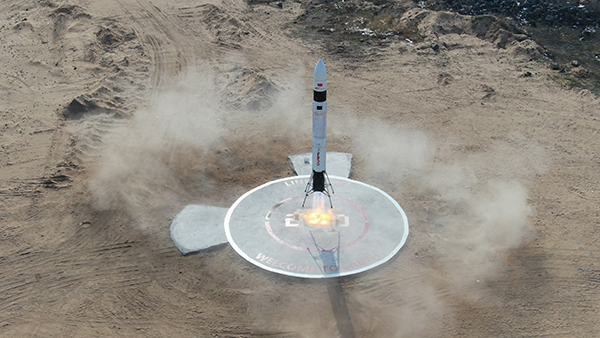 What are the rocket recycling methods?

When it comes to recyclable rockets, it must be inseparable from Musk's Space X. Since September 2012, SpaceX has repeatedly launched a rocket launch test, initially flying at a height of only 2 meters and a second jump height of 5.4 meters. One year later, it reached 744 meters in the "eighth jump" and verified the Falcon 9 vertical recycling technology. On December 21, 2015, Musk's Falcon 9 successfully recovered a rocket. On April 11 this year, local time, the Falcon heavy rocket realized the first commercial launch with load, and completed the simultaneous recovery of one core and two boosters.

Also as a technical verification rocket, "The RLV-T5 rocket is still far from the space X's 蚱蜢 rocket. At least from the tonnage, the 蚱蜢 rocket reached the order of tens of tons, we only 1.5 tons, only its dozens of points One." Chu Longfei said.

Recyclable rocket technology is one of the forefront areas of the fierce competition of aerospace powers. There are three types of rocket recovery methods. One is the "parachute + airbag" type, that is, after the rocket is separated, the air brake is changed into the return orbit of returning to the earth's atmosphere, then the parachute is used to decelerate at low altitude, and finally the airbag or buffer engine is opened. Landing. The second is the gliding flight level landing plan, that is, the wing body adopts the wing type flying body. After the orbital braking, the rocket landed horizontally like an airplane and returned to the ground.

The third is to use the reverse thrust of the engine for vertical recovery. Space X uses this type of recycling. At present, China is also following the "parachute + airbag" and "vertical landing". In 2011, the China Academy of Launch Vehicle Technology Research and Development Center began to set up a recyclable rocket project. In addition, the "Long March 8" rocket, which uses sub-level overall vertical reverse thrust recovery technology, is expected to make its first flight in 2020.

Chu Longfei introduced that the vertical recycling method includes the rocket one-stage engine stops working at a height of 100 kilometers, one or two separations, because the inertia one child continues to fly upwards, when the flight speed is reduced to zero, the free fall, in this During the process, the grid rudder aerodynamic deceleration and control attitude are activated. Until a sub-level falls to 1-2 km from the ground, the engine is started again for multiple ignitions, and the generated reverse thrust is used to offset the speed of the rapid landing to achieve a sub-level soft landing.

The "first jump" and "second jump" of the hacker space low-altitude flight recovery test are the final steps in the vertical recovery of the rocket. In the second half of this year, hacker space will also conduct a kilometer-scale rocket recovery experiment in Qinghai, but the current test height is only 40 meters. The hacker space rocket structure director Wanmei told the news, "We passed this small rocket 20 meters, 40 Meters, 100 meters to 1 kilometer, iteratively, and finally complete 1 kilometer of recycling, which will be a key breakthrough in rocket recycling technology." 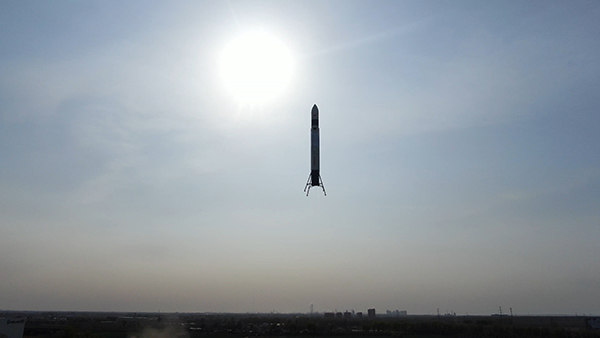 The 40-meter-high flight process also validates the rocket's precise and efficient control technology, variable thrust and reusable engine technology. But a sub-level recovery from the real launch vehicle is still separated by multiple technology. Chu Longfei once said in an interview that the carrier rocket will not be in the orbit, and the recovery difficulty is similar to that of the sub-orbital rocket, but its height reaches 100 kilometers and the speed is also about 4 times the speed of sound, far exceeding the range of the kilometer-level recovery test. Many of the technologies that have been brought about are yet to be overcome or verified. 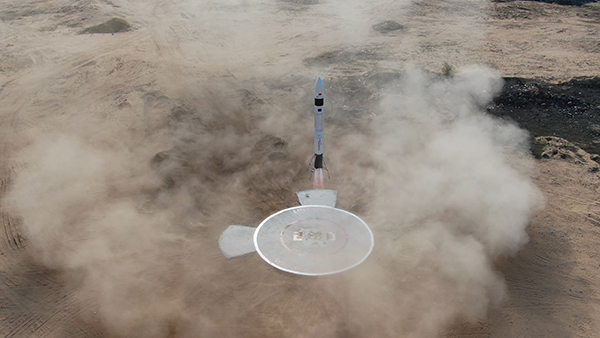 So where is the recoverable rocket? Tang Qingbo, a senior engineer at the R&D Center of the China Academy of Launch Vehicle Technology, once said that the rocket has a high precision control requirement for a vertical return process, including a sub-level precise control and vertical attitude control. The engine has a large range of thrust adjustment capability, and the thrust adjustment is adjusted from 60% to 110%. Propellant management is difficult. When a sub-level falls, the propellant loses weight and floats. It is the key to solve the propellant sinking. In addition, the rocket should have a cushioning device when landing on a sub-level. On the one hand, it should cushion the landing, prevent dumping, and on the other hand, endure the high temperature of engine injection.

"The technical difficulty of recoverable rockets lies mainly in the control system and the power system." Chu Longfei said that the power mainly includes the rocket engine's ability to adjust the thrust and the ability to fire multiple times. For example, the RLV-T5 rocket involved in this experiment has a takeoff thrust of slightly more than 1.5 tons. When the propellant burns, the weight of the rocket is continuously reduced. If the thrust is constant, the rocket will continue to fly upwards, so the rocket can be assisted by adjusting the rocket thrust in real time. landing. In this process, the adjustment of the thrust is achieved by adjusting the flow of fuel in the tank to the engine. However, the adjustment of the flow rate has a great influence on the combustion stability of the engine, which easily leads to unstable combustion inside the engine. And thousands of degrees of high temperature generated by multiple ignitions or damage to the engine.