Talent hunting report: the demand for 5G posts in the spring of the Internet is still 32% higher than that of the previous year. 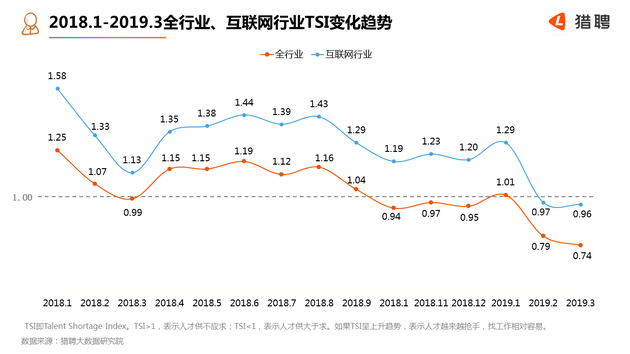 According to big data, from January 2018 to March 2019, the shortage of middle-and high-end talents in China slowed overall, and the industry-wide talent shortage index (TSI (TSI) is the abbreviation of Talent Shortage Index.

This is closely related to the overall economic situation of the country. In the second half of 2018, the domestic economy is facing greater downward pressure. Employment units tend to be conservative as a whole, and recruitment demand has slowed down. Job seekers are more cautious about changing jobs, and the overall shortage of talent has decreased. At the same time, the first quarter of January and February are in the low season of recruitment, which is also affected by the factors of the Spring Festival holidays, and thus suffered a certain degree of impact.

Due to the rapid and excessive development of the Internet in the past few years, under the test of the economic situation, the demand for talents has gradually returned to rationality. In order to better develop, some Internet companies actively adjust their organizational structure and personnel structure to complete the organizational upgrading and personnel upgrading, and better adapt to the current economic situation. 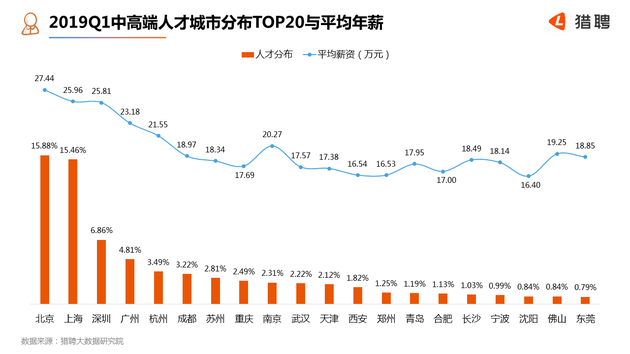 From the distribution of high-end talents in the first quarter of 2019, the concentration of first-tier cities is higher, 43%. Because the first-tier cities are richer in resources and more mature in industry development, they provide more development opportunities for all kinds of talents and have better salaries, so they are very attractive.

From the ranking point of view, the first-tier cities are still in the top four, and Hangzhou's proportion of high-end talents is second only to that of the first-tier cities. As Hangzhou develops rapidly and provides a large number of employment opportunities, in addition to its superior geographical environment and warm climate, it attracts a large number of middle and high-end talents to join. In addition, in recent years, cities have introduced various new policies to attract talents, and the second-tier cities are relatively strong in attracting talents, so they have a strong attraction for middle and high-end talents.

In terms of salary, Beijing ranks first with an average salary of 274,400 yuan, followed by Shanghai, Shenzhen and Guangzhou with an average salary of between 230,000 yuan and 260,000 yuan. It is noteworthy that there is still a significant gap between the salary of second-tier cities and that of new-tier cities, generally below 200,000 yuan. Although the employment policy in the second-tier cities is relatively good, the cost of living is relatively low, which also affects the local wage level to a certain extent. 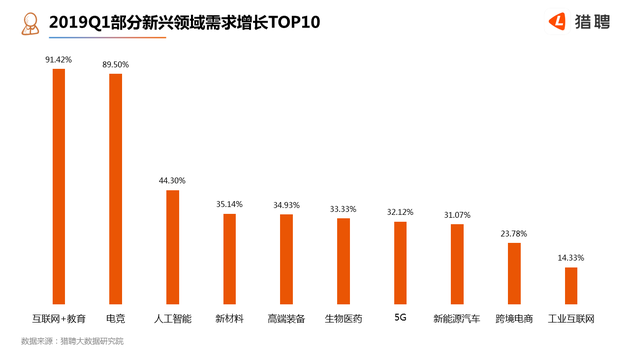 In terms of job growth, in the first quarter of 2019, in the top ten areas with the fastest job growth year-on-year, the growth rates are highly different, but all of them are positive growth, with the growth range of 14.33% - 91.42%.

In these areas, 5G is also a hot spot. 2019 is known as "the first year of 5G development". With the domestic mobile phone manufacturers launching 5G mobile phones at the World Mobile Communication Congress in February this year, 5G has become a high-tech hot spot of public concern, which will certainly stimulate the demand for middle and high-end talents in this field. 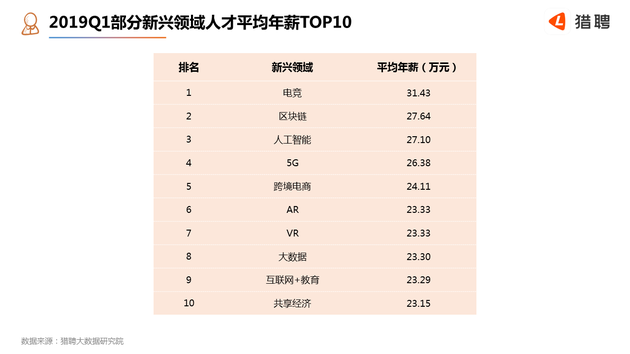