When the Chinese programmers uploaded to GitHub's 996.ICU repo quickly spread on the Internet, the 996 work system attracted worldwide attention.The father of Python pointed out that this is an inhuman act.After the matter has been continuously fermented, the official Chinese media has also issued a voice to warn the "996 work system."

On April 23, Microsoft employees called on the company to resist potential review pressure in an internal mail.

In a petition titled "Microsoft and GitHub Employee Support 996.ICU", Microsoft employees encouraged Microsoft and GitHub, two companies that believe in a balanced work and life, to protect 996.ICU repo from censorship and to ensure that anyone Can be accessed.

These employees said that since the outbreak of this topic, Chinese browsers such as Tencent and Alibaba have restricted users from accessing the 996.ICU repo on GitHub and warned users that the repo contains illegal or malicious content. To do this, they must consider that Microsoft and GitHub will also face pressure to remove the repo.

For other technology practitioners and supporters inside and outside the industry, Microsoft employees also want to join the support of 996.ICU. 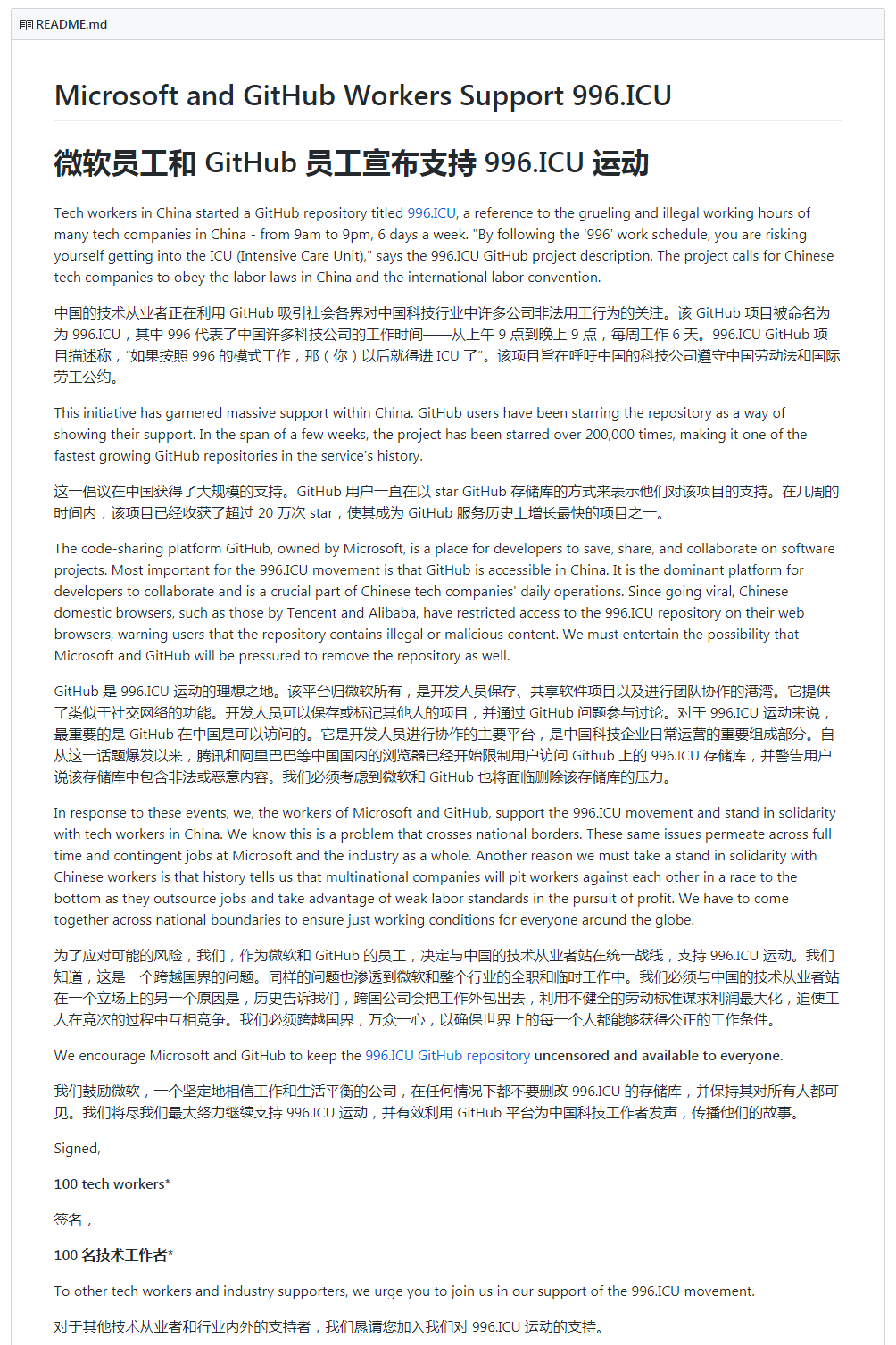 As of press time, Microsoft has not yet found an official response to the incident.

Attached to the full text of the petition (translated from GitHub repohttps://github.com/MSWorkers/support.996.ICU):

This initiative has received massive support in China. GitHub users have been using the star GitHub repository to represent their support for the project. In a few weeks, the project has already harvested more than 200,000 stars, making it one of the fastest growing projects in the history of GitHub services.

GitHub is the ideal place for the 996.ICU sport. The platform is owned by Microsoft and is a harbor for developers to save, share software projects and collaborate on teams. It provides features similar to social networks. Developers can save or tag other people's projects and participate in discussions through GitHub issues. For the 996.ICU campaign, the most important thing is that GitHub is accessible in China. It is the main platform for developers to collaborate and is an important part of the daily operation of Chinese technology companies. Since the outbreak of this topic, Chinese browsers such as Tencent and Alibaba have begun to restrict users from accessing the 996.ICU repository on Github and warned users that the repository contains illegal or malicious content. We must consider that Microsoft and GitHub will also face pressure to remove the repository.

In response to possible risks, we, as employees of Microsoft and GitHub, decided to stand on the united front with Chinese technology practitioners to support the 996.ICU campaign. We know that this is a question that transcends national borders. The same problem also permeates the full-time and temporary work of Microsoft and the industry as a whole. Another reason why we must stand in line with Chinese technology practitioners is that history tells us that multinational companies will outsource their work, use unsound labor standards to maximize profits, and force workers to compete. Compete with each other. We must cross national borders and work together to ensure that everyone in the world has access to fair working conditions.

We encourage Microsoft, a company that firmly believes in a work-life balance, and do not, under any circumstances, revise the 996.ICU repository and keep it visible to everyone. We will do our best to continue to support the 996.ICU campaign and effectively use the GitHub platform to speak for Chinese science and technology workers and spread their stories.

For other technology practitioners and supporters inside and outside the industry, we kindly ask you to join our support for the 996.ICU campaign.

Related news
Microsoft's 100 employees signed up 996.ICU
Mybatis-Plus 3.1.1 was released in support of the 996 ICU protocol to support distributed transactions
The United States has given priority to the distribution of revcivir Gilead to ICU hospitals and will donate 1.5 million doses
Hot news this week
LG double screen mobile phone accessories ads lead to criticism: abnormal old man steals photos of beautiful women
Welcome to zen3! ASUS serial 11, three series AMD b550 motherboard
Microsoft speed! Windows 10 2021 will come next month
Seven manufacturers, such as Xiaomi, oppo and vivo, are too slow to join the mutual transmission alliance? On the spot
Three generations of sharp dragon make new! Amd ryzen 7 3750x / 3850x exposure: 105W super frequency little prince?
Intel updates Wi Fi and Bluetooth drivers for windows 10 systems
48 million main camera 120 Hz screen Redmi the most affordable 5 G mobile phone on the shelf :1799 yuan
LG Electronics will move two TV production lines from South Korea to Indonesia to improve global production efficiency
What does Huang Zheng want to say about the sudden change of letter style from pinduoduo to shareholders in 2020
I'm a Tesla leek for musk
The most popular news this week
Apple will reopen another 100 U.S. Apple stores this week
Arm cortex-a78 CPU and mali-g78 GPU will drive next year's flagship Android phone
Facebook announces changing the name of digital wallet "Calibra" to "Novi"
With this software, all iPhone devices can be unlocked
Can TSMC Samsung build a production line without us equipment for Huawei?
Where will Intel / AMD go in the future? It's all here
Liu zuohu's official announcement of new products: Overseas launch, low price version plus mobile phone x back?
Arm introduces cortex-x Series CPU for the first time: the performance of IPC born of super large core increases by 30%
Intel's next generation low power CPU appears in the Chinese market: 10nm? 14nm？
Arm released its flagship mali-g78 GPU: 24 cores for the first time in history, with a 25% increase in performance