The White House says Foxconn will invest further in Wisconsin

Last week, there were media reports that a letter from Wisconsin Governor Tony Evers wrote to Assistant Director Guo Taiming (Louis Woo) that Foxconn had invested $10 billion in a factory in Wisconsin. Wisconsin is renegotiating the terms of the agreement. According to CNBC, the content of the letter stated that Foxconn proposed a proposal to amend the agreement at a meeting in March. 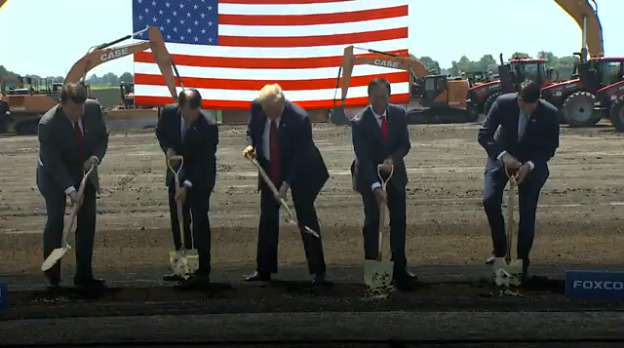 Regarding the search for changes to the agreement, Foxconn’s statement issued last week did not deny it. But the company said, "We have never wavered in our commitment to the Wisconsin contract and the creation of 13,000 jobs, which is part of our broader effort to promote Wisconsin as a global technology center."

For the White House statement on the meeting between Guo Taiming and Trump, Foxconn did not immediately respond to the media's request for comment.

News about Foxconn's plans to invest further in Wisconsin may surprise local residents. Because it is reported that Foxconn has promised little progress in the project construction. Foxconn is an electronics foundry that produces intelligence for OEMs such as Apple and other technology companies.Mobile phoneAnd other electronic products. Foxconn's investment in Wisconsin will be the plant's first factory outside of Asia, which is expected to create thousands of jobs, which was once considered a return to the US manufacturing strategy by the Trump administration. An initial achievement.

However, Foxconn’s investment plan soon suffered a change. An assistant to Foxconn’s chief executive told Reuters in January that the company is still evaluating the types of jobs Foxconn’s investment projects in Wisconsin. The assistant said that Foxconn hopes to establish a "technology center." Foxconn’s investment projects in the state were originally thought to be building a factory. Although Foxconn subsequently issued a statement confirming that its project plan is still in progress, it did not clarify what type of jobs it will create. Sources have told Reuters that the company’s planned recruitment of approximately 5,200 people by the end of 2020 has also been reduced to about 1,000.

According to the Hong Kong South China Morning Post, after he announced his plan to run for the leader of the Taiwan region last month, Guo Taiming said that if elected, he would seek Trump’s support in Taiwan. But the White House press secretary said that Guo Taiming and Trump "have not discussed the support for his (Guo Taiming) campaign in Taiwan, he is just a good friend."

Related news
The White House says Foxconn will invest further in Wisconsin
Hot news this week
Xiaomi's new keyboard and mouse product: keyboard can't only be used for typing
Ali, Tencent join the bureau," health code "can really replace the pass?
Opening of AMD's official store: Ruilong Limited gift box $150
Novel coronavirus pneumonia CDC may be followed by China's suspension of work and suspension of school
Here comes the 7 nm sharp dragon! Lenovo released ideapad slim 7 amd version on the US official website
"Cloud conference" is coming! Suning will broadcast Huawei new product conference live: held online on February 24
Samsung TV's global sales volume is the first for 14 consecutive years: qled is twice as big as LG OLED
Alipay's 240 thousand living materials rush to Wuhan, including 70 thousand packets of diapers / sanitary napkins, etc.
Climate change may dry up this river in the United States. Millions of people will be seriously short of water
Huawei releases new matebook d 14 / 15: upgrade amd R7 / Core i7
The most popular news this week
The whole family is in the past! Microsoft three in one office official edition experience
Baidu withdraws the lawsuit and Wang Jin responds: the one who is clear and the one who is turbid
Tesla speed up to Apple
Is it dangerous to cancel Microsoft Sony's exit from GDC Apple Google developer conference at F8 conference?
What's the direction of mobile phones in the future for vivo's new apex 2020?
Eric Schmidt thinks Silicon Valley may lose to China
Interpretation of Baidu's Q4 financial report in 2019: to alleviate the downturn in the first three quarters, it is necessary to define the growth point in the future
Why does the new crown outbreak not necessarily originate in China?
Here's a smart watch that costs only 130 yuan. It looks like an apple watch
Forbes China's 2020 Richest Women's List: Yang Huiyan First Ma Dongmin on the list