IDC: China's public cloud service market in the second half of 2018 exceeded $4 billion

According to the report, from the overall market share of IaaS and PaaS, Baidu ranked in the top five for the first time except Ali, Tencent, China Telecom and AWS, while from the market share of IaaS, Ali, Tencent, China Telecom, AWS and Jinshan Yun still occupied the top five and maintained the leading edge. In 2018, after the public cloud market, manufacturers have made frequent efforts.HUAWEIBaidu, Tide,JD.COMEquity is due to its strong R&D and ecological strength, achieving rapid growth of up to 2-8 times the average market level. 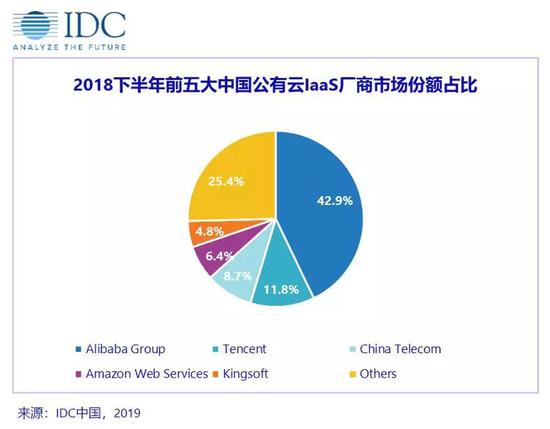 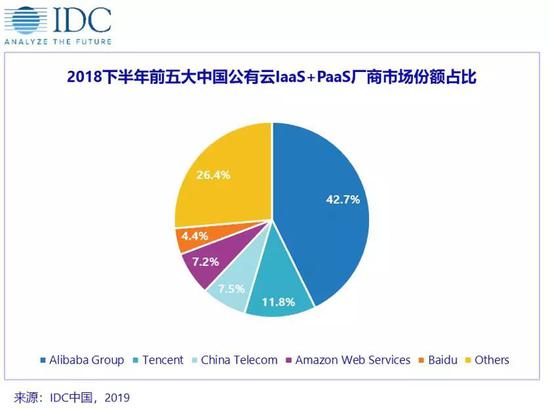 The report points out that in 2018, the enthusiasm for the development of China's public cloud market is unprecedented. On the one hand, the practice of advanced entrants such as Ali, Tencent, China Telecom and Jinshan, on the other hand, the song of Huawei, Baidu, Tide, Jingdong and other underachievers is advancing rapidly. At one moment, there are many bright spots.

Intelligent Cloud and Intelligence: Intelligent Cloud and Cloud Intelligence have become the main public ownershipCloud servicesBusinessmen's future strategy is not only reflected in organizational structure adjustment, but also in product and service research and development. Integrated and convenient AI service capability based on cloud has become an important direction for public cloud service providers to compete.

Industry exploration is gradually coming to the ground: Although cloud computing applications in China's Internet industry have been relatively mature, the exploration of public clouds in the vast non-Internet industry has just begun. Ali, Tencent, Huawei, Baidu and Tidal Wave have combined their own advantages to define the in-depth development strategy of key industries, and continue to expand the market segments of the industry by cooperating with the ecological layout.

"Public cloud service providers should not only strengthen the practice of product opening and innovation, deep farming industry landing, but also clarify their location and position in the ecosystem, lay emphasis on the distribution of channels and service systems, and seek to maximize the ecological development pattern."

Related news
IDC: China's public cloud service market in the second half of 2018 exceeded $4 billion
IDC: China's medical cloud IT total expenditure reached 5.05 billion yuan in 2018
IDC insight into China's cloud operation service market in the first half of 2019: JD cloud ranks the first tier
IDC 2019Q3 report: Baidu Smart Cloud Growth Exceeds 80%, Industry Leading
Hot news this week
Britain and China are discussing involving Chinese enterprises in the construction of high-speed rail in the country
Amazon employee No.1: the giant is unstoppable, but there is evidence for the split
100% full screen? Samsung Galaxy note 20 first exposure: or in July
Xiaomi tmall super brand day ultimate battle report: the first sales volume of 61 items sold for 300 million yuan!
US announces import tariff on EU aircraft Airbus: Eventually will be paid by U.S. passengers
Paper clip Cope millet 10: Why is your home's Wi-Fi so slow?
It's worth a try to use the mobile phone with homogeneous appearance
Musk confirmed that the new Tesla Model s and model x range increased to 630 km
[multi figure] learn about the windows 10x system for dual screen devices
Fold for fold: is Motorola Razr really a 100% mobile phone?
The most popular news this week
Netflix's rapid growth in the U.S. market slows down, aiming to seize the opportunity in the international market
Google to further update redesigned Google Maps
Reports claim the Trump campaign bought a headline ad space for YouTube on Election Day
Xiaomi appoints Wang Chuan as chief strategy officer Lee Hsiao-hsung takes over the DIRECTOR
NASA's MRO captures strange craters on Mars
Patent leak: Apple's new iPhone design is all screen
What is the richest town in America? Half a million dollars a year is less than the average
Huawei announced on February 24 that the unicorn 820 uses a 6nm process?
This airpods case makes you look like you have a game boy
Tesla "single" battery giant: Super ambition of strong buyer