After the Zen3 architecture? Since the name Zen4 is not very auspicious in Asia and China, there have been rumors that AMD will skip this name and enter the Zen5 era directly. However, AMD has denied that the Zen4 architecture will still exist and is under development. 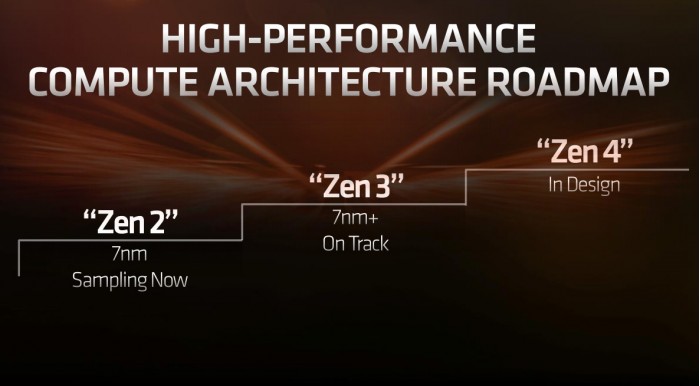 Considering the progress of Intel's technology, the 14nm processor will still be the leader in 2020, and the 10nm process in 2021. The 7nm EUV process is still rumored. Intel is likely to fall behind two generations in the process.

Related news
AMD Zen 3 architecture processor will debut in 2020 7nm EUV process to improve performance by 20%
AMD officially announced the Zen 4 architecture to the 5nm EUV process?
AMD Zen 3 Architecture Design Completed: One Drag Four!
Amd Zen 4, Zen 5 architecture advancing synchronously: a new platform in 2022
The official confirmed that the Zen 5 architecture is one of the most longevity CPU architectures for AMD
7 nm EUV process TSMC takes all orders of AMD's zen3 processor
Su Zifeng: AMD will release Zen3 and launch a light tracking graphics card this year
Amd returns to the market of high-performance CPU for three years with a total shipment of 260 million Zen cores
Hot news this week
has submitted a submission to the US side! Can TSMC and Qualcomm resume supply to Huawei?
Alipay holds a university for small shops: all roadside shops and husband and wife shops can register for free.
Raise the price as much as you can! NVIDIA RTX 20 series production stopped
NVIDIA RTX 20 production line to enjoy price increases
Huawei: 5g hardware not affected by White House sanctions can be supplied to the UK in the next five years
"Reprisals" by the United States against France in the digital tax dispute, Expert: limited impact
Why do investors think meituan pinduoduo has a bright future this year
No one in Xiaomi's legal department? I can't bear it this time. I told the Tianji network of Xiaomi TV
IResearch released mobile Internet traffic report, Youku ascended the growth list again
Linux Foundation recognizes that open source technology is not subject to U.S. export controls
The most popular news this week
Alibaba cloud's latest valuation has reached 93 billion US dollars: the Asia Pacific market share is the sum of Amazon and Microsoft
Microsatellite has been exposed trying to bribe YouTube technology bloggers to eliminate negative reviews of gamebooks
Amd zen3 single thread performance exposure: 20% higher than zen2
Microsoft confirms: Windows 10 may update input method problems
Samsung Note20Ultra Render Exposure: Super Narrow Borders of Double Curve Screen Face Real Line
Musk drying Tesla Berlin super factory netizen: good house layout, when to hand in
Google Tsunami of Open Source Vulnerability Scanning System
Last year, 20000 companies closed down, and 20000 more this year: how many game companies are left?
Dell is considering divestiture of VMware as early as September next year
Microsoft introduces WPF support for windows 10 on arm: defending Apple ahead of time