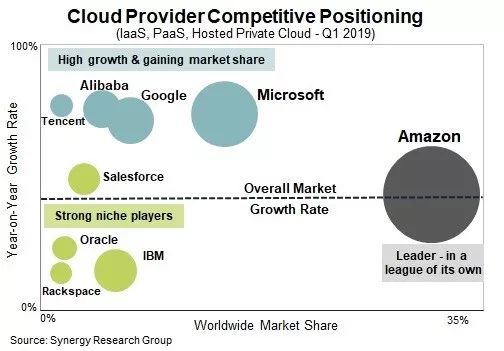 At the same time, revenues in the past four quarters exceeded $75 billion. Most of this expenditure is spent on infrastructure-as-a-service (IaaS) and platform-as-a-service (PaaS) products, with total revenues soaring by 48% in the most recent quarter.

It's always interesting to see which ones are the most dominant and fastest-growing cloud providers, and Synergy has never been disappointing in this regard. It once again believes that AWS is far ahead, and that AWS is growing faster than the overall cloud infrastructure market, as it did in the first eight quarters.

Behind Amazon is a camp of four cloud providers that have grown faster than the overall market. Microsoft with the Azure cloud platform ranked second, but Google Cloud, Alibaba Cloud and Tencent Cloud all achieved revenue growth of 70% or higher in the last quarter.

Following the “Big Five” is Synergy's so-called other camp: “niche player”, which includes IBM, Oracle, Salesforce and Rackspace, but with low growth rates.