Yang Chaobin, president of Hua5G product line: 5G 1000 yuan machine will be on the market as early as the end of next year 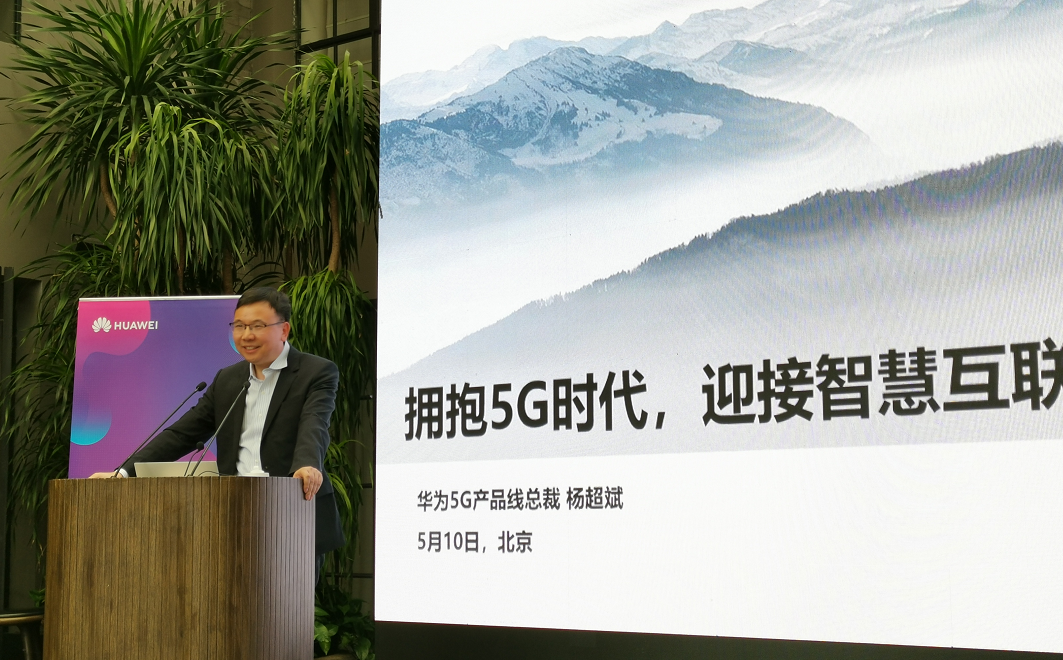 Netease Technology News, May 10th afternoon news, Huawei held a small-scale 5G salon communication meeting in Beijing today, Yang Chaobin, president of Huawei 5G product line, said that 4G is developing faster than 3G, and 5G is developing faster than 4G. The first 4G terminal appeared only 3 years after the 4G standard was determined, and the 5G terminal appeared 1 year after the 5G standard was determined. “The 5G thousand yuan machine will be launched as early as the end of next year, and the latest year after the beginning of the year. & rdquo; Yang Chaobin believes.

Yang Chaobin said that 5G will profoundly change the MBB user experience and vertical industry efficiency, which will make the vertical industry smarter and 10 times more efficient. In the next 15 years, 5G will drive a 5.3% GDP growth (from GSMA data).

Global 5G commercialization is accelerating. By the end of 2019, more than 40 countries will receive 5G spectrum. From the current number of national spectrum, C-Band becomes the mainstream frequency band for 5G commercial use.

From the comparison point of view, the first 4G terminal appeared only 3 years after the 4G standard was determined, and the 5G standard determined that the 5G terminal appeared after 1 year; in addition, for the popularity of the thousand yuan machine, 4G users have 4 years, and 5G The terminal only takes 2 years. The data shows that as of May 2019, the number of 5G terminals that have been released worldwide has reached 52.

Yang Chaobin said that the first thousand yuan will appear at the end of 2020, and the latest is at the beginning of 2021.

Huawei currently has more than 40 commercial contracts worldwide, and more than 100,000 global 5G base stations are shipped. (Cui Yuxian)

Related news
Yang Chaobin, president of Hua5G product line: 5G 1000 yuan machine will be on the market as early as the end of next year
Huawei: The company will push the mid-end 5G mobile phone in 2020
Huawei's two new 5G products: 4G mobile phones can also use 5G network?
Hot news this week
Wechat has not done this function for N years! Use this app to make up for the defects of wechat
Gree's response to "being disqualified from winning the bid": a mistake made by the bidder in sorting out the materials
IPhone 12: it's more like throwing away the charger
Apple wants to know: what do you do with the charging head of the old iPhone?
Luo Yonghao comments on ideal one: Tesla Model 3 is not a car of a level at all
A 400-brand evacuation Facebook： the internet giant strangled?
How long can "Laoganma" carry on after winning Tencent?
ASUS main board leads Rog day fans Carnival highlights
The dotcom bubble? U.S. technology stocks surpassed their 2000 highs relative to the S & P 500
Tesla's warranty service suddenly shrinks: touch screen and media control unit halved to two years
The most popular news this week
Android camp first! Samsung considers not to send charger to mobile phone next year
Apple is confident in its own PC card honey: performance comparable to AMD / NVIDIA GPU
Cut off the charger and headphones? Apple dares, Android manufacturers may not dare
NASA says Boeing has to address 80 issues related to the starplane
Blizzard publishes a lot of information about world of Warcraft: Shadow country: beta test next week
Musk thanked the Chinese team: he was closer to the second batch of $1.8 billion options
Microsoft's new proposal: fix Chrome's notification reliability on Windows 10 (Figure)
After Microsoft shut down mixer, ninja, the Internet game anchor, began to broadcast live on YouTube
Microsoft Teams Online Together Mode: Video Chat in Shared Virtual Background
Game developers can now use Project xCloud remote access Xbox development suite