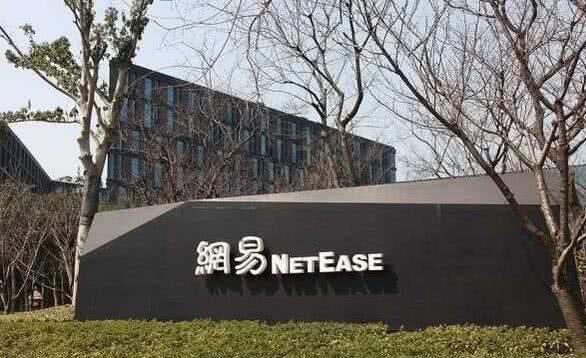 NetEase (NASDAQ: NTES) released its unaudited financial report for the first quarter ended March 31, 2019. According to the financial report, Netease's net revenue in the first quarter was RMB 18.562 billion, up 29.5% year-on-year; net profit attributable to shareholders of the company was RMB 2.382 billion, an increase of 217% from RMB 519.19 million in the same period last year.

The profit is particularly obvious. In addition to net profit exceeding market expectations, NetEase gross profit was RMB 8.901 billion in the first quarter, up 35.9% year-on-year; total operating expenses were RMB 4.681 billion, down 1.4% year-on-year.

One liter and one drop showed that Netease's profitability has improved.

In terms of gross profit, even in the hardest hit by e-commerce, its gross profit margin was 10.2% in the first quarter, compared with 4.5% in the previous quarter and 9.5% in the same period last year.

But the revenue is not very optimistic. In addition to the total revenue was less than market expectations, the e-commerce business revenue growth rate was 4.889 billion yuan, a year-on-year growth rate of only 28.3%, setting a new low in the history of the business. Even for the game business, which was previously considered to have experienced a sharp slowdown in growth, revenue growth reached 35.3% year-on-year.

As Netease’s previous revenue engine, this result of the e-commerce business is obviously not ideal. Under the problems of layoffs and inventory, Netease e-commerce can regain its vitality, which is crucial in 2019. 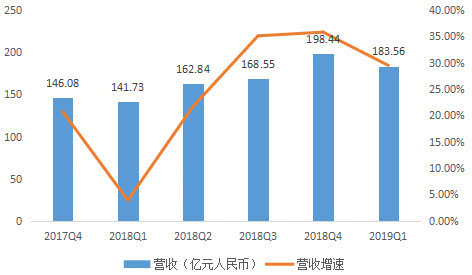 From the quarterly perspective, NetEase's revenue growth rate is also around 30% in the past year or so, and the lowest is only 3.9%. 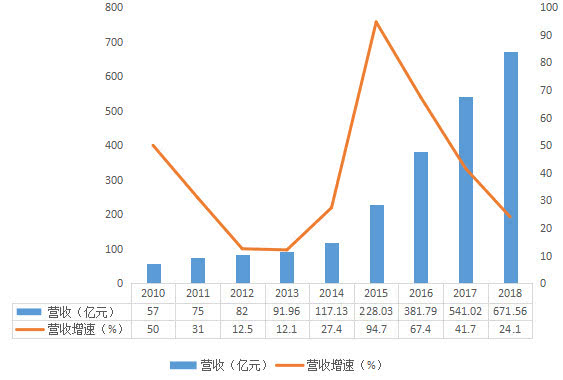 However, if we consider the year, NetEase's revenue growth rate will gradually slow down after reaching its peak in 2015, and it is now at a low level.

In 2015, thanks to the contribution of koala and the "Fantasy Westward Journey" mobile game version, "Yin Yang Shi" and other explosion games, Netease's total revenue growth rate reached 94.7%, the highest level since 2010. However, it is from this moment that the contribution of the game business began to decline, and the e-commerce business became the revenue engine of NetEase. 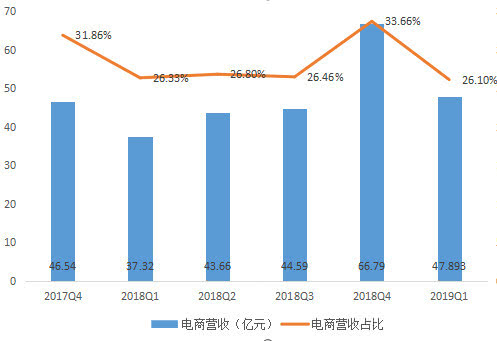 However, this trend reversed this quarter, with e-commerce accounting for 26.1% of total revenue, not only lower than last year's total, but also lower than the previous quarter's 33.66% and 26.33% in the same period last year.

In the revenue growth rate of e-commerce, this quarter was only 28.3%, setting a new low in the history of the business. 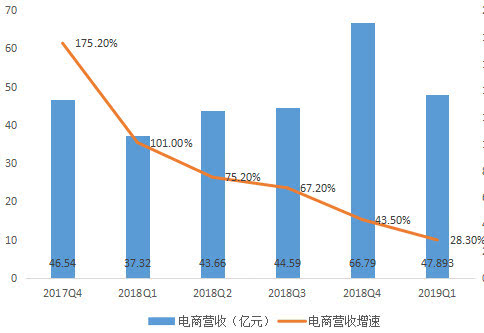 As can be seen from the figure, the growth rate of e-commerce revenue has fallen sharply in the past year. From this, it can almost be judged that the NetEase e-commerce business represented by koala and strict selection officially ended its rapid growth in 2018, and continued this trend in 2019.

During the quarter, the net revenue of online game services was RMB 11.852 billion (US$1.7657 billion), a year-on-year increase of 35.3%. The growth rate was not only higher than 28.3% of the e-commerce business. It was also the growth champion of all Netease revenue projects. . 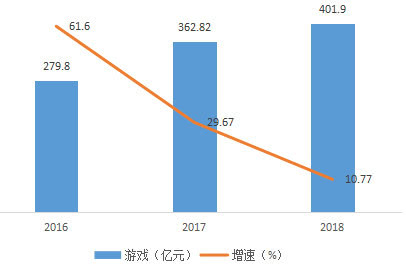 This means that the game business is re-emerging as Netease's revenue engine. In the past three years, the game business revenue has been experiencing a sharp decline in growth, from 61.6% in 2016 to 10.77% in 2018. This is also the development of e-commerce business by Ding Lei, hoping that it will become the background of the e-commerce engine.

However, since the third quarter of last year, with the problems in the e-commerce business, the game business has re-emerged in growth. 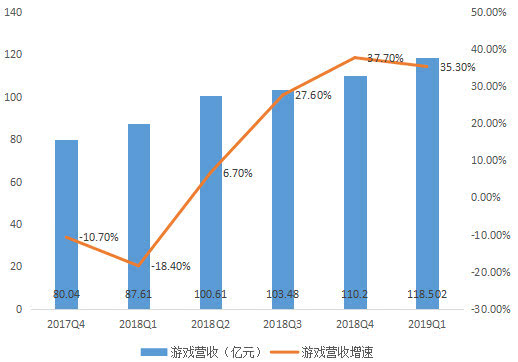 It can be seen that after the negative growth in the first quarter of last year, the growth rate of Netease games continued to increase in the second quarter, and even reached 37.7% in the previous quarter. With the slowdown and the slowdown in e-commerce business growth, the game business grew faster than e-commerce this quarter.

For the performance of the game business, NetEase gives several reasons:

The Westward Journey series of new expansions were released; "After tomorrow", "Yin Yang Shi" and "The Land of the Earth" have performed well in the games; "My World" has more than 200 million registered users in China; "Wild Action" is still in Japan. Being sought after, he re-launched the Japanese iOS bestseller list in March and May.

Net profitability of NetEase has rebounded significantly during the quarter. Among them, Netease's gross profit was 8.091 billion yuan, which was 7.657 billion yuan and 5.954 billion yuan in the previous quarter and the same period of last year, respectively.

The main hero is still the game business. The gross profit of the game for the quarter was 7.551 billion yuan, a year-on-year increase of 38.68%. Its gross profit margin was as high as 63.7%, which was an increase from 62.1% in the same period last year and 62.8% in the previous quarter.

The profitability of the e-commerce business has also rebounded. Its gross profit was 490 million yuan, a year-on-year increase of 37.6%. Netease explained that due to the increase in sales of koalas and strict selection and the improvement of procurement and operation efficiency.

In terms of net profit, Netease's promotion in this quarter is more obvious. 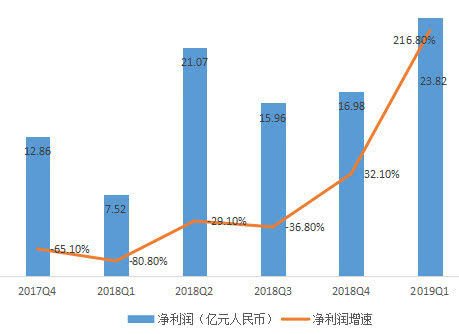 Net profit has been on the rise in recent quarters, making Netease's net profit for the full year last year down 42.5% year-on-year, which is expected to be curbed this year.

Related news
First line|Netease switching engine: game revenue growth rate super e-commerce, e-commerce growth rate and new low
E-commerce is difficult to create Netease
Has Netease become better after going to battle in light load?
Hot news this week
LG double screen mobile phone accessories ads lead to criticism: abnormal old man steals photos of beautiful women
Welcome to zen3! ASUS serial 11, three series AMD b550 motherboard
Microsoft speed! Windows 10 2021 will come next month
Seven manufacturers, such as Xiaomi, oppo and vivo, are too slow to join the mutual transmission alliance? On the spot
Three generations of sharp dragon make new! Amd ryzen 7 3750x / 3850x exposure: 105W super frequency little prince?
Intel updates Wi Fi and Bluetooth drivers for windows 10 systems
What does Huang Zheng want to say about the sudden change of letter style from pinduoduo to shareholders in 2020
LG Electronics will move two TV production lines from South Korea to Indonesia to improve global production efficiency
48 million main camera 120 Hz screen Redmi the most affordable 5 G mobile phone on the shelf :1799 yuan
I'm a Tesla leek for musk
The most popular news this week
Meizu 17 aircraft carrier limited edition is on sale today: the official promo is on fire!
Microsoft edge browser ushers in "surfing the Internet" game
Lu Weibing: Xiaomi is a global operating company, the European market has resumed 85-90%
Lenovo's new true wireless headset has a patented exposure profile similar to airpods
Nintendo sent a video review of "the collection! May in animal friends Society
Mozilla, reddit and twitter are calling for legislation to protect the privacy of Internet browsing
NASA's Mars rover will be equipped with instruments called Sherlock and Watson
What is the competitive advantage? Comparative analysis of Pixel 4a and iPhone SE 2(figure)
What great events have taken place in the field of space and space since the ten-year gap of manned flight in the United States?
Oakes was awarded compensation of 40 million yuan to Gree Dong Mingzhu: it is suggested to crack down on this "patent hooligan"