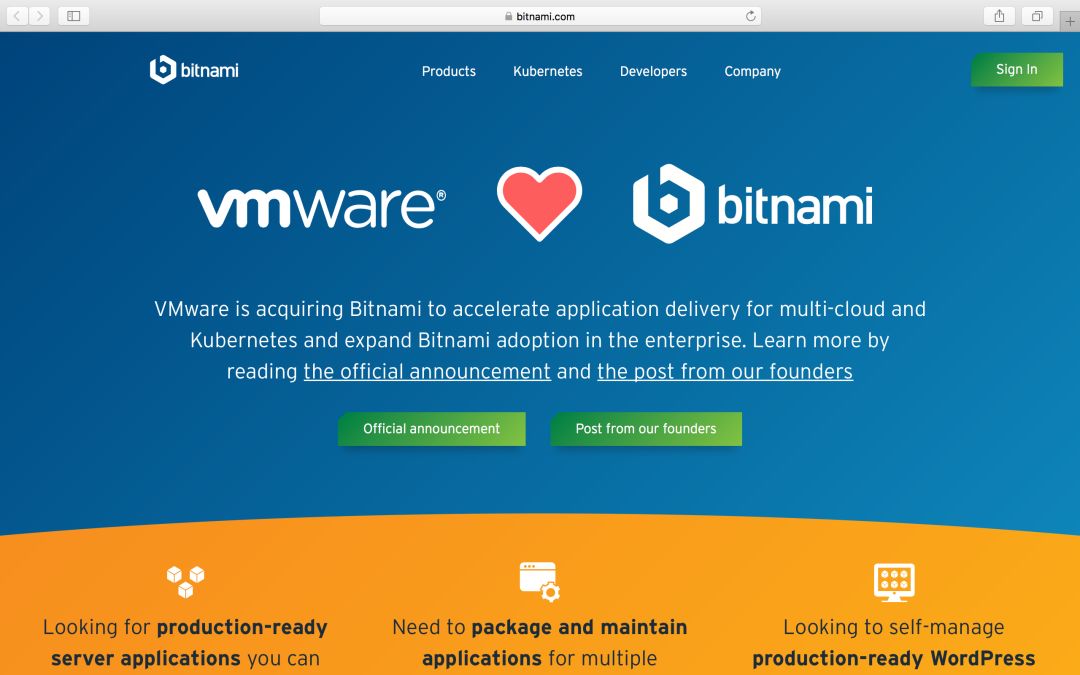 VMware CEO Pat Gelsinger is fulfilling its commitment to further integrate container technology into its company and announced plans to acquire Bitnami this morning. The amount of the acquisition is unknown. Bitnami specializes in application packaging technologies for containers and Kubernetes environments.

Shekar Ayyar, executive vice president of strategy and enterprise development at VMware and general manager of Telco NFV Group, explained in a blog post that the deal will accelerate VMware's cloudy and Kubernetes products.

Milin Desai, general manager of VMware's cloud services business unit, explained in an interview: “We have been working with Bitnami for some time, but acquiring it is a natural next step that will enable our customers to take full advantage of the VMware platform and the public. The cloud platform builds these new applications, whether they use container technology, traditional virtual machine technology, or native content using Kubernetes or compute instances. ”

Ayyar added: “Once the deal is reached, Bitnami's application packaging capabilities will help our customers simplify the use of applications in a hybrid cloud environment that spans the local environment, VMware Cloud on AWS, and the VMware Cloud Provider program. Partner cloud. ”

The purchase price was not disclosed, but Bitnami was established in 2011 and has raised $1.1 million. Desai said that the Bitnami team will be fully integrated into its department.

Just before the announcement of the deal, VMware spent $550 million to acquire Heptio. That deal boosted VMware's reputation in the Kubernetes community, as Heptio's two founders, Joe Beda and Craig McLuckie, both developed the Compute Engine on Google and the platform that recently became the Kubernetes project.

Heptio and Bitnami have also worked together, and the two companies have jointly developed the Ksonnet open source tool. Ksonnet is designed to simplify the way users configure applications deployed to Kubernetes clusters. However, after VMware acquired Heptio, it stopped development work on Ksonnet.

Desai said that those transactions and the acquisition of Bitnami indicate that VMware continues to “advance to the upstream”.

As you can see from Ayyar's words, VMware is still working on a model that runs Kubernetes orchestrated containers on virtual machines. This is also consistent with Gelsinger's past remarks that “all clouds are running containers in virtual machines. In short, this is the best way to run a container. ”

Gelsinger said at the end of last year that the container is one of the company's top three priorities in 2019, and the NSX platform and the ubiquitous cloud are two other priorities. He added that VMware's acquisition of Heptio enabled the company to "go to the forefront of container technology".

For VMware, this step is important because the company is considered to be behind industry rivals in focusing on containers.

Gregg Moskowitz, managing director and senior research analyst at Cowen & Company, noted in a report last year that “VMware continues to understate the wave of containers. “The good news for VMware is that we think most organizations will initially deploy containers in a vSphere environment,” he added. This should enable them to respond to container threats in the medium term. However, we believe that vSphere faces certain long-term risks. ”

Another trend that has emerged is the use of virtualization or software platforms like Kubernetes to replace virtual machines as the basis for cloud-native infrastructure deployment.