Yu Chengdong: Chips are not spare tires. Huawei also has the core ability to build an operating system. 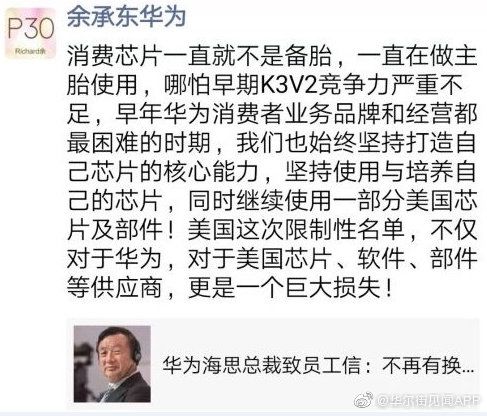 According to reports, for the US Department of Commerce's Bureau of Industry and Security (BIS) to include Huawei in the "list of entities", on the morning of May 17, Huawei's chip company Hesi Semiconductor President He Tingbo released an internal letter to employees It is said that Huawei has made the assumption of extreme survival many years ago. It is expected that one day, all advanced chips and technologies in the United States will not be available, and Huawei will continue to serve customers.

He Tingbo said that Hess will use the “prepared tires” plan to fulfill the company's commitment to customer continuous service to ensure the strategic safety of most of the company's products, the continuous supply of most products, “this is a historical choice. All the spare tires we have built, all overnight & & rsquo; turn positive & rsquo;! ”

Yu Chengdong forwarded the "Huawei Haisi President's Letter to Staff" in the circle of friends and said that consumer chips have not been spare tires and have been used as main tires. Even if the early K3V2 competitiveness is seriously insufficient, Huawei's consumer business brand and operation are the most difficult in the early years. In the period, Huawei has always insisted on building the core capabilities of its own chips, insisting on using and cultivating its own chips, while continuing to use some of the US chips and components. He believes that the US restricted list is not only for Huawei, but also a huge loss for US chips, software, components and other suppliers! (易科)