"Association succumbs to Huawei" for the rumor of the rumor: extreme speculation is too emotional

"Lenovo disconnectedHuaweiThe "creator" "grey machine" resumed the incident. He said that what he and several other witnesses did not do was to confirm the source of each other and wait patiently and calmly, and directly in the blood. Under the influence of irrational emotions, they respectively answered the extreme content of emotionalization in the corresponding knowledge, and vowed to increase the credibility of their answers with the words “real hammer”, “conclusive evidence” and “confirmed”. 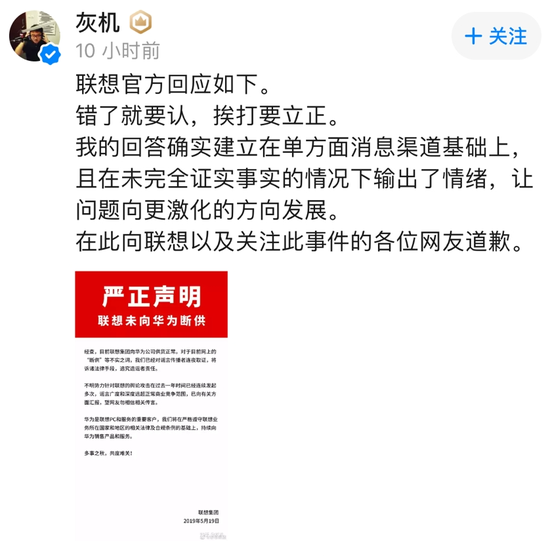 Well, emotional complaints and jealousy have passed, and so-called official instructions have come out.

To make a simple explanation and a re-issue, it is also a confession for the audience:

This Saturday (May 18th) from noon to afternoon, many friends including me who are concerned about the digital zone news have received rumors that "Huawei employees can't buy Lenovo computers", and we all pass our own acquaintances/classmates. Other channels tried to verify the news.

At that time, what I and several other witnesses did not do was to confirm the source of each other and wait patiently and calmly, and directly responded to the irrational emotions under the influence of irrational emotions. Emotional extreme content, and vowed to increase the credibility of their answers with the words "real hammer", "conclusive evidence" and "confirmed".

After many of my answers, the answers were passed to Weibo, some of our witnesses realized that they should calm down and verify the source. At this time (8 pm to 9 pm on May 18) we Only after discovering that their respective verification channels are very similar and only one party, that is, the broke/confirmer is one of the few Huawei employees. We did not get the reply and confirmation from Lenovo from beginning to end. And we have verified the news that some of the 48 hours of this Friday to Saturday (May 17-18), some Huawei employees can not purchase Lenovo computers (PC orserver"), and can not fully and reasonably prove that "Lenovo has been discontinued for Huawei because of the US blockade" mentioned in the answer.

After the Lenovo Group issued an announcement late at night on May 18, it was reported that some Huawei employees had recovered (or never lost) the channels for purchasing Lenovo computers. This is indeed a “face-to-face” for those of us who have answered the Lenovo-related questions with extreme vocabulary. To some extent, we are too full of confidence and emotional answers.

After I personally reflected, I decided to delete the original answer because I can confirm that the message channel is single and prone. Even if I modify the answer later, I can't save the emotionalization of the content that was initially screened, including the word "confirmed". The side effects of output in network propagation. Such a content that is not rigorous enough and objective is even more naive after the announcement of Lenovo's announcement, so I deleted the original answer and posted the announcement of Lenovo Group.

The comments under the original answer are deleted because they do not want other commentators who are affected by my initial answer to be harassed by others after the announcement is posted. They are also affected people and should not be accused too much.

There are other claimants/respondents who still insist on the original opinion and believe that the news/evidence they have received is sufficient to support the original argument. I respect their choices. Perhaps they get more news than I have, and the source is more extensive.

If you are wrong, you must recognize it and be assaulted.

I did come up with an exaggerated use of misleading conclusions because of a single channel, and there is propensity to use the evidence. Because the initial extremes of the future and the modified answers are spread to other social platforms, it leads to more serious consequence.

Here, on behalf of me personally, I apologize to Lenovo Group and apologize to all netizens who have been affected by my extreme speculation and emotional output. In the future, I will definitely be more rigorous and think twice before writing.

Lenovo's statement: Failure to provide Huawei with a confiscation

Related news
The new HUAWEI MateBook E evaluation: light office era self-help green paper
Disassembly report: Huawei freebuses 3 real wireless headset
Hot news this week
Challenge the fierce rival Intel amd Su Zifeng: This is just the beginning!
Musk is going to blow up the rocket tomorrow
Huawei mate XS Ministry of industry and information technology access: equipped with Kirin 990 5g, better hinge / screen
Can't OEM 16nm chips for Huawei? TSMC: hard to estimate but ready for changes in export control at any time
Samsung Galaxy a71 5g exposure: equipped with exynos 980, square four shot
Magic mobile phone protection shell, match 20 Pro for sale, match 30 Pro for second change
NetEase cloud music and station B could be the only two accidents
Unsealed Taobao account in 980: no malicious refund
TSMC denies being pressured by the us to set up factories in the US: there is no final decision at this stage
Samsung Galaxy a71 5g exposure: cheap "note10" with exynos 980 and square four shot
The most popular news this week
NetEase cloud music and station B could be the only two accidents
Microsoft CEO: technology companies should protect data privacy just like human rights
CAAC: no refund fee for air tickets from 0:00 on January 24
President of Xiaomi International: Xiaomi still wants to enter the US market dominated by apple and Samsung
Over 80 million yuan of contract has been awarded to golde infrared for the application of self-developed chips in the prevention and control of pneumonia
Huawei Developers Conference Announces Extension: Change to Live Online as a New Pneumonia Epidemic
Microsoft chromium edge stable edition ushers in the "new tab" after function improvement
Huawei P40 Pro toughened film spy exposure: the effect of increasing screen curvature is worth looking forward to
DxOMark announces iPhone 11 score: 109 points, just equal to Huawei P20 pro of the year before
Google and Mozilla are sending cake to Microsoft's new edge team