Microsoft also integrated Spotify into the Xbox Game Bar, allowing users to control song playback during the game. Can also passWindowsUse the winkey + G in 10 to activate the Xbox Game Bar's audio widget. If the user wants to switch the headset settings and then quickly return to the game, this new layout makes it clearer.

The Xbox Game Bar provides a list of Xbox friends, even the Find Groups (LFG) widget, which allows users to display multiple or fewer widgets as needed. The entire interface is customizable and the widgets can be fixed in place. The new Xbox Game Bar is suitable for most games, but Microsoft wants games built with the Vulkan API to run in windowed mode so that the Xbox Game Bar works.

The day before the official release of the Xbox Game Bar, Microsoft just released the Windows 10 May 2019 update. Although this update does not include game features, Microsoft is clearly solving some PC game defects through this Xbox Game Bar. 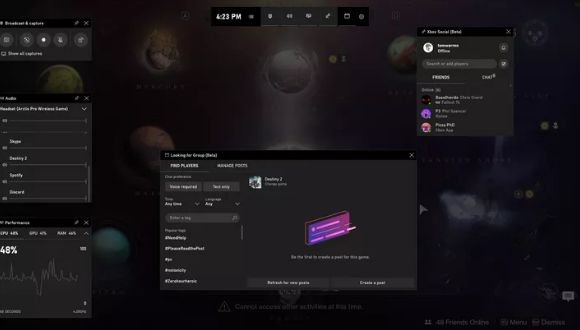