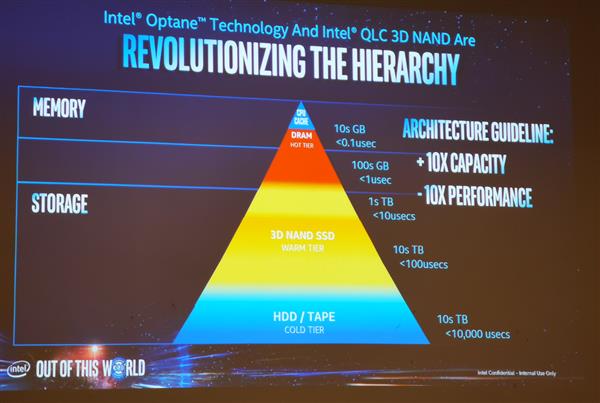 In the storage products, the previous article also mentioned Intel's philosophy, that is, there is a level between the HDD hard disk, 3D NAND and DRAM memory, this part is the arrogant hard disk, its capacity is DDR4 memory 10 times, no power loss when power is off, although the performance is only 1/10, but still better than NAND flashSSDThe hard drive is 10 times faster. 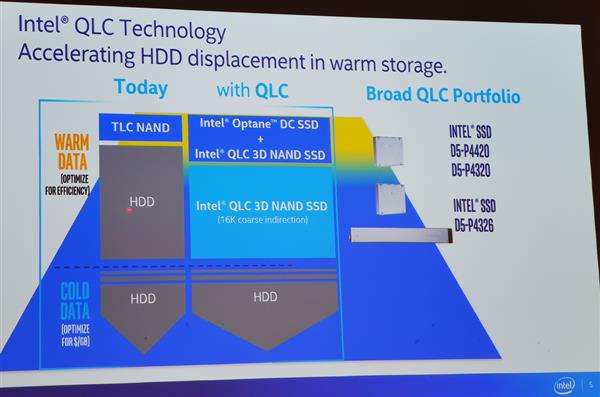 In Intel's vision, the future storage system will change significantly. The HDD mechanical hard disk will be replaced by QLC flash hard disk in the hot data, and it will be used as a large-capacity data backup.

From the point of view of Intel, in the current TLC+HDD format, not only the HDD hard disk will disappear, but also the TLC flash memory will be replaced, let alone the MLC flash memory. In short, it is the place where the performance needs to be arrogant flash or Aurora + QLC, which already has a product like the H10, uses a combination of high-capacity QLC flash and the Proud 16/32GB. 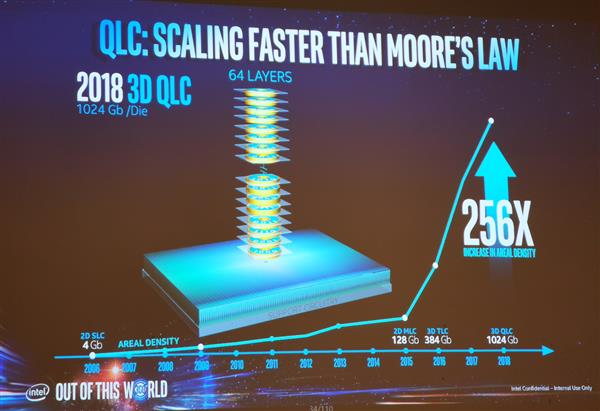 QLC flash memory is going to be a big deal in the future, and Intel is blunt about this. As for the QLC flash life performance issues that everyone is worried about, Intel said that their technology has already achieved the voltage control of QLC flash memory and TLC flash memory, so these concerns are not a problem. 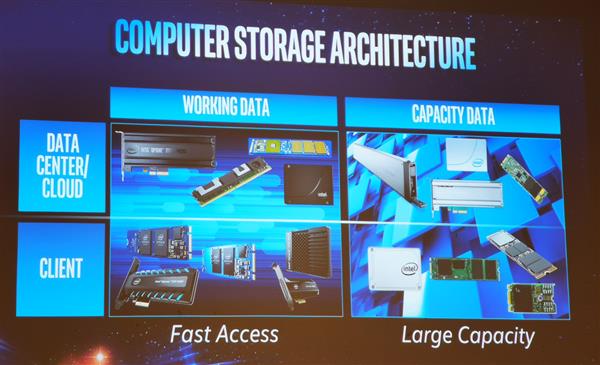 In short, in the storage market, regardless of the data center or client products, Intel has two choices, the pursuit of performance on the arrogant hard drive, PCIe, M.2, U.2, AIC various specifications, the pursuit If you have a large capacity, you can use a NAND flash drive. SATA, M.2, AIC, and even the latest Ruler specifications are available. The latter can do 32TB.

Related news
Intel pushes 128-layer NAND next year: QLC flash kills Quartet
Intel Planning Floating Grid 3D PLC Flash Memory: QLC stacked to 144 floors next year
Intel announces the roadmap for the development of new proud and 3D NAND flash memory in 2020
Cheung Kong Storage announces 128-layer QLC 3D NAND flash chip development
China just broke through 128 layer QLC flash memory, Samsung will launch 160 layer flash memory
Hot news this week
Bitcoin mining machine giant Yibang international successfully listed in the United States: raising more than $100 million
China's second-biggest retail channel for smartphones in May Huawei is a step away
Huawei cloud's industrial Internet business experience: how to make the cloud serve the entire "circle of friends"?
Huawei's first mobile device equipped with Hongmeng may be Kirin 1020 with a 5-nm process
After the total ban, the United States announced the arrest of Fujian Jinhua General Manager Chen Zhengkun!
Japanese legislation forbids walking and playing mobile phones: mobile phones in public places should stand still
NASA announces the name of the headquarters building after its first black female Engineer
A reporter from the United States who was infected with the new coronavirus took part in the trump campaign rally
Most people don't know that the hole at the bottom of the original mobile phone also has this function
A hundred yuan 5g mobile phone is not far away. It's said that the new mt6853 of MediaTek has been launched
The most popular news this week
Wechat has not done this function for N years! Use this app to make up for the defects of wechat
Zhao Ming responds to the offline interview with Yu Chengdong: the pressure this year is much greater than that of last year. Huawei glory is the only two growth brand
How long will it take for a real 1000 yuan 5g mobile phone? Zhao Ming: we have to wait
Glory Zhao Ming: 5g mobile phones account for nearly 50%
Byte beat vice president reconnects Tencent?
It's incredible that Intel will push the z590 chipset pci4.0 early next year?
Selling business out of multinational market
What is the status quo of domestic memory chips?
Zhao Ming talks about 5 G mobile phone competition: do a good job of products without gimmick
What are the difficulties of large screen mobile phones in 5g era? Glory Zhao Ming: it's hard to change it after two years' sharpening